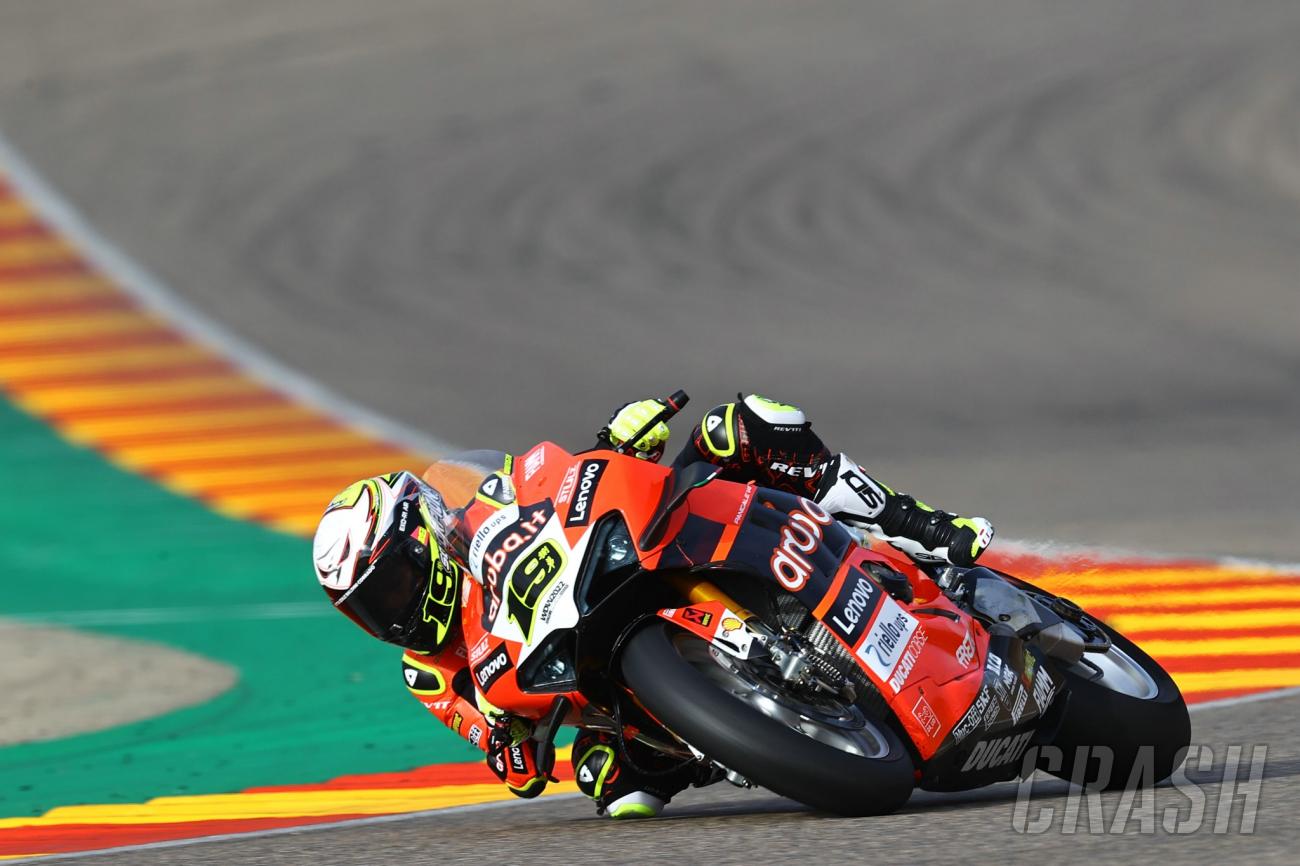 After setting a new Superbike World Tour record from Aragon in Superpole, Toprak Razgatlioglu started the second race of the weekend on pole.

And as in the first race, there was an immediate change between Razgatlioglu and Alvaro Bautista.

The Ducati rider was extremely aggressive as he forced his way through turn four, however, Razgatlioglu fought back straight away to regain the lead at turn five.

Not content with P2, Bautista made an even more aggressive move at turn seven as the two contacted.

After being slightly pushed aside, Razgatlioglu was then hit in the back of his R1 by Jonathan Rea who was eager to join in the fun.

Hoping to win his first race since returning to Ducati, Bautista started to pull the pin at the end of lap one but the poleman responded on lap two.

While trying to stay with Bautista, Razgatlioglu started making several mistakes as he swerved into turns one and seven.

Bautista’s lead at the end of lap three was over a second, while teammate Michael Rinaldi made a brilliant shot at Rea for third place.

Rea got back to Rinaldi at turn seven before the latter was completely out of shape approaching turn eight.

Continuing to hammer home his advantage, Bautista led by 1.3 seconds at the end of lap four.

After passing Razgatlioglu for P2, Rea momentarily lost the front at turn seven which kept the world champion close.

Staying close wasn’t enough for the Turkish driver as he leapt into Turn 16. As Razgatlioglu, Rea and Rinaldi continued their epic battle for second place, Bautista had a more than three-second lead in what was quickly becoming a repeat of 2019 in Aragon.

As Rea attempted to descend inside Razgatlioglu again, both riders braked poorly for turn one as Rinaldi shifted from fourth to second.

As Bautista gained more than five seconds, Rea reclaimed second place ahead of Rinaldi before the Italian was demoted to fourth following contact with Razgatlioglu on the final corner.

Rinaldi attempted to close the gate on the inside of Turn 16, but Razgatlioglu forced his Yamaha to adapt as he advanced in time for the start-finish line.

Heading into the final lap, Rinaldi was visibly annoyed by Rea cutting on the inside at turn seven, as the six-time world champion was close to cutting the front of Rinaldi’s Panigale V4 R on more than one occasion.

After the final overtake with Razgatlioglu which produced even more contact, Rinaldi was seen waving his hands and shaking his head after the flag, making it clear that the ‘tough but fair’ type of racing was too ‘tough’.

Iker Lecuona, Xavi Vierge and Philipp Oettl showed boldness before the start of the race by choosing to use Pirelli’s brand new SCQ (Superpole specific) tyre.

Update: Michael Van Der Mark looks set to return for his home round in Assen on April 22-24.