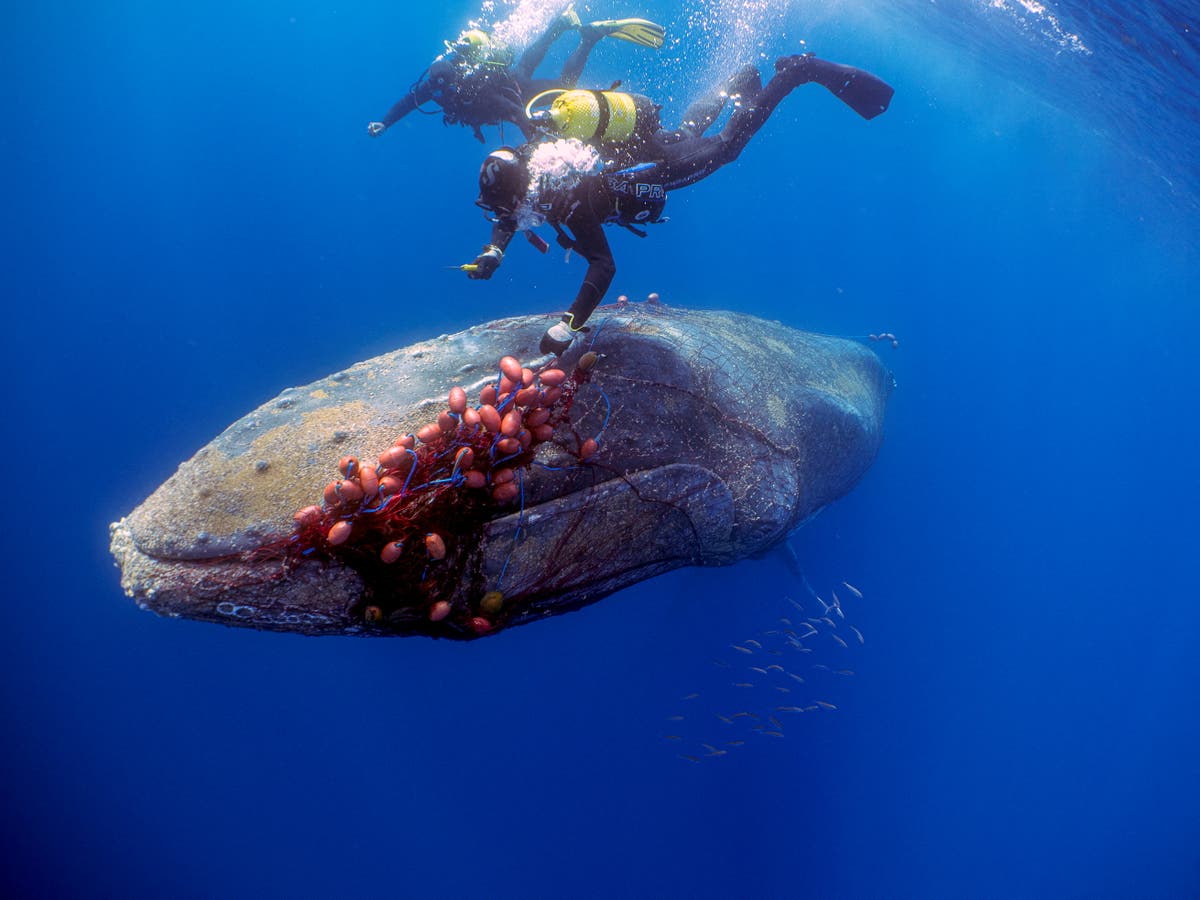 A rare 12-metre-long humpback whale in Mallorca, Spain, gives a ‘little nod of thanks’ to rescuers

The reactions of a 12-meter-long humpback whale and its ‘small thank you’ gesture to a group of Spanish divers who rescued it from a driftnet was ‘just incredible’, says one of the rescuers .

The whale had been spotted by a vessel three miles off the east coast of Mallorca on the Balearic Islands, where sightings of such whales are rare, having only been reported twice before.

Gigi Torras, a 32-year-old marine biologist who was part of the rescue group, said the whale’s gesture was the “best” birthday present for her.

“It was like out of this world, it was amazing, just amazing,” she told Reuters news agency on Tuesday.

The successful rescue took place on May 20.

Officials said they spotted the frail whale trapped completely inside a red net, so much so that the mammal couldn’t even open its mouth.

Upon learning of the existence of the trapped whale, staff at the Palma de Mallorca Aquarium sprang into action.

During the initial rescue effort, members of the Marine Wing attempted to cut a boat’s net, but soon realized they would have to get closer to the whale to make an impact.

Divers from Albatros and Skualo dive centers were roped in on May 20.

The crew then dived alongside the whale to cut the mesh with knives, completing the rescue operation in 45 minutes.

Ms Torras, owner of the Albatros diving center, told how crew members saw the humpback whale calm down after an initial nervous phase.

“The first 10 seconds she got a little nervous, you know, like bubbles all over the place, but then I don’t know, call me crazy but I think she knew we were there to help her and she s just relaxed and we started working from the front of her upside-down mouth,” she said.

She added that the team continued to “cut and cut” after which the mammal gave a small movement to free itself from the net.

The whale, she said, then stayed a bit to regain strength as four divers gave her company.

But before swimming away after the escape, the mammal appeared to give what looked like “a little nod of thanks”.

The UN banned driftnets 30 years ago because they posed a serious threat to aquatic life.

Virtually invisible to marine life, driftnets float from a cork line and reach a depth of 50 feet to catch fish – but they can also kill a range of marine life, including larger underwater mammals. marine life such as whales, seals and dolphins, as well as seabirds.

2022-05-25
Previous Post: More than 10,815 people have crossed the borders of Ceuta in Spain and Morocco since the reopening
Next Post: Automotive Sliding Roof Market Size and Forecast