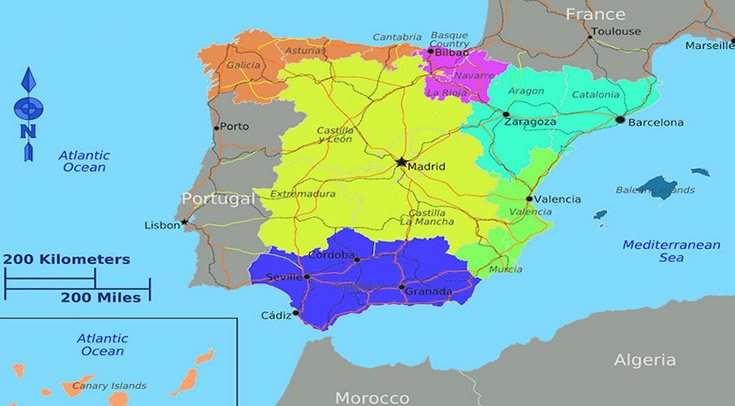 A unique city built in the shape of Spain

In 2019, Spain had 8,131 municipalities spread across its entire territory. In recent years, the merger of towns and small towns has been the order of the day, due to the economic and functional problems of some after the economic crisis.

Municipalities usually have their boundaries dictated by the area they cover on the land map of Spain, but a city of just 14,000 people was custom built to resemble the outline of Spain. Only 20 km from Barcelona, ​​in the autonomous community of Catalonia, lies Badia del Valles.

This city is the birthplace of one of the most famous players in Spanish football, Sergio Busquets. It was built in the 1970s, with the idea of ​​reproducing the map of Spain. Thus, some of its streets represent the territory of our country, even with the corresponding boundaries.

The public schools located in the Valles Occidental, La Sardana, La Jota and La Muñeira, have even been named after regional Spanish dances. Likewise, the Cantabrian and Mediterranean avenues delimit the town, as well as other streets bearing the name of La Mancha, Burgos and Santander.

They are all located in the outline of the city at their corresponding position on a map of Spain. Calle Algarve is located where the border between Spain and Portugal would be.

This unique municipality was created to alleviate the high concentration of immigration to Catalonia from other regions of Spain. The Ministry of Housing has planned over 12,000 social housing units, although in the end only around 5,000 were built. Juan Carlos I and Doña Sofia were invited as guests to the inauguration of the city.

Originally, the municipality depended on neighboring towns such as Cerdanyola del Valles and Barbera del Valles, until in 1994 it was declared independent. Until today, the city has enjoyed local autonomy and can proudly present itself as the only city created from the map of Spain, as reported larazon.es.

Thanks for reading, and don’t forget to check out The Euro Weekly News for all your up-to-date local and international news, and don’t forget, you can also follow us on Facebook and Instagram.