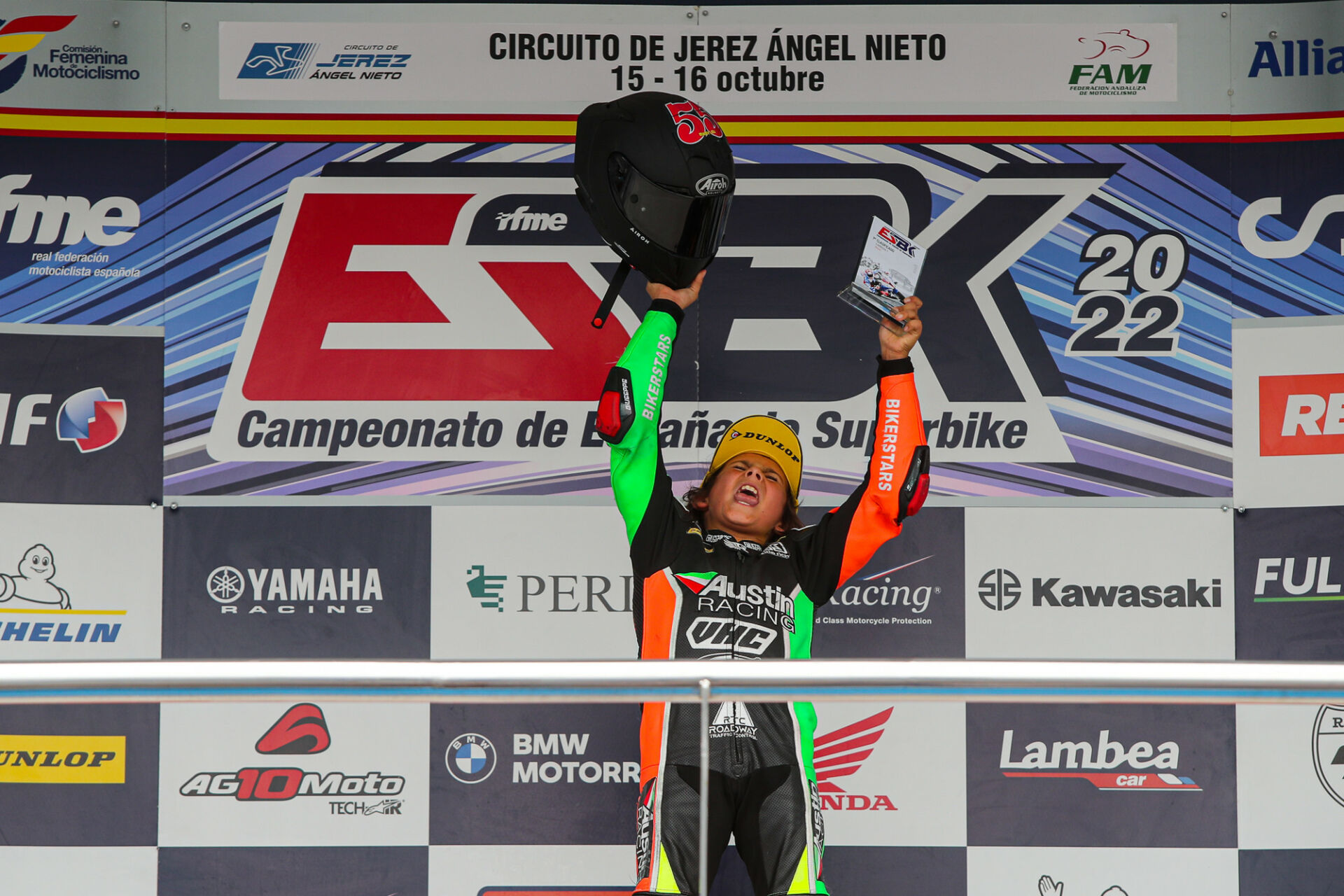 The last round of the ESBK – Spanish Superbike Championship lived up to expectations. The Jerez Ángel Nieto circuit has put the finishing touches to a fabulous season where there has been a lot of emotion in all categories. In addition, it was possible to follow rigorously live on the RFME Youtube channel.

With the title fight still to be decided, it would be Yeray Ruiz and Julián Grial who would fight for it. We live in a very tight race. Dani Muñoz put in a perfect performance leading from start to finish and leaving the championship fight behind him. Ruiz remained firm in second place, withstanding Giral’s constant attacks. Finally, Yeray, with his second place, secured the title of Spanish SuperSport NG Champion.

In the SuperStock 600 category, Eric Fernández, despite signing a weekend full of trials, with a fall in training, a sick leave on Saturday and a fall in today’s race, was proclaimed champion in its category. Brett Roberts, Carlos Valle and Maxwell Toth made up the podium of the race. The ELF Moto Challenge was won in this event by Croatian MDR Martin Vugrinec.

Borja Gómez started to shoot very hard in the Superbike category, closely marked by Óscar Gutiérrez and Tito Rabat himself. Halfway through the race, Óscar was in the lead, setting new, stronger pace, but he crashed on lap 11, leaving Gómez free to go. With the distance well taken from Rabat, the Cardoso Racing player managed this difference, guaranteeing the double and the place of vice-champion in Spain. For his part, Ivo Lopes made a comeback race and with a few laps to go he was able to overtake Odendaal and secure third place.

In Stock1000, Daniel Sáez, Eduardo Montero and Mathias Poulsen made up the last podium of the year. The Challenge ELF Moto trophy goes to Oscar Gutiérrez, who is also the big winner of the season.

There couldn’t be a more unexpected ending for the small category. Yesterday’s race was virtually a knockout as the top three on the points table crashed out. The fourth in the running, Miroslavov, took the victory and was placed as a firm candidate for the title. Today the race was crazy, battling against a group of ten riders in the lead until the checkered flag. Anything could happen, but in the end it was Michael Sanchez who crossed the finish line first, followed by Iaroslav Karpushin and Ignacio Galán. For his part, Miroslavov managed to finish seventh, a position which earned him the title of Spanish Moto4 Champion.

With the title already in Pepe Osuna’s pocket, SBK Junior’s career defined the runner-up. In addition, the 2022 Ibero-American SSP300 champion would come out of the two-race tally.

A very crazy race from the start with a very large group where they didn’t stop dancing the positions. Uriostegui, Julio García and Pepe Osuna occupied the three leading positions and a little later Antonio Torres signed… Fight without a quarterback between Deza Box 77 and ESP Solutions. Finally, Osuna won with García and Torres very close to his wheel and with the first 8 in the same second!

The Ibero-American Championship was won by Pepe Osuna, with Torres as runner-up and García as third-placed. In the Kawasaki Ninja Spirit Trophy the podium was composed of Pepe Osuna, Julio García and Antonio Torres, while that of the Yamaha Blu cRU Challenge by Unai Calatayud, Eduardo Agostón and Gonzalo Sánchez.

The award for best team in the Silkolene REDD Challenge category went to Deza Box 77, who ultimately also won the season champion plaque.

The last race of the year had David González and Álex Longarela as protagonists. Both riders broke away and set a higher pace than the chasing group of Carlos Cano, Pedro Alomar and Eduardo Gutiérrez. After a very fast race, González took the win, with Longarela right behind him. Twenty seconds later, the fight for third place was extremely close. A photo-finish finish in which Eduardo Gutiérrez put his bike in thousandths to those of Cano and Alomar. Finally, Gutiérrez was penalised, leaving third place to Cano.

In Promo3, Valentin Perrone won, Jesús Torres and Elliot Kassigian closing the podium. In Cuna de Campeones the podium was the same.

In the category of physically disabled pilots, it was once again Samuele Bertolasio who set the standard. Doubtless double and title of European champion for him. After the Italian, Troisi and Horky qualified.

Bad luck for the only Spanish representative on the grid. Antonio Montoya crashed on the penultimate lap while leading the 600m category, but his good advantage in the provisional classification allowed him to become European Handy Cup champion.

This ends a fascinating season and preparations begin for next year, which will arrive full of surprises, coinciding with the centenary of the Royal Spanish Motorcycle Federation. An extensive gallery will be released tomorrow with the 2022 Gala of Champions, which takes place this afternoon, and action shots from this race weekend.