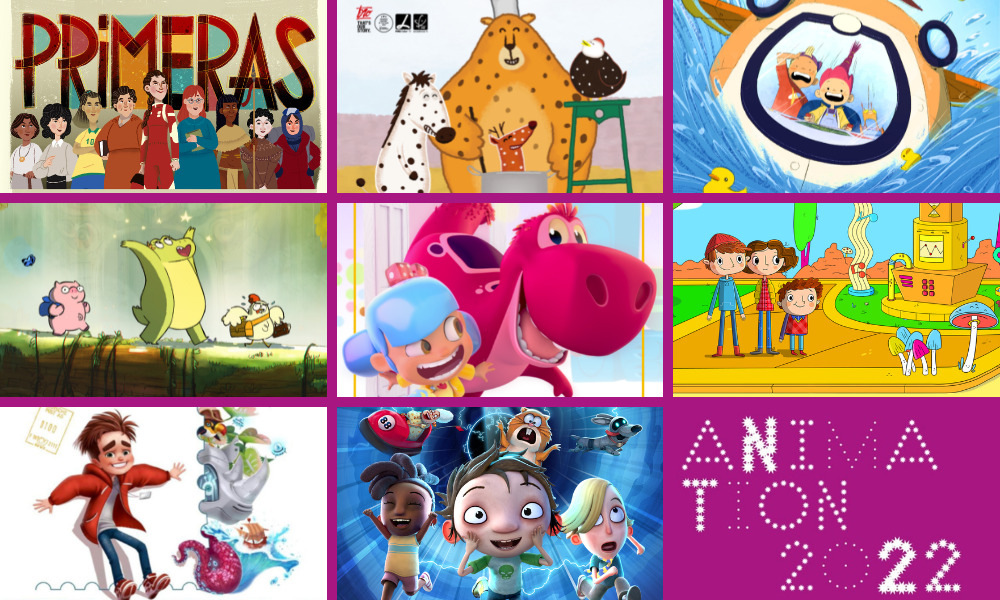 As animation players from across Europe and around the world prepare to gather again in Toulouse, France, for the 2022 edition cartoon forum (Sept. 19-22), ICEX-Invest in Spain presents an overview of the Spanish animation projects participating in the great television pitch festival and an introduction to potential partners around the world.

To support the country’s growing audiovisual market, ICEX recently launched the Spanish audiovisual office, a centralized point for all information related to the internationalization of the audiovisual industry (including animation), both to attract investments and filming in Spain, and to allow Spanish companies and productions to develop their overseas projects. This is in addition to improvement tax incentives in Spain for foreign productions (tax reduction of 30% on the first million euros, 25% beyond for 1 to 3 million euros per production) as well as regional discounts in the Canary Islands (50% for 1 million euros, 45% beyond, up to 18M euros deduction) and Navarre (40% tax reduction).

Of course, the animation community may already know the production companies representing Spain at the Cartoon Forum thanks to the annual event Who’s who Animation of Spain Guidepublished by ICEX and dedicated to Spanish companies in the animation and visual effects sector that have active projects and international potential. This is an in-depth guide to the country’s animation production and distribution companies, with their contact details, as well as profiles of technology services companies related to animation and visual effects. It is free to download from this link.

In Efecto Atlantis
In Efecto Atlantis (inefecto.com), an animation studio based on the paradise island of Tenerife, which offers creative and innovative content for television series and feature films. A winning combination of creative talent and in-house production tools allows us to offer a full range of services, from pre-production to full color grading and final delivery.

Bertie’s Brainwaves
52 x 11′ / 6-9 years old
Synopsis: Like most 10-year-olds, Bertie has a wild imagination. But while the weird things the other kids think of stay safe in their noggins, Bertie’s imagination is so powerful it can’t be contained! The things he imagines explode from his brain and become 100% REAL, transforming the world around him and throwing Bertie and his best friends, Donna and Eugene, into bizarre adventures only Bertie could have imagined.

Kicking the Door Prod.
A new Barcelona-based production company focused on animation created by screenwriter Marie Beardmore (screenwriter of many successful TV series such as ​angry birds and ​Supersonic Detonation). In addition to developing its own shows, KTD (kickthedoorproductions.com) also develops and executes products for third parties.

Mervin’s album
52 x 13′ / 6-9 years old
Synopsis: Mervyn is able to enter the world inside postage stamps. From Tesla to Titanic and dragons to aliens, Mervyn visits everything and everyone ever featured on a stamp. Additionally, he can create realities inside Stamp Realm by doodling his own stamps. Breathtaking adventures and a hilarious mishmash – we’re going to have fun! However, Stamp Realm also has a darker side: a group of questionable types plot to cross the gap between fantasy land and reality.

Mago Production
A Barcelona-based audiovisual production company specializing in animation. In 20 years of experience, she has produced several animated series for television, as well as short films, documentaries and two feature films. Values ​​such as multiculturalism, creativity and originality are the basis of the company’s projects and the teams of professionals who bring them to life. Mago Production (magoproduction.com) has additional offices in Perpignan, Düsseldorf, Mexico City and Tokyo, and most of its projects are co-produced internationally.

The little orchestra
26 x 11′ / 6-9 years old
Synopsis: Toto, Vale and Julen are three friends who love music as much as they love getting in trouble. With Grandpa John Beard, a legendary ex-roadie who still has his old truck, the band will visit strange characters and try to reveal the secrets of music. Or have a fantastic adventure anyway. Either way, The Little Orchestra will play and viewers will learn how a song is composed!

Mr. Klaus Studio
Founded in 2015 by a team with 20 years of experience in the animation industry, this creative studio has collaborated with major companies such as Cartoon Network, Nickelodeon, Disney Channel, Canal+ and Anima. Mr. Klaus Studio (mrklausstudio.com) was born to create and produce its own stories with a unique look & feel. With four original ideas already developed for the TV series, the studio firmly believes in and supports the talent of independent producers, thus high-quality animation products created with passion and maximum attention to quality are developed.

My brother is a T-Rez
52 x 7′ / 4-6 years old
Synopsis: Coco is six years old and loves spending time making up stories: yesterday it was a pirate tale, today it’s a western. To create them, she just needs her own imagination and some accessories she made herself. It might seem pretty normal for a girl her age, but hey! Wait a minute! His little brother happens to be a T-Rex! The adventures of Coco and Rez will be incredible, even if it seems that her little brother is a little impulsive and not very patient…

Cuckoo Animation
A production and distribution company founded in Barcelona in 2015. Peekaboo Animation (coucouanimation.com) focuses on the development, production and financing of animated content for children, mainly broadcast series, as well as services to third parties in the audiovisual and publishing sectors. Their portfolio includes stocks such as Me, Elvis Riboldi, Rocky Kwaterner and Mironines, winner of the Gaudí award for best animated film. They are currently developing a slate of several series ranging from educational preschoolers to edgy comedies for kids.

Best Friends Forever… Stranded! (BFFS)
40 x 11′ / 8-10 years old
Synopsis: Frank is a rooster with dreams of becoming a famous writer, so he leaves the farm with his faithful companion, Chops the pig, and heads for the Big City. However, there is a big storm and their boat runs aground on an island in the middle of nowhere, where they meet Charli, the vegan crocodile, and form a unique bond. Soon they will discover that the island hides a secret prophecy that is driving everyone crazy, and they will experience crazy and bizarre adventures.

Studio Kimchi
Founded in 2016, Studio Kimchi, based in Barcelona (studiokimchi.com) was born out of a passion for creating animated stories in all formats: short films, commissions for brands (such as LEGO, UNHCR, Nutella, Polaroid and Southeastern Guide Dogs) and the development and production of its own projects. The passion for good stories with rich characters connects all of Studio Kimchi’s projects. There is meticulous attention to detail from pre-production to post-production to produce quality content that gives audiences stories to connect with.

Zoey Oceans
26 x 13′ / 7-9 years old
Synopsis: It’s been five years since Zoey’s father’s ship went missing on the high seas, with the cargo of rubber ducks it was carrying being the only thing left afloat. Since then, these ducklings have washed up all over the world, and while most people assume Zoey’s dad will never come back, she never gives up hope. If those ducklings are showing up everywhere, then maybe his dad could show up somewhere too!

Polka Dot Zebra
42 x 5´ / 2-5 years
Synopsis: Bella is a little zebra who was born with spots instead of stripes. Any other zebra would feel like a misfit, but Bella doesn’t. She belongs to the Polka Dots, the most varied clan of the savannah, made up of a hen, a leopard and a deer. Thanks to the polka dots, Bella has learned that being different is normal and much more fun!

TV ON Productions
TV ON Productions (tvonproducciones.com) is a production company created in 2000 in Valencia (Spain), under the direction of Paloma Mora, a long-term producer in the audiovisual field and also CEO of Admirable Films. Previous animation productions include Sex Symbols, Selection Process, Criticla Lione, Bita and Cora’s Diary and The cryptozoologist.

Firsts
13 x 11′ / Ages +7
Synopsis: An anthological and animated show retracing the lives of women from all over the world who have become pioneers in fields hitherto reserved only for men. With passion and determination, these young women decide to push the limits and change the rules to achieve their dreams. In doing so, they became the “first” to enter fields such as sports, science, arts and social movements.