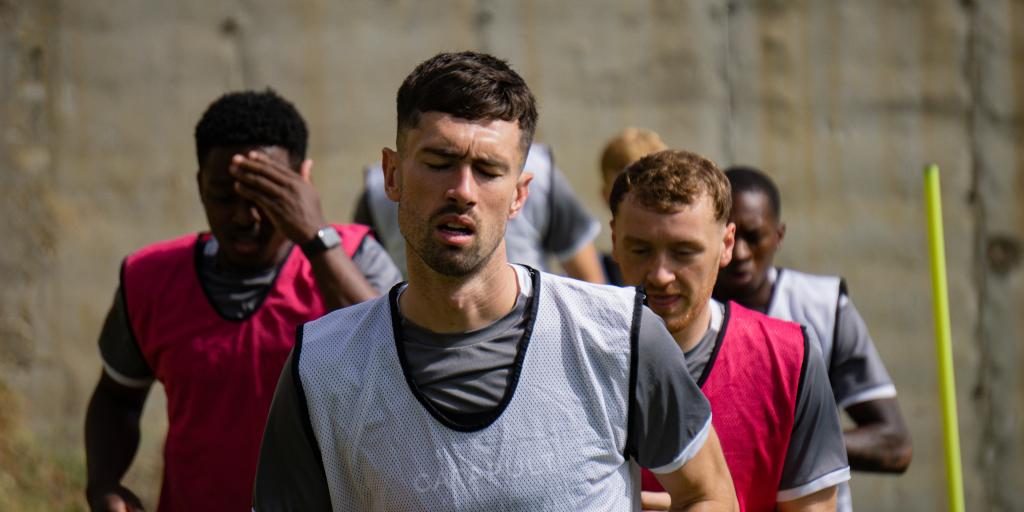 Since I worked at Argyle and got around the players a lot during that time, one of the main differences between them and us mere mortals is their incredible drive, fitness and work ethic.

Yes they are paid to do it yes they have great coaches and people around them to help them and yes they have decent facilities but I am still struck by their mental drive to race, to work and improve.

But even a year of being close to the team, watching them train, being with them when they eat, when they relax, even after a whole season, I was blown away by just one day here in Spain .

I’ll take you back at 11 o’clock yesterday morning, the first day of training camp. Charlie Rose and I walk quietly to the practice grounds. It’s about a 1km walk through some residential streets. No hills or anything particularly difficult, but even then it’s hot. The twenteeth.

We arrive on the ground and we settle down. A few minutes later, players rush through the doors after walking the short distance to the hotel. I know, not so impressive, they ran a little over 1000 meters, but that’s just the start.

Steven Schumacher collects them and prepares the stand for the day.

“We’re going to do some work in the gym to start with and then we’ll be out on the pitches. We have two sessions planned, this morning it will be with Elliot, it will be high intensity work, a lot of running, a lot of pressing. Then this afternoon we’ll do some technique and work on form.

Half an hour in the gym, relaxing, stretching, getting ready, then out on the courts.

After a short warm-up, they return.

Fast, short and high intensity games. They go all out, in small teams for 10 minutes.

Two on two with two small goals at each end and a coach to play one-two with. The pace is fast, it’s intense but the quality is incredible.

Finley Craske and Joe Edwards take on Ryan Hardie and Alfie Lewis. The ball is fed, Alfie takes it, drives to Fin, slides it to Hardie, a quick one-two with Mark Hughes and a split finish into the side netting. Bang, the next four are in place.

There is not a moment of rest, the moment they catch their breath, they are back in the ring.

Constant discussion from the touchlines, with the gaffer, Nance and Hughesy all offering encouragement and urging the guys to keep going, to dig deeper.

I’ve been lucky enough to see these guys practice from time to time throughout the season and, of course, I’ve seen them play every week. But still, I’m shocked at how fast they are, how fit they are. These guys are serious athletes and they invest.

Another exercise, but the same intensity. To pass, to move, to press. It’s relentless.

I rush for 20 minutes to write a story for the website. I find a quiet place to jot down a few words about our Sky Bet League One match with Port Vale being moved to a Friday night.

As I write, I hear the cries of the pitches.

“Keep working Jeps”, “Push, press, press”, “Come on Lawsy, shut it up.” The sounds of training.

When I’m done, I put my laptop back in my bag and walk to the side of the pitch. The guys have just finished their last exercise and are together to hydrate. A large cooler filled with ice water awaits them while Elliot explains the last part of the morning session.

Now, coming from seeing the work the players just put in during the first hour of the morning, I was kind of expecting it to be a little less intense to finish. How wrong was I?

The shuttle operates, in groups of three, for three sets.

The matador, Turner in the middle. He explained the task, he rolled up his sleeves so that his workout top looked like a vest. Shouting from midfield: “Ready boys? Three. Of them. A…” They left.

And they go hard. It’s not just a light warm-up, it’s a high-intensity race.

I watch them with a slight mixture of horror and amazement, I can’t believe they are still going and still going so fast.

Joe has his top at this point and is leading his small group of three. Head looking straight ahead, eyes focused.

“It’s a machine. Joe is a machine. I turn around and see Panutche Camara sitting in the chair behind. He did his job for the day and now, like me, he enjoys the show.

I agree, it’s a machine. All guys are.

After about 20 minutes, it’s over. Water is dispensed and Elliot ends the session.

It’s just past noon and the sun is beating down, the work the players have put in during this first session has been grueling.

“You guys will be thanking us for the season, when we fight for this result. That’s what it’s all about.” The gaffer barks as he walks behind the players off the field and towards the locker room.

I’m walking back to the hotel, myself slightly sweaty from being exposed to the sun when a terrifying thought occurs to me – “They have to start all over again this afternoon.”

These guys are gladiators.