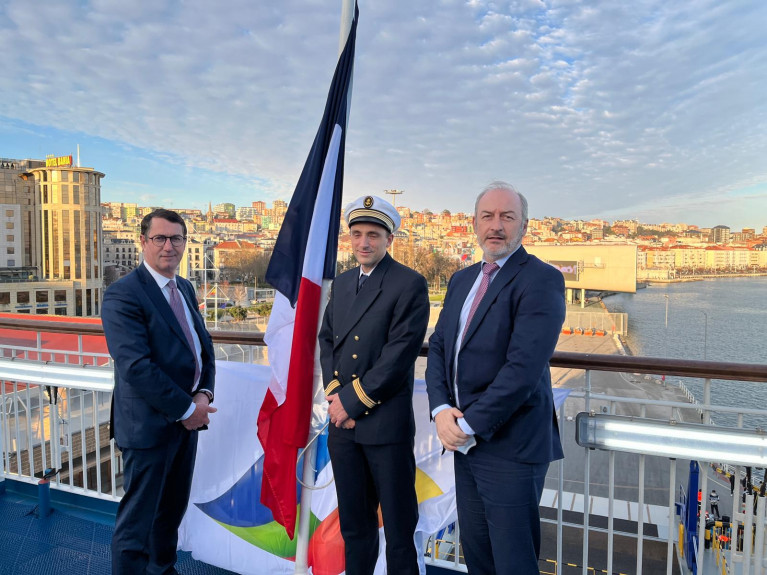 Brittany Ferries’ newest and greenest ferry in northern Spain at the port of Santander saw an official French tricolor flag-raising ceremony aboard Salamanca.

(New build Afloat adds follows Stena RoRo charter in E-Flexers) which began with Galicia joining in 2020 and Santoña joining the French fleet in 2023. All are powered by liquefied natural gas (LPG) .

Tuesday’s ceremony in Salamanca actually involved a reflagging as the red, white and blue flag of the French flag proudly replaced the Cypriot flag under which the ferry sailed to Europe from its shipyard in China.

The reflagging of Salamanca means that the ferry is now also officially registered in France and part of the French merchant fleet with a crew from the same nation.

The hull of the ship no longer only bears the name of a Spanish city of arts and culture, Salamanca (Castilla y León). It also includes, like all the company’s Breton ferries, that of Morlaix, the municipality of Finistère where the ship is officially registered.

Salamanca becomes one of nine ships to sail under the French flag for Brittany Ferries, the largest employer of French seafarers. Being registered in France means that French law applies on board the vessel. It also requires the vessel to comply with stringent French rules and regulations relating to ownership, safety, security, environment and crew.

Salamanca is Brittany Ferries’ greenest ship that runs on liquefied natural gas (LNG) and emits virtually no sulfur dioxide, nitrogen dioxide or particulate matter after combustion. In addition, since LNG burns more efficiently than diesel, the production of carbon dioxide (CO2) is reduced by around 25%. The new construction is the first French ferry in terms of energy transition: one of the largest, most modern and cleanest in the European Union.

After dry-docking, crew training and berthing trials, Salamanca will enter service on March 27 to carry passengers and cargo on routes from Bilbao, Spain, and Cherbourg to Portsmouth, UK. United.

By 2025, five new ships will join the company’s fleet.

As mentioned above, Galicia entered service in 2020, followed by Salamanca in 2022 and Santoña in 2023, both powered by liquefied natural gas.

As Afloat also announced, they will be joined by two hybrid LNG/electric vessels in 2024 and 2025.