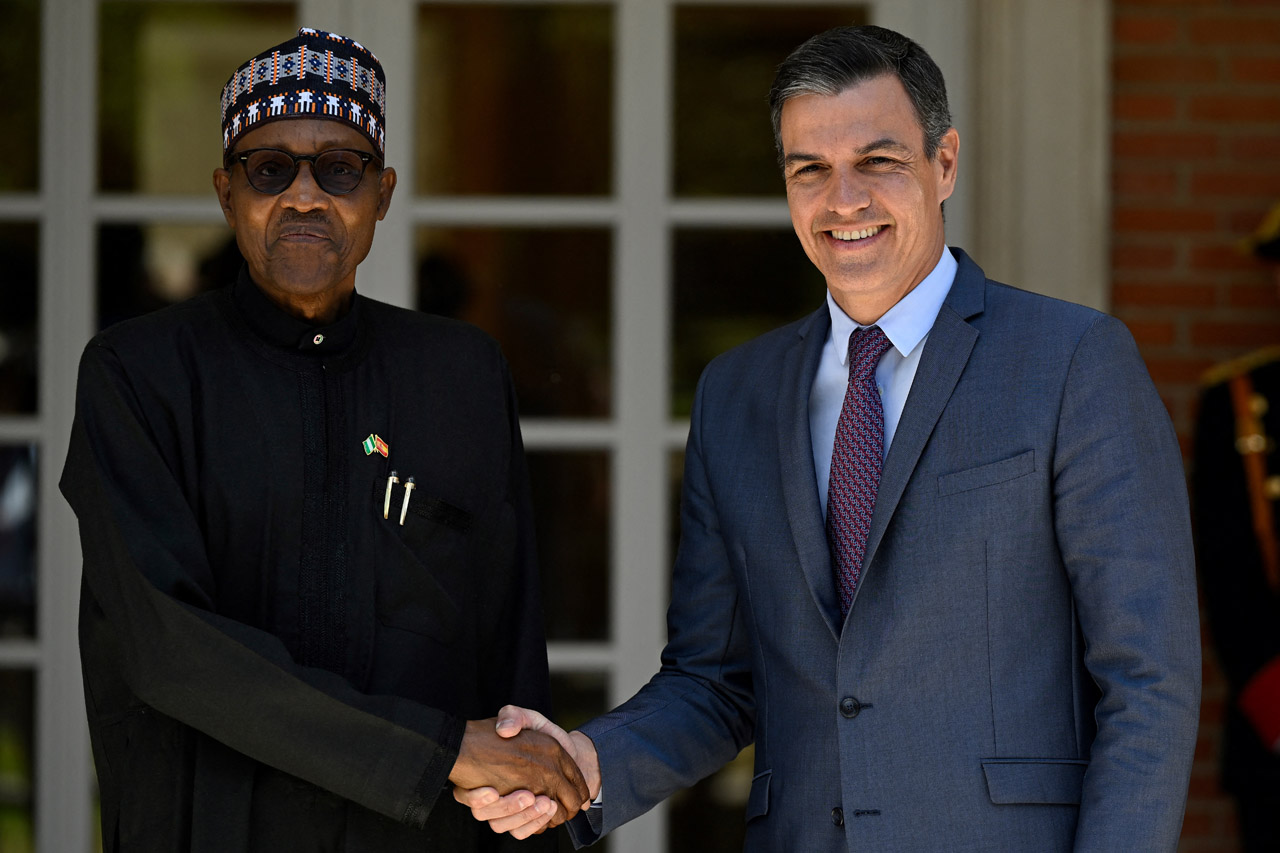 Buhari, only African leader invited for a state visit to Spain for 17 years | The Guardian Nigeria News

President Muhammadu Buhari, during the week under review, was on a state visit at the invitation of the Spanish President, Pedro Sanchez.

The Nigerian News Agency (NAN) reports that the Nigerian leader was also the special guest of the Head of State of the Spanish Nation, His Majesty King Felipe VI.

NAN reports that information available at the Nigerian Embassy in Spain indicates that President Buhari, who has officially visited Spain for the first time since his administration was established seven years ago, is the only leader to have received a state visit from the Spanish authorities in the last 17 years.

While in Madrid, Buhari met on Wednesday with President Pedro Sanchez as well as the Spanish monarch, His Majesty King Felipe VI.

During the meeting with President Sanchez, Nigeria and Spain signed nine agreements and memorandums of understanding covering a mutual legal assistance treaty in criminal matters and transfer of sentenced persons and extradition.

Others focused on economic and trade cooperation, tourism, sports, health, the fight against COVID-19, and science and innovation.

On Thursday, President Buhari attended a forum of political and business leaders, jointly organized by the Spanish Chamber of Commerce, the Ministry of Commerce and the Confederation of Employers.

During the meeting, the Nigerian leader alerted European countries to look to Africa for solutions to the resource supply challenges currently facing the global economy.

He also challenged Spanish investors to take advantage of Nigeria’s tax-exempt environment and unlimited quota of expatriates in the country’s free trade zones to boost Nigerian-Spanish trade and economic opportunities.

According to him, for several decades, Spain has been one of Nigeria’s most important trading partners.

Also on Thursday, President Buhari hosted representatives of the Nigerian community in Spain, including professional footballers and Spanish investors with interests in Nigeria.

He called on Nigerians pursuing legitimate business abroad to always invest wisely at home as part of their contributions to the transformation of the country’s economy.

The Diaspora team, which met the President, included John Bosco, President of the Association of Nigerians in Spain and his deputy, Richard Omoregbe.

Others were Kenneth Omeruo Super Eagles international who plies his trade with Leganes FC, Madrid and Obinna Okafor, a football agent.

Some others were Mohammed Bashir, an aviation student, Segun Adedoyin, a global affairs student, and Bright Omorodion, a businessman.

Buhari told the compatriots, whom he described as Nigeria’s ambassadors to Spain, that he had been briefed on their rule of law in the European country.

The Nigerian leader had earlier in the week, on May 29, attended the 16th Special Session of the African Union Assembly on Terrorism and Violent Extremism in Africa.

During the summit held in Malabo, Equatorial Guinea, Buhari endorsed the recommendation on the establishment of an African standby force against terrorism.

He also called on leaders to muster the political will that would fuel synergy, improve intelligence gathering and bring more urgency to the fight against violent crime.

On May 31, President Buhari met behind closed doors with members of the Progressive Governors Forum (PGF), at the presidential villa in Abuja.

During the meeting, the president instructed the governors to ensure that the upcoming convention to choose a presidential candidate reflects all the values ​​and virtues of the party.

Also on May 31, King Felipe and Queen Letizia of Spain sent their condolences to President Buhari for the recent tragedy in Port Harcourt, Rivers.

NAN reports that as many as 29 people were killed and others injured when a stampede broke out at a religious event in Port Harcourt.

Police said most of the victims were children.

President Buhari attended the 6th Extraordinary Session of the Conference of Heads of State on the political situation in Mali, Burkina Faso and Guinea on June 4 in Accra, Ghana.

During the meeting, Buhari called on ECOWAS leaders to review the report presented by former President Goodluck Jonathan, the ECOWAS mediator in Mali, on a transition timetable for the West African country. .

Buhari noted that Jonathan had recommended a transition period of 16 months’ along with his other personal calls and observations to give us military leaders in Mali up to 18 months to conduct elections, starting in March 2022.

The president concluded the week with a meeting with all APC presidential aspirants on Saturday night where he urged them to hold consultations and come up with a formidable candidate before the party holds its primary elections between the 6th and 8th. June.

The president said the meeting was a continuation of the ongoing consultative process aimed at ensuring a smooth and strategic emergence of a flag bearer.

According to him, such a candidate will lead the APC to a landslide victory in the next presidential elections.