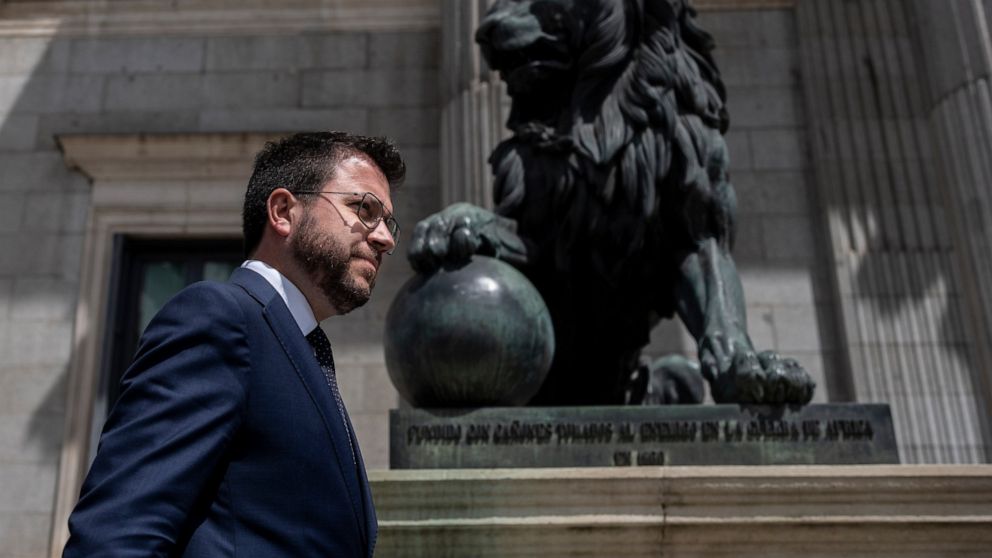 MADRID — The head of Catalonia’s regional government accuses Spain’s intelligence agency of carrying out what he calls “massive political espionage” on the independence movement in the northeast region and says relations with Spanish national authorities are “suspended” accordingly.

Pere Aragonès on Thursday shared examples of techniques used to infiltrate the phones of dozens of elected officials, activists, lawyers and other Catalans who he says led unequivocally to Spain’s National Intelligence Center, known as CNI in Spanish. . The left-wing leader said CNI has not yet denied buying controversial spyware from Israel’s NSO group.

The NSO program named Pegasus silently infiltrates phones to harvest their data and potentially turns them into spying devices on their owners. For its installation, the user usually has to follow a link in a targeted message, although a click is not required in all versions.

“We can be sure it’s CNI,” Aragones told foreign correspondents in Madrid. “Because the level of information used to infiltrate the phones suggests they had prior data on the targeted innocents that was not publicly known,” including the flight numbers who they were going to take.

“It’s massive political espionage which, from our point of view, has a political motivation,” he said.

Citizen Lab, a cybersecurity research group affiliated with the University of Toronto, revealed that at least 65 people, most directly linked to the Catalan separatist camp, were targeted with Pegasus or similar spyware sold only to agencies. government agencies to target criminals and terrorists. .

Almost all of the incidents took place between 2017 and 2020, when efforts to create an independent state in northeast Spain led to the country’s deepest political crisis in decades. The former Catalan cabinet that organized an illegal referendum on independence has been sacked. Most of its members were imprisoned before finally being pardoned. Half a dozen people fled the country.

The Spanish government has neither denied nor confirmed whether it uses Pegasus or other hard-to-detect spyware. Defense Minister Margarita Robles said Wednesday that laws protecting state secrets prevent the agency from releasing details about the activities of the country’s intelligence services.

“We cannot sow suspicion on an organization that cannot defend itself,” Robles told Spanish state broadcaster TVE, adding that CNI’s actions are under the control of judges.

Aragonès, whose device was among those infiltrated, according to Citizen Lab, said his left-wing party’s crucial support for the national left-wing coalition at the center of Socialist Prime Minister Pedro Sánchez and ongoing negotiations over the future from the wealthy Catalan region can only proceed if the Spanish government launches a full investigation and purges those responsible for the hack.

If the CNI-targeted espionage is confirmed, Aragonès said accountability within Sánchez’s administration “will be based on who knew, who authorized these actions or who did not.”

“And when I say accountability, I mean we’re going to need resignations,” he told The Associated Press.

A series of talks between the central government in Madrid and Catalan regional authorities resolved some of the separatists’ long-term grievances, but did not resolve fundamental issues of Catalonia’s status within Spain.

Polls and recent elections show that the percentage of Catalans who support independence has risen since the financial crisis of the past decade, but has since remained split, with majorities recently fluctuating between those for and against a break with the EU. Spain.