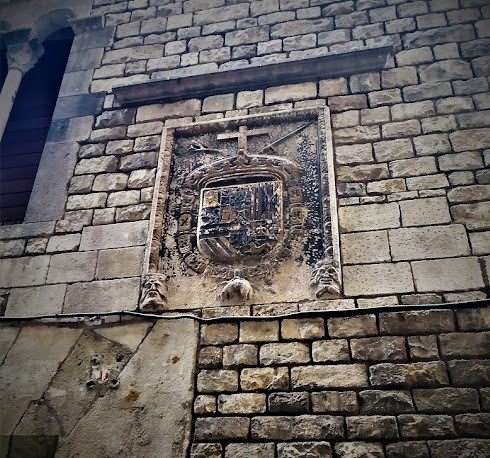 Coat of Arms of the Inquisition – Barcelona, ​​Spain

Plaça del Rei (meaning “King’s Square Square” in Catalan) is one of the most charming places in Barcelona. However, this iconic place hides a bloody past as it once housed the prisons of the Spanish Inquisition. Today, a stone coat of arms is still preserved.

In the Middle Ages, a number of important buildings were built here: the Royal Palace, the Chapel of Saint Àgata and the seven-story Tower of King Martí, the tallest in medieval Barcelona. In the former prisons of the Inquisition (outbuildings of the Royal Palace), on the facade corresponding to Carrer dels Comtes (current Frédéric Marès Museum), there is a coat of arms of the Tribunal of the Holy Office of the Inquisition. The badge features a cross, a sword and an olive branch (used as a symbol of justice). The chain of links is the symbol of the Order of the Golden Fleece, linked to the kings of Spain, since Tomás de Torquemada was appointed general inquisitor of the crown of Aragon in 1483, in the years of the dynastic union of the Catholic Monarchs.

The proximity to the prisons turned the square into one of the usual execution scenarios. As a scaffold, it was the site of the gruesome deaths of Catalonia’s most famous bandits. The Inquisition also organized its Auto de la Foi ceremonies by setting up a platform where the defendants climbed, ridiculously dressed in a tunic and a pointed hat decorated with drawings referring to the imposed guilt.

Next to the Sainte Àgata Chapel was the Casa del botxi (Executioner’s Home), a small house that has been transformed over time. The steps that went up to the facade and gave onto a door were replaced by an opaque glass window and the MHB logo, the space that houses the ruins of the Roman city of Barcino.

2022-02-03
Previous Post: Eurovision hopeful Chanel caught in a storm of controversy in Spain
Next Post: Spain to drop masks away as omicron surge slows