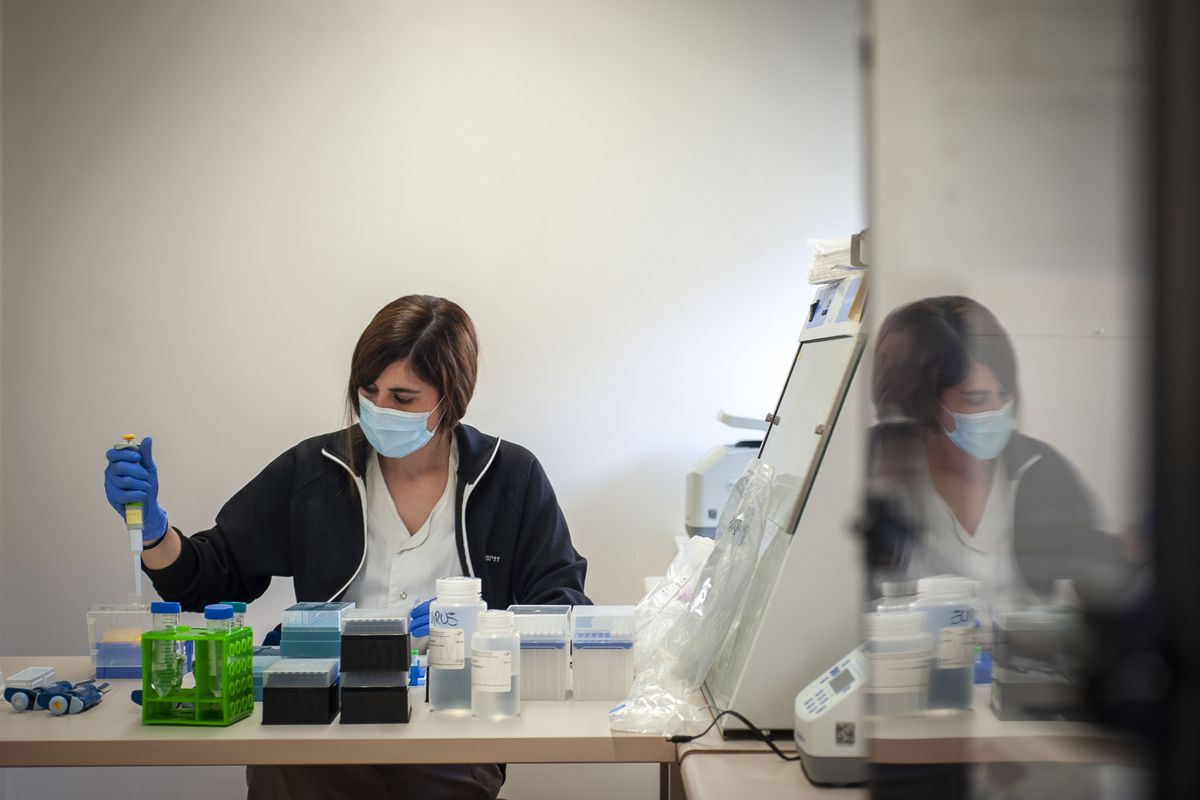 Covid-19 in Spain: In Spain, close contacts of people infected with the omicron variant will have to be quarantined | Society

The Spanish Ministry of Health has adapted the guidelines on the detection and control of the coronavirus to deal with the latest threat of the pandemic: the omicron variant. Two cases of the strain have so far been detected in Madrid, and the Balearic Islands on Wednesday confirmed a third case: a resident of Mallorca who arrived in Spain after traveling to South Africa.

In an effort to curb the spread of the variant, Spain’s Health Ministry on Wednesday updated its Strategy for Early detection, surveillance and control of Covid to include new rules for omicron. Under these measures, close contacts of a suspected or confirmed case of the omicron variant will need to be quarantined for 10 days even if they are fully vaccinated.

The document – which serves as an instruction manual for regions when a coronavirus case is detected – says close contacts who are fully immune do not have to self-isolate. However, the Ministry of Health yesterday added several exemptions: immunocompromised, close contacts of people infected with the virus by mink and close contacts of confirmed or suspected cases of coronavirus caused by the omicron, beta or gamma variants.

“Confirmation of this type of variant is generally not available at the time of diagnosis. This is why this measure should also be applied to suspected cases either because of preliminary information from a specific PCR test, or because the case is part of an epidemic that includes cases of these variants, “says the document. Some brands of PCR tests can signal different variants of the coronavirus, although genomic sequencing remains the gold standard for their identification.

The emergence of the omicron variant, first detected in South Africa a week ago, has alerted health authorities around the world. Scientific evidence for its potential danger is still very limited, but researchers have found that the strain contains more than 30 mutations. The World Health Organization (WHO) considers it to be a variant of concern, which means it may be more contagious, virulent, or able to escape the protection provided by Covid-19 vaccines or antibodies produced after the virus cure.

In order to contain the spread of the mutation, the European Union, the United States, Israel and Morocco, among other countries, have rushed to close their borders with southern Africa. But that measure has not contained the strain: at least 23 countries have so far detected cases of the omicron variant.

In Spain, a third case of the strain was detected on Wednesday in Mallorca in the Spanish Balearic Islands. The microbiology laboratory at Son Espases University Hospital in Palma confirmed, via a PCR test, the omicron variant in a woman who arrived in Spain from South Africa on Wednesday, after a stopover in Frankfurt, Germany, reports Lucia Bohórquez. The woman was traveling with her husband, who tested negative. Both, however, are in quarantine. The two cases confirmed in Madrid were also found in travelers from South Africa.

In Catalonia, two other suspected cases of the omicron variant have been detected at Barcelona’s El Prat airport, but have not yet been confirmed. Catalan health chief Josep Maria Argimon also told the Catalan parliament on Tuesday that his department may have detected the omicron variant in wastewater in Catalonia, reports Bernat Coll. The results are not yet final, however, and further analysis will be carried out over the next few days to confirm if this is the case.

In response to global concerns, Toni Trilla, head of epidemiology at Barcelona Clínic Hospital, called for calm. “The real concern for me right now is the delta variant, which is increasing and will likely continue to increase contagions, although severe cases will not increase in parallel with vaccination. If this new variant comes into the game, we’ll send the same message as with delta, ”he said. This message calls on the public to get vaccinated, wear face masks, avoid crowds and act “with caution.” “This is valid for the whole Greek alphabet [of coronavirus variants]”said Trilla, who added that it is” very unlikely that the vaccines will fail 100%. “” It is highly likely that omicron is the most common we have seen, but it is believed to be will replace the delta vaccines or escape, ”he explained.

Faced with the threat of the new variant, world leaders have chosen to boost vaccination against Covid-19, a process that is moving at different speeds: in Portugal, 81% of the population is fully vaccinated, while in Germany and in Bulgaria, this figure is only 68% and 25%, respectively. Indeed, the President of the European Commission, Ursula von der Leyen, on Wednesday opened the door to the introduction of compulsory vaccination in the EU. “I think it is understandable and appropriate to have this discussion now, how we can encourage and potentially think about compulsory vaccination in the EU,” she said. From December 13, Germany will also start immunizing children between the ages of five and 11, said acting German Health Minister Jens Spahn. It’s a week earlier than initially expected.

In Spain, almost 80% of the population is fully vaccinated, but there is still room for improvement. The regions, which are in charge of their health systems, the Covid-19 vaccination campaign and their coronavirus restrictions, hope that an increase in the number of vaccinations will help curb the continued increase in cases.

According to the latest figures from the Ministry of Health, released Wednesday evening, the 14-day incidence rate in Spain now stands at 217 cases per 100,000 – an increase of nearly nine points since Tuesday. Navarre continues to have the highest incidence rate, with 622 cases per 100,000. It is followed by the Basque Country, with 521 cases, and Aragon, with 403. This data point increased on Wednesday in all 17 regions of Spain, with the exception of Catalonia, where it has fallen by eight points. By age group, transmission rates are highest among the population under 12, which is not yet able to be vaccinated against Covid-19. In this age group, the incidence rate is 343 cases per 100,000.

The Ministry of Health on Wednesday reported 10,536 new cases and added 28 deaths to the official toll, which now stands at 88,080. Since the start of the pandemic, 5,174,720 coronavirus infections have been detected.

As cases increase, hospital admissions for Covid-19 have also increased. According to the latest figures, 3,957 Covid-19 patients are currently hospitalized, 110 more than Tuesday. This increase is also reflected in the Spanish intensive care units (ICU), where the occupancy rate increased by three decimal places to 8.07%. This means that eight out of 100 patients in intensive care have Covid-19.

The Madrid region announced on Wednesday a series of measures it will put in place before the Christmas season to contain the spread of the coronavirus. These include a free antigen test for each inhabitant, the reactivation of the self-appointment system for vaccinations, and a third dose of a Covid-19 vaccine for those over 60 years old. Speaking yesterday in explaining the plan, Regional Premier Isabel Díaz Ayuso of the Conservative People’s Party (PP) also said children between the ages of five and 11 would also be vaccinated, despite the fact that approval for such vaccinations has not yet been granted on a national basis. level by central health authorities.

Ayuso explained that antigen testing would be made available “so that in the event of social gatherings it can be done safely.” The regional government will buy four million of these tests, which will be available in pharmacies from December 15. The inhabitants of the region will only have to show their health card to receive a kit. The region implemented a similar program during the first months of the pandemic with face masks.

From December 2, people in the region between the ages of 60 and 69 will be able to get an appointment for a third dose of a Covid-19 vaccine. To do this, citizens can use the Tarjeta Sanitaria Virtual (Virtual Health Card) app on their mobile phone or through the regional health website.

Nationwide, more than 5.1 million people have already received a booster of a Covid-19 vaccine so far. The campaign is currently focusing on those over 70 for this vaccination, as well as vulnerable people and healthcare workers. In some regions, people over 60 are already eligible for clichés.

According to the latest data from the Ministry of Health, 79.3% of the entire Spanish population is fully vaccinated against Covid-19. Concerning the target population – that is to say those over 12 years old, since vaccines have not yet been authorized under this age group – 89.3% have been fully vaccinated.

Also in the Madrid region, four members of the same family not vaccinated against Covid-19 were reported by the regional television channel Telemadrid and confirmed by the EFE news agency as being in the intensive care unit (ICU ) of the Severo Ochoa hospital in the southwest of Madrid. city ​​of Leganés. Family members are between the ages of 40 and 70 and were “sedated and intubated” Wednesday due to the severity of their infections.

A fifth family member was also hospitalized, but was in normal ward yesterday. Sources at the hospital said the 70-year-old grandmother may need to be taken to intensive care, however, due to her associated conditions.

The hospital insisted on the need for a Covid-19 vaccination, given that 57% of infections and 51% of hospitalizations since the start of the fifth wave in mid-June were unvaccinated patients, according to the last epidemiological assessment of the regional health department.

Over the past week, there have been 23 outbreaks in the Madrid region with 94 associated cases, the majority of which were due to meetings or celebrations in private homes.