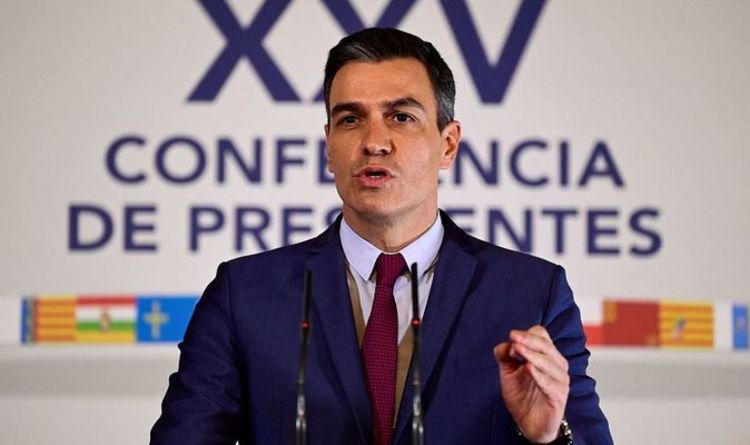 The wave that infected large numbers of people in a short time is considered “brutal but rapid” by top epidemiologists who closely monitor the movement of the infection. Oscar Zurriaga, vice-president of the Spanish Society of Epidemiology, told ABC: “We all expect this surge to be brutal but fast.”

The top health expert predicts that the “height” of the curve of people infected will be much higher than so far, but with a short peak and a lower rate of admissions for each infection.

However, hospital and intensive care occupancies will not drop as quickly as new cases are expected to.

On Monday, the cumulative incidence reached 1,206 cases per 100,000 population for the first time in the entire pandemic, after adding more than 214,000 new cases since Thursday.

A year after the start of the vaccination campaign, the President of the Government, Pedro Sánchez, admitted that in the “coming weeks” we will see a “high” number of infections, and most regions expect the curve epidemic will be at high levels at least until mid-January.

Data shows that since last Thursday, people admitted to the ward have increased by one percentage point, occupying 7.69% of hospital beds, while in intensive care the increase is two points, bringing the figure at 18.26% occupancy.

Julián Domínguez, spokesperson for the Spanish Society of Preventive Medicine, Public Health and Health Management (SEMPSPGS) said that the problems generated by this wave will be different from those of previous waves.

The lethality of the disease and the severity of those infected have “decreased a lot”, she said.

The number of critically ill patients, which previously accounted for 0.7% of those infected, now stands at 0.2%.

READ MORE:Russia ready to turn ‘everyone to radioactive ash’

The difficulty, says Domínguez, is that today, with an ultra-contagious variant and skyrocketing infections, there are strategies like mandatory ten-day quarantine for all positive cases who have no sense.

In fact, the expert is in favor of reducing the quarantine of positive cases, currently set at 10 days, to between seven and eight days, in particular for those infected without symptoms or if these last only a few days, because studies suggest that with these margins they will no longer be contagious.

A decision that England has already taken, reducing it to a week in the face of an unprecedented number of infected people which led the country to a “de facto” confinement, paralyzing life and generating problems to fill the positions of isolated workers since ten years. days because they had been infected.

Virologist Adolfo Garcia-Sastre, head of emerging pathogens at Mount Sinai Hospital in New York, said: “The main issue is going to be the number of infections.”

DO NOT MISS :
Test and Trace text incorrectly instructs infected people to self-isolate for 10
Live Brexit: boom! Sefcovic warns Truss of ‘collapse’ of hated deal
A new confinement “would be devastating” for the mental health of children…

Data compiled by the Spanish Society of Immunology suggests that the Wuhan strain had a transmissibility index of between 2.5 and 3 points; it increased to 6 with the Delta variant and now early data from Omicron suggests it is up to 10.

Mr Sastre said: “It is easy for many healthcare workers to become infected with Omicron.

“They will have to quarantine themselves, and if we lose health workers, the pressure on the health system will be greater.”

Meanwhile, health authorities in Madrid believe the peak of the sixth wave of infections will arrive next week.

Although infections are increasing exponentially, their translation into hospitalizations has nothing to do with previous waves.