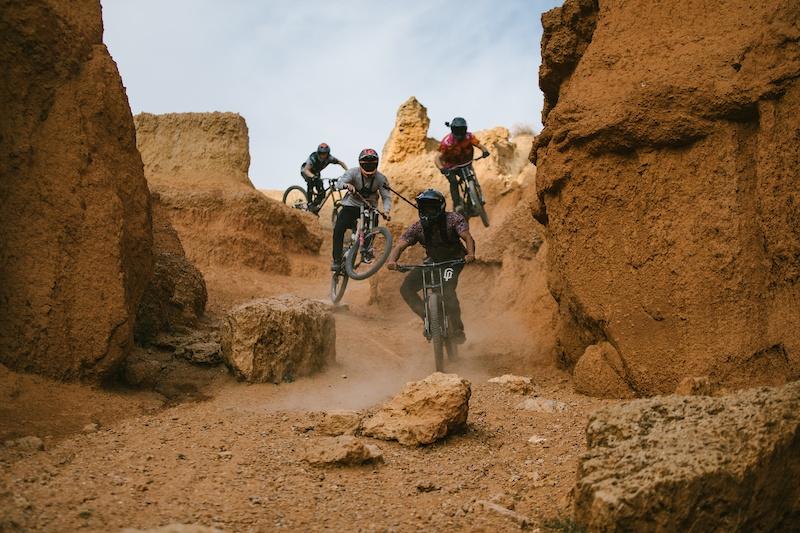 CPGANG is doing a freeride road trip in Spain

With vivid images of Red Bull Rampage still in our minds, Nick Pescetto, Jonny Livorti and I (Luis Biscaldi) decided to go on a road trip to Spain in search of a true Freeride adventure.

The first stop would be Teruel, as suggested by local biker and friend Alvaro Penades who had spotted the potential of this region on previous horseback missions.

Teruel is the smallest provincial capital in Spain, with just 35,000 inhabitants. The landscape surrounding the city is very unique, something that comes out of a western. It also reminded us a lot of some of Utah’s iconic landscapes, on a much smaller scale. 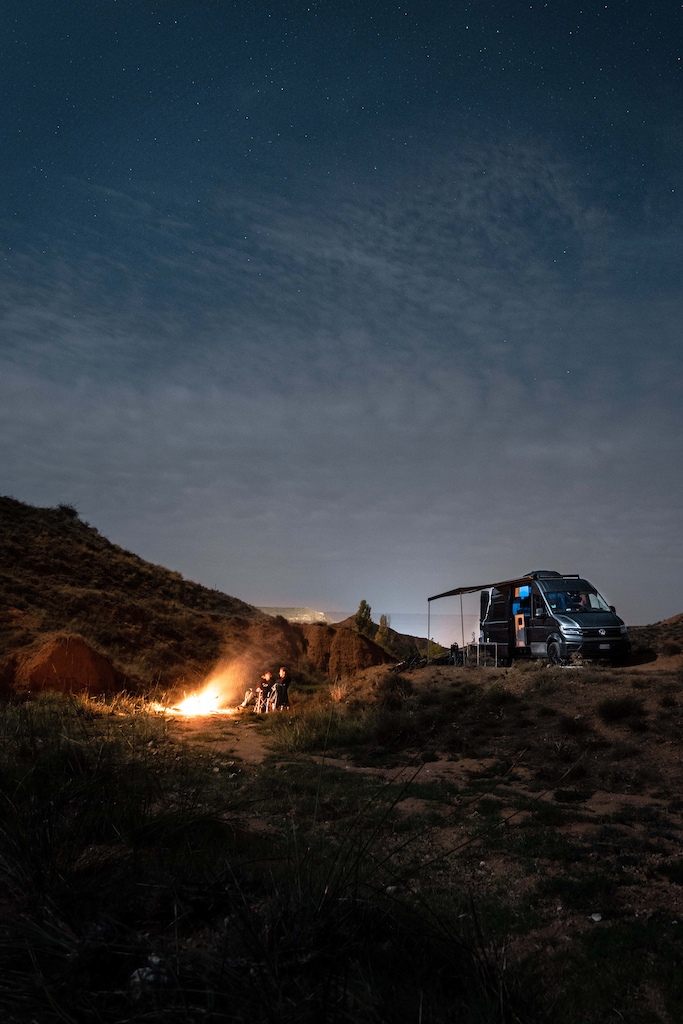 Arriving at night at the exact GPS location provided by Alvaro meant we had a big surprise the next morning. Have we just woken up in a Freeride paradise ?!

DAY 1.
We spent the first morning walking around the area to get a feel for the terrain, dirt, slope and extent of it. Contrary to what it seemed at first, the dirt was just about great for building lips and shaping landings. A slightly harder crust of earth and stones covered a more sandy but adherent layer of earth below. We couldn’t have been happier to have brought tools with us!

The warm-up line for the day was previously ridden by Alvaro. He called it the “red line” because it was an intermediate line between a more difficult (or more sketchy, as he kept saying) and easier line near our campsite. We hiked the line and hiked it a few times.

All along, we felt like we were in a big Freeride playground, to have all the room for us with no one to see on the horizon.

At sunset we all got back up and Nick decided to fly the drone to end the first day in the desert!

DAY 2.
We spent the morning digging a little hole in the canyon that Nick spotted on the first morning. We weren’t sure if this was going to work or not, but we were motivated to take advantage of the very deep ravine under space which offered creative photo opportunities!

Hector Saura (founder of Bicycle Nightmares) and local MX rider Carlos Dìaz both came to help dig! The wild sage bushes were no challenge and after a morning digging we watered the freshly built takeoff and were ready to hit it.

Alvaro Penades, super motivated as always, was the first to go for it. Worked perfectly, now the session has started! 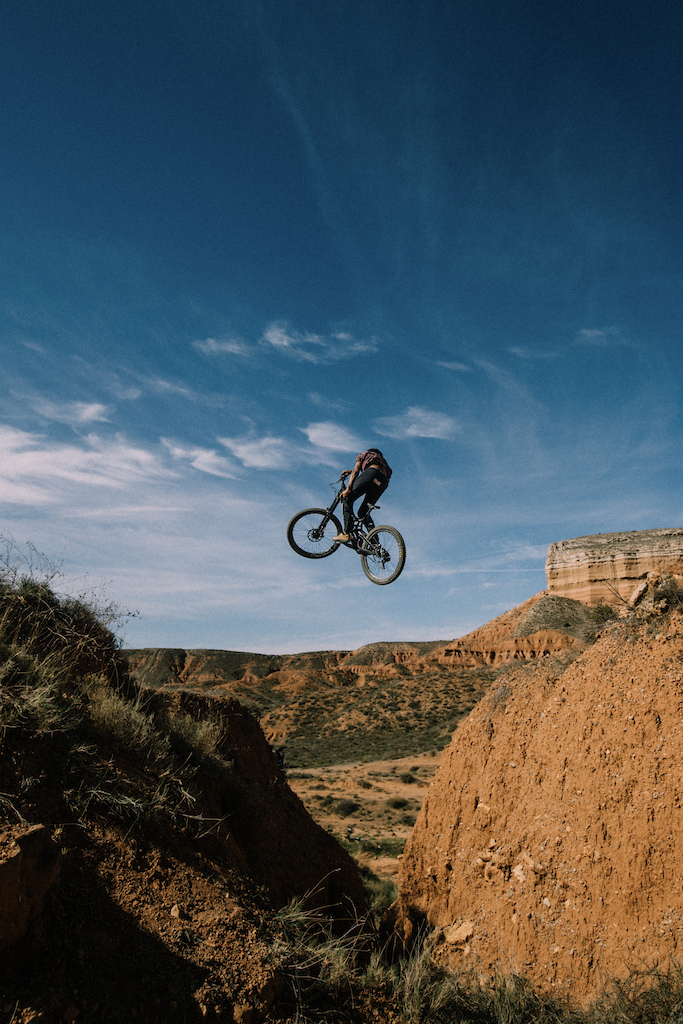 Nick and Luis in flight over the canyon. 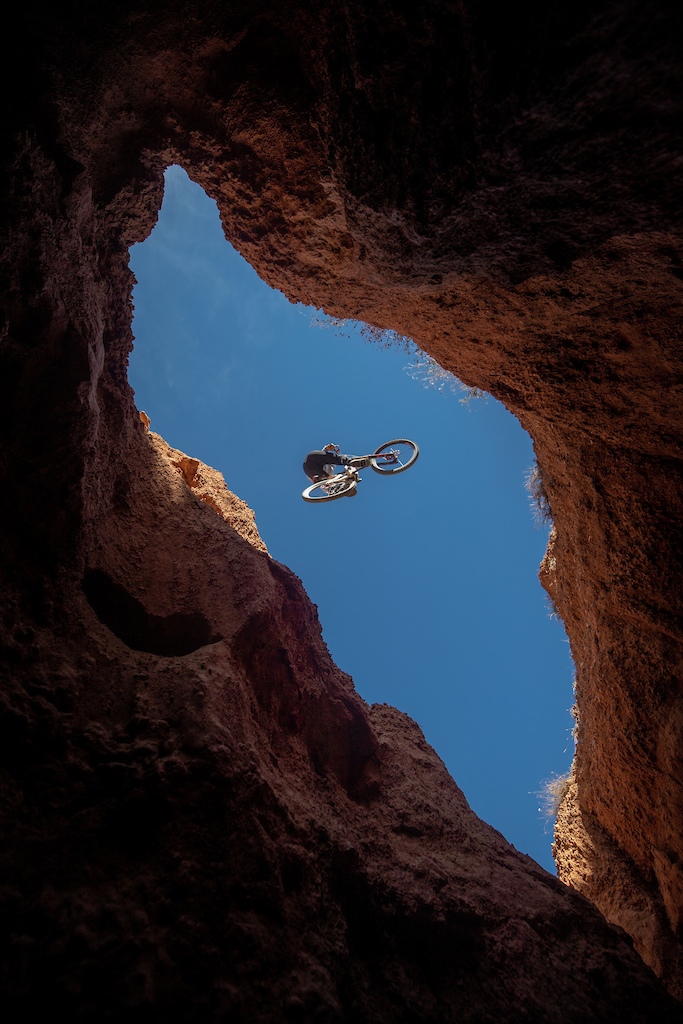 We made the jump until it was dark and as soon as we got back to our campsite we spotted a bright spot behind a ridge in the distance. A full moon was rising !! Nick immediately grabbed his camera gear and we rushed over to a ridge to try our luck on some lunar shots. Nick had wanted to ride bikes and a full moon for a while and the opportunity turned out to be perfect, if completely improvised. Luck favors the brave! 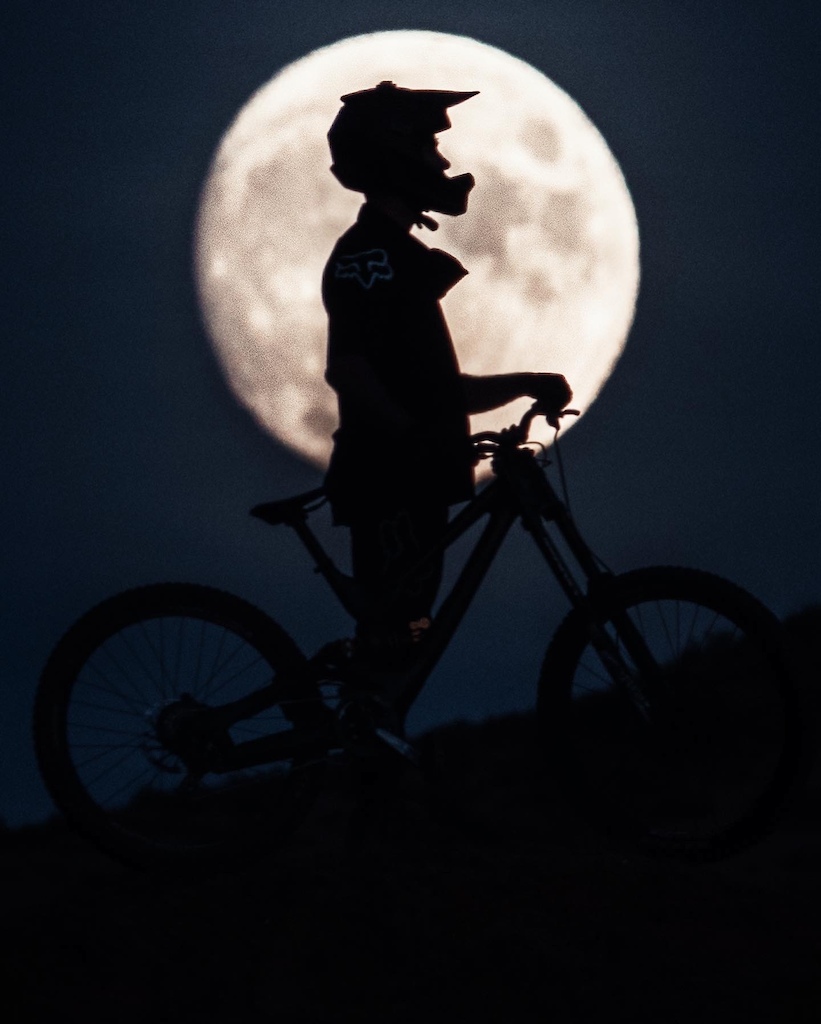 Alvaro brings back great memories of the full moon 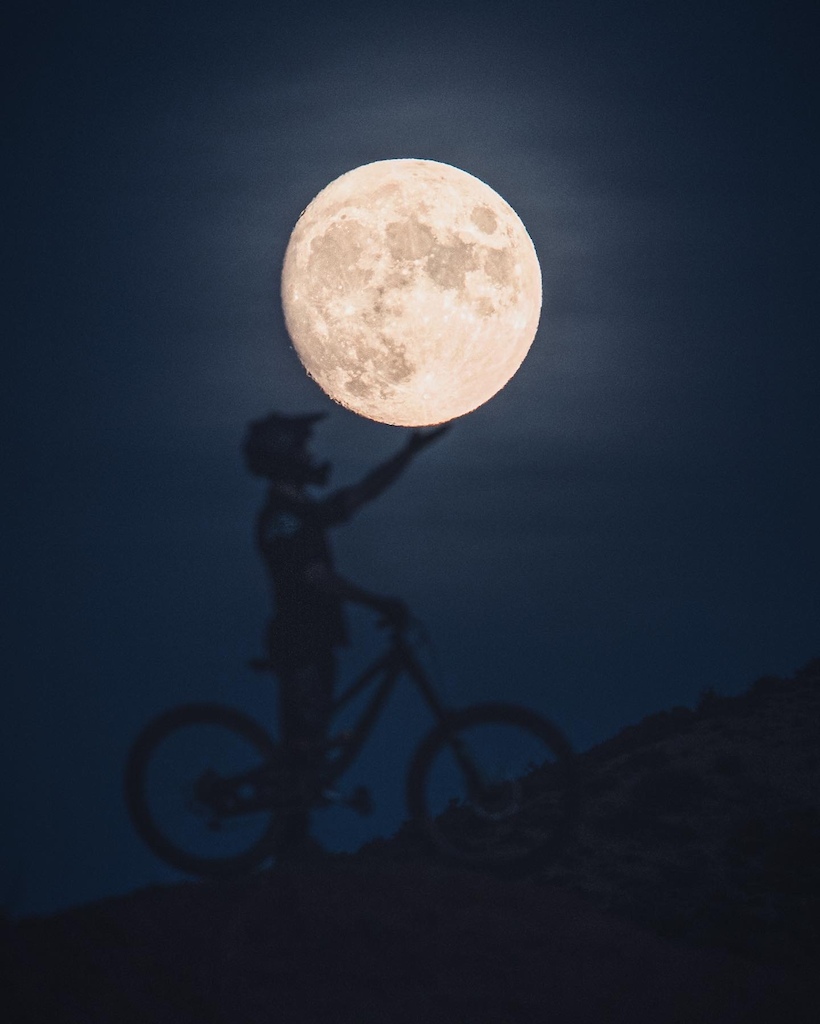 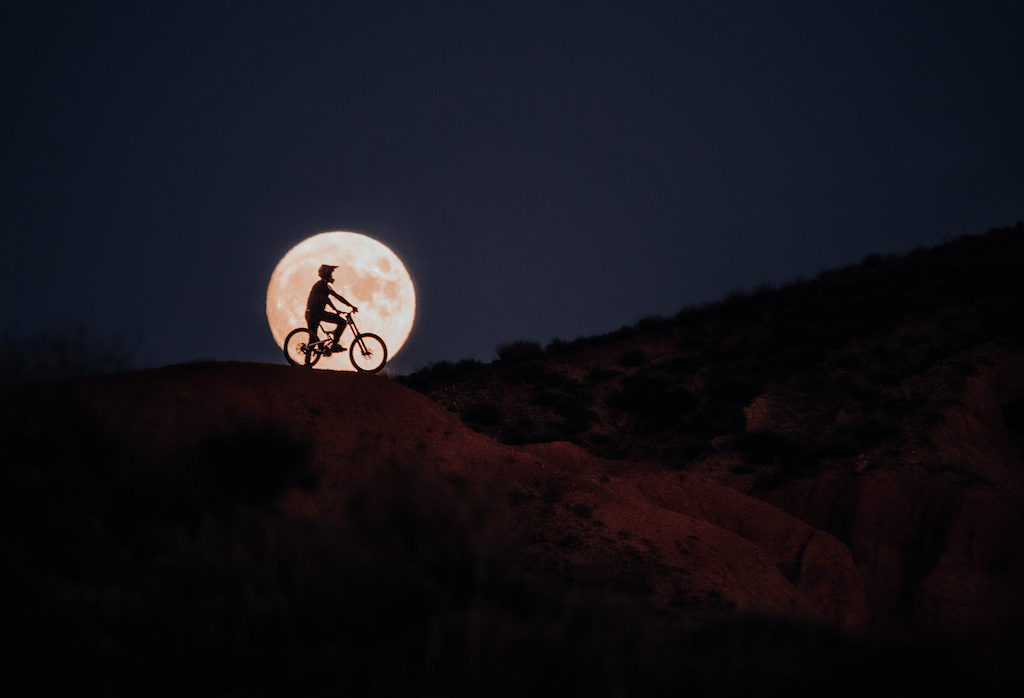 DAY 3.
After two days of camping in the same location, we moved to a new location which Alvaro described as “perfect for a few Partyride tours”. We packed all of our gear and drove 15 minutes before parking by the side of the road on top of a hill. After a quick pedaling over the ridge of a stunning canyon, we arrived at the most scenic spot of our trip to date. 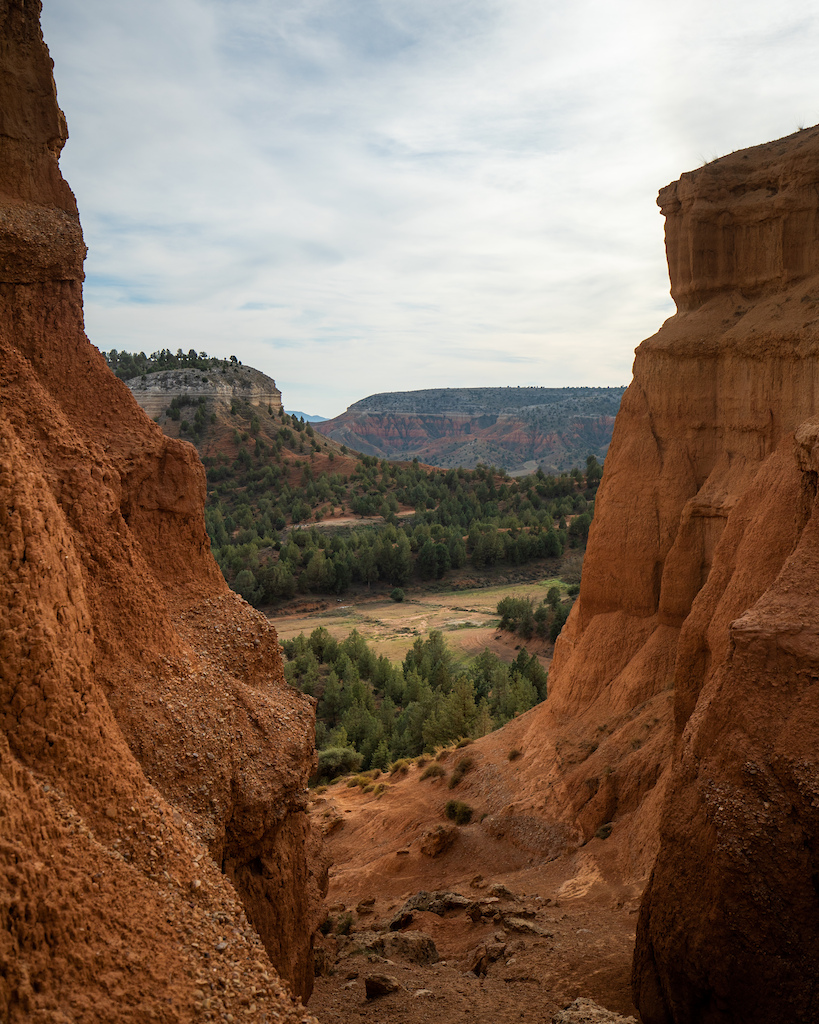 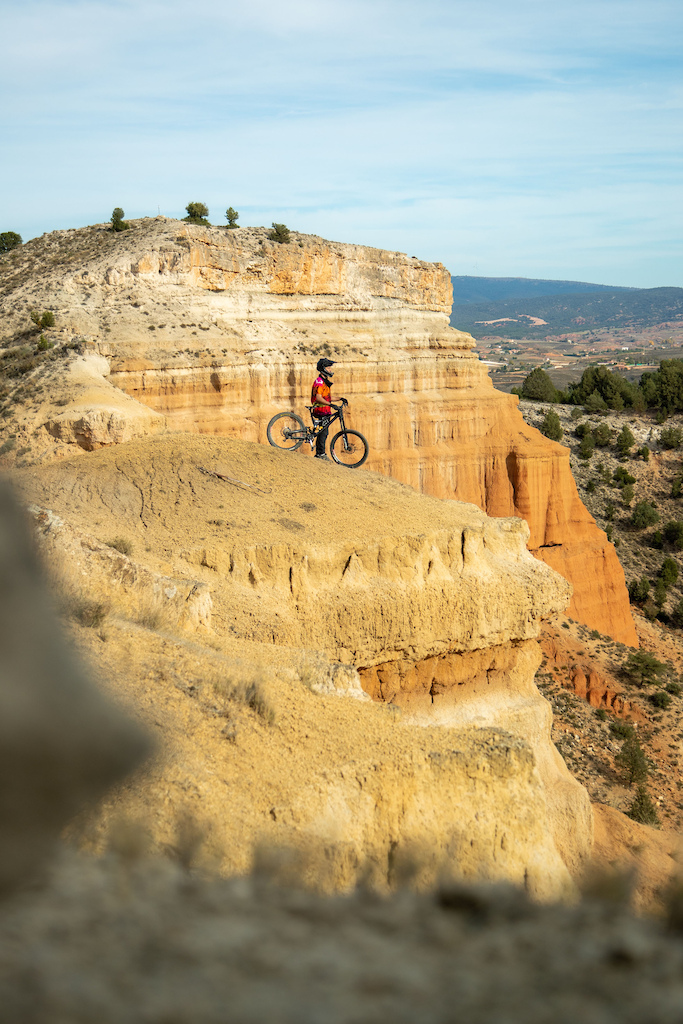 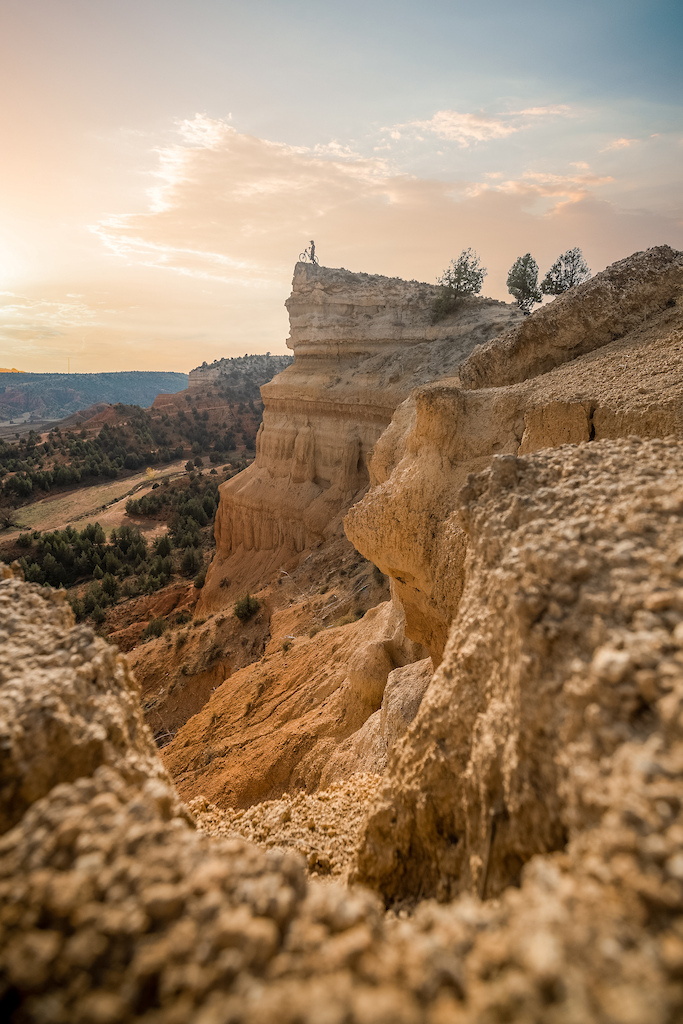 A whole valley opened up before our eyes and we could see a ravine falling at one end (reminded me of something you could ski down, except it was covered in red earth). We approached the line which turned out to be much wider and a bit flatter than it looked from a distance. We have decided to fall all together!
The Partyride Line was the grand finale these days in the desert! The energy was at its peak as we loaded the van to the next destination: Bikepark Fenasosa.

Day 4.
La Fenasosa is no ordinary bikepark. Located in Serra Mariola National Park, it’s a private estate that offers world-class trails, amazing people, and all the airtime you could possibly want. La Fenasosa has been a popular destination for cyclists around the world for the past decade, now with further improvements to its trails it has become a must-see bikepark for many years to come.

In the morning we were joined by local rider Gustavo Alcojor and Barcelona driver Bienvenido Aguado. Both knew the park well and their enthusiasm contributed to a breathtaking day at La Fenasosa. 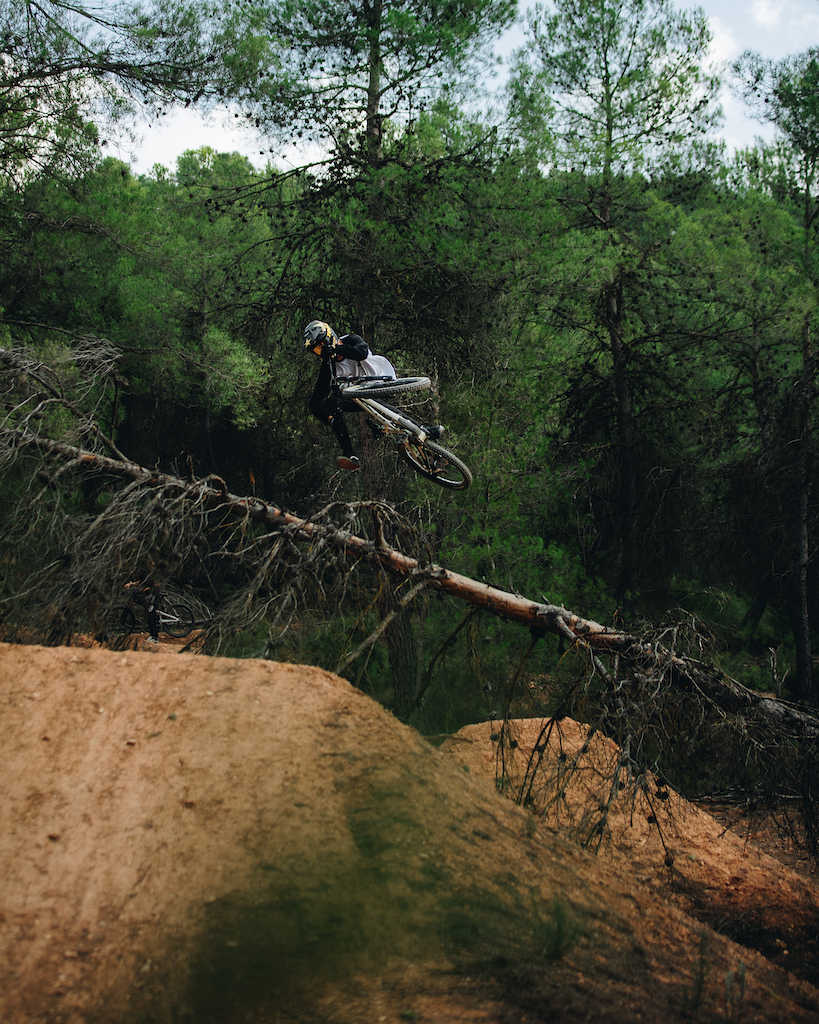 Gustavo shows us how to do it. Jonny Livorti © 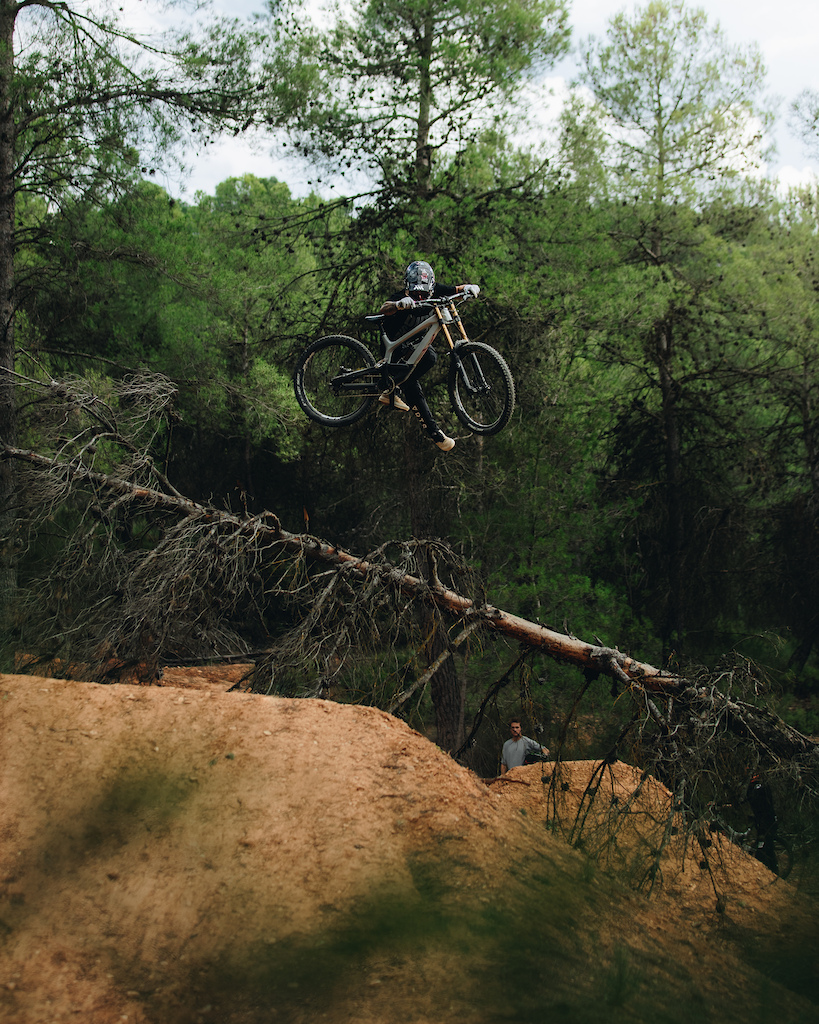 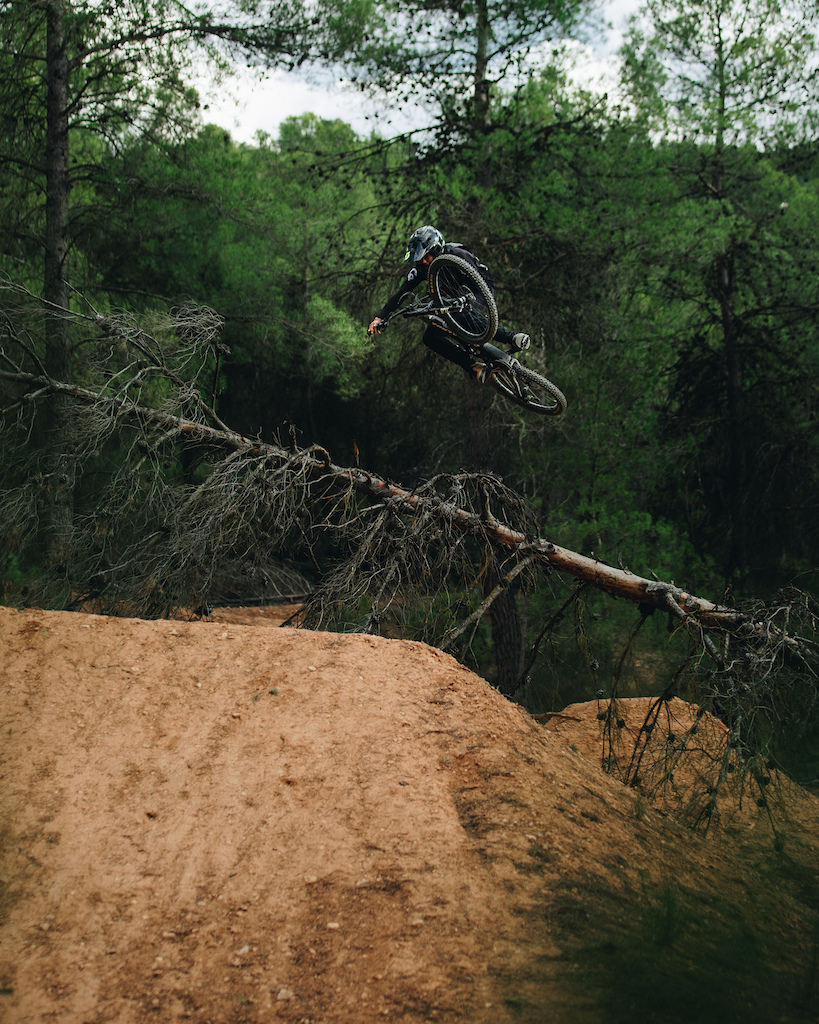 Nick Pescetto lays it flat on the dead pine tree. 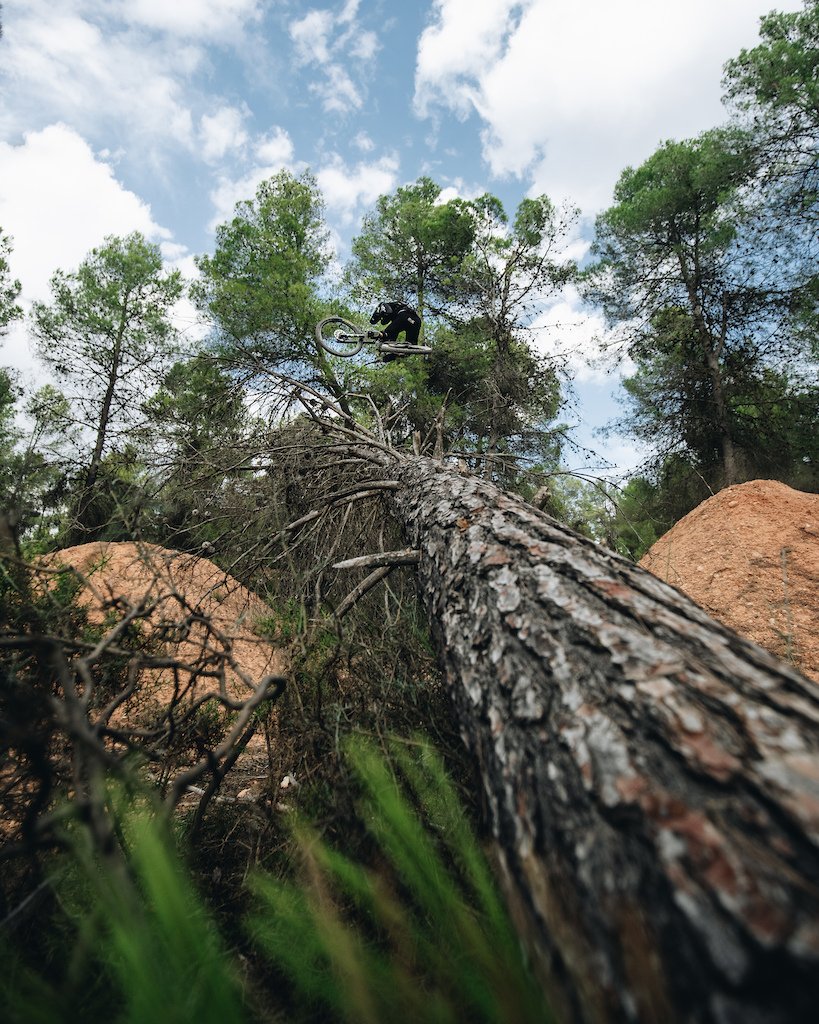 The “tree jump” pictured above is one of Nico Vink’s many creations. Perhaps most impressive was the “Foxy Line”, something out of a video game. The line is quite long and sometimes demanding (depending on how fast you want to haul) but the last section is guaranteed to delight you. A long series of large table tops, supercross style, with room for different lines on each return! To enjoy with your riding buddies !!

DAY 5
We woke up to an unexpected rain in La Fenasosa. After a slow morning we opted for a 5 hour drive to a place we had never been before: 4Riders Bikepark.
Located in Berga (about 1h20 north of Barcelona), this is a private bikepark that has become a popular destination for the Barcelona equestrian community. 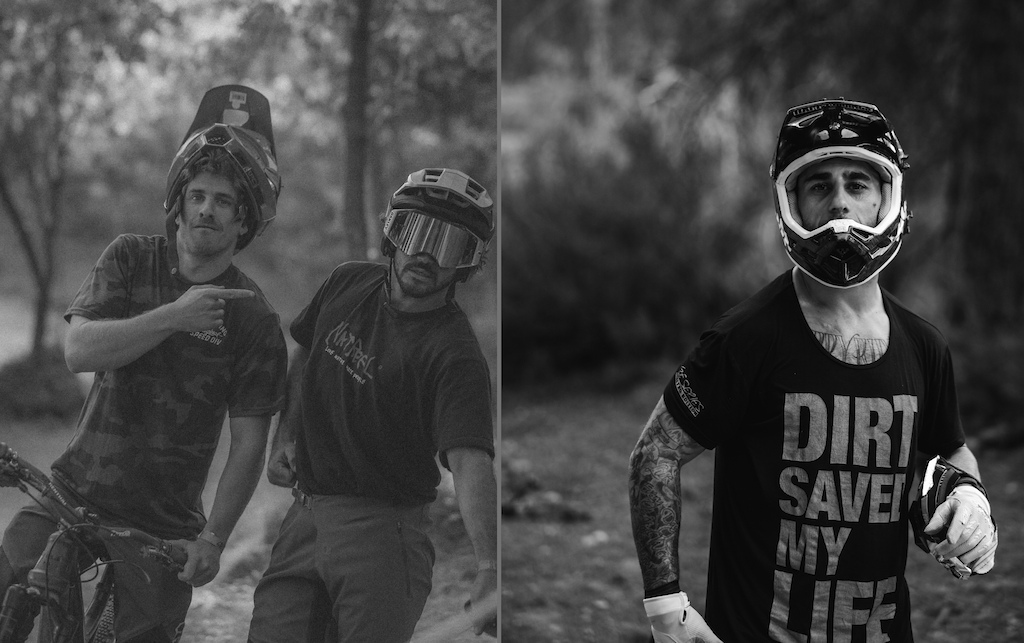 The next day, Bienvenido Aguado and Barcelona’s Sergi “Topo” Valenzuela and Jose “Tibu” Sanchez joined us. After a few laps we realized we were in the right place for some airtime! No wonder so many talents are coming out of this field. 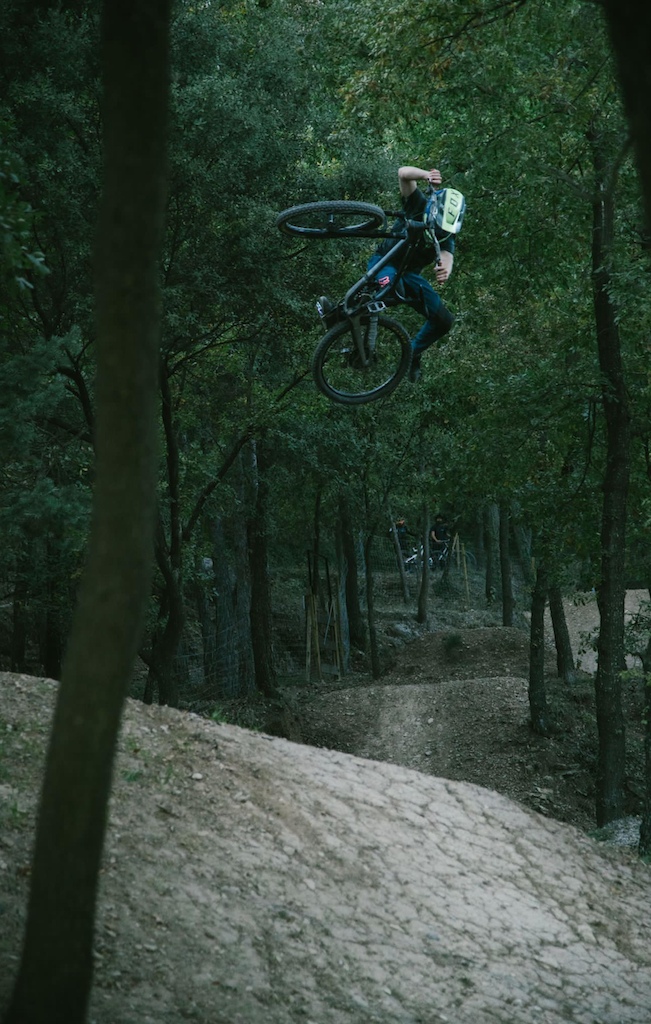 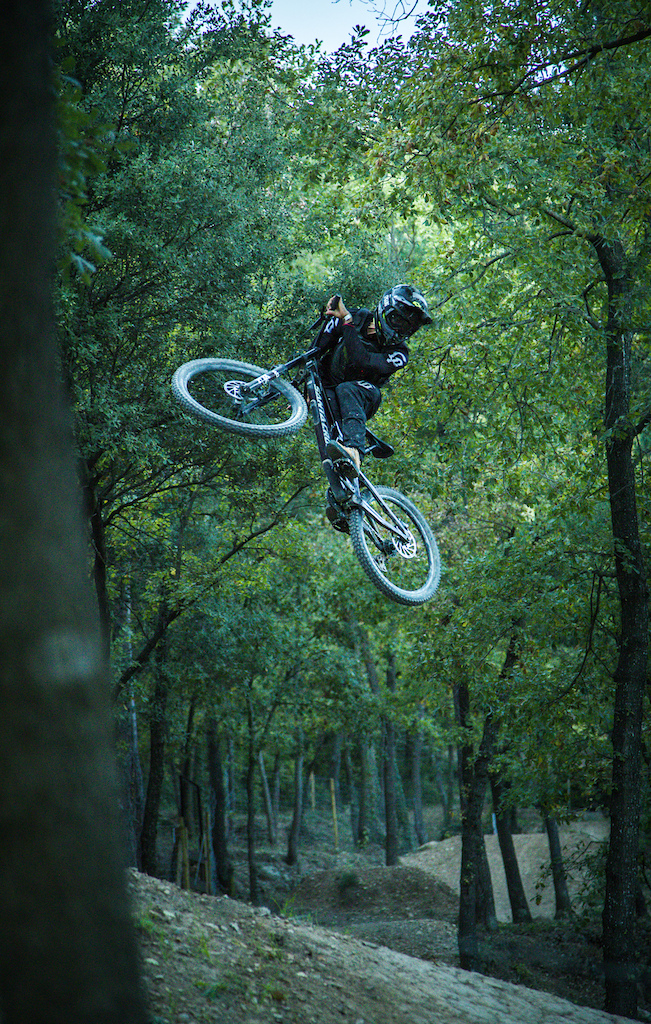 Thanks for reading!! We hope this article can inspire you to go on a horse riding trip soon with your best friends !!
Until next time.