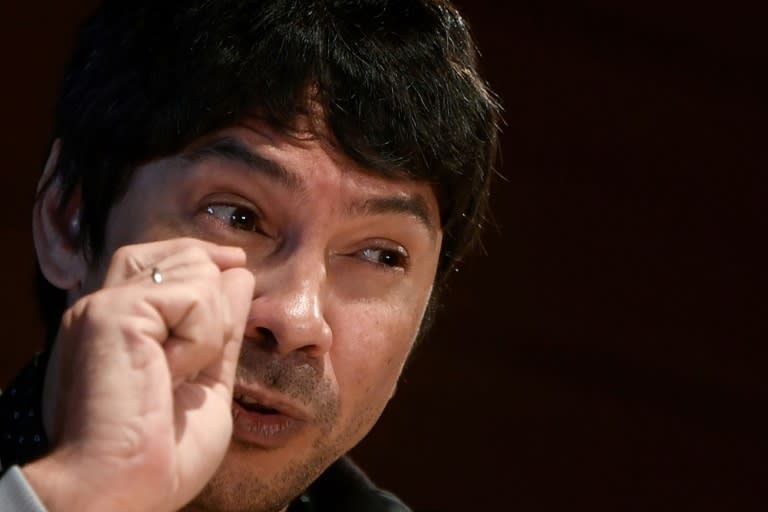 Cuban dissident says flight to Spain a “blow” to opposition

The leader of the Cuban protest, Yunior Garcia, admitted Thursday that his flight to Spain following pressure from the authorities on the island was a “painful blow” for the opposition movement.

Garcia, who unexpectedly arrived in Madrid on Wednesday with his activist wife Dayana Prieto on a tourist visa, added that he had no plans to seek asylum in Spain and had left Cuba because he risked a “living death”.

The 39-year-old actor and playwright is the founder of the Archipelago online discussion group which on Monday called for protests in Cuba that were blocked by the Cuban government.

“I understand that it was a painful blow,” he said at a press conference in Madrid, when asked about the disappointment expressed by other Cuban dissidents at his abrupt departure.

“I will eventually forgive myself, maybe not having had the courage to turn myself to stone or become a bronze statue,” he added.

“Maybe I beg forgiveness for being human, for thinking of my wife and my life, and for escaping what was sure to be a living death, because that’s what awaited me at Cuba.”

Garcia has been the target of a relentless weeks-long campaign to discredit him in Cuban state media and pro-government blogs after Archipelago informed authorities of the planned march.

He attempted to walk on his own on Sunday, but was prevented from leaving his apartment after police and government supporters surrounded the building.

When he tried to communicate with reporters and others by displaying a white rose on his window, people standing on the roof unfurled a huge Cuban flag to cover the window.

Garcia told a press conference in Madrid that her whole family had been “harassed” by the regime and its supporters, his wife said she would lose her teaching job and two decapitated pigeons were left in front of her. House.

“It was something orchestrated by the state security forces” to scare us, he said, adding that he was considering returning to Cuba with his wife once their lives were finished. there would be more “in danger”.

“I’m sure the regime’s strategy was to keep me locked in my home… totally silenced… the only thing I have is my voice and I couldn’t stay silent. Someone. must tell what’s going on in Cuba. “

In an interview with Onda Cero radio, Spain’s presidential minister Felix Bolanos said Madrid had helped Garcia “with documents” to facilitate his trip to Spain, without giving further details.

“What we did was a way to help ensure that this person wouldn’t have a hard time (in Cuba),” he said.

Born in the eastern town of Holguin, Garcia has long been known only in the arts world – for his plays, as well as his television and film scripts.

But since November 27, 2020, when hundreds of artists demanded more freedom of expression during a demonstration in Havana, he has taken on another role: one of the faces of a new generation critical of the government. .

Cuban authorities have accused Garcia, without providing any evidence, of being paid by the United States as part of a plot to destabilize the country, a charge he denies.

2021-11-18
Previous Post: Rohlik Group online grocery store to expand to Italy, Romania and Spain next year
Next Post: Cuban dissident, now in Spain, says fight will continue without him