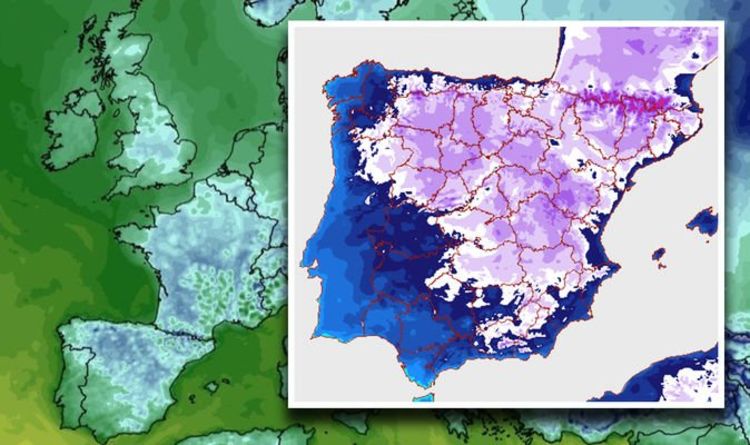 Regions across Europe have experienced severe storms, with heavy snowfall, high winds and flooding. Spain’s AEMET has issued a series of warnings for the country with forecasts of falling nighttime temperatures.

Across Spain there are alerts for “low temperatures” as the mercury is expected to dip to -9°C in some areas.

Some areas could also experience dramatic temperature drops of up to 18°C.

AEMET warns that parts of eastern Andalusia, southern Murcia and most of the interior of Valencia and Castellon could see the mercury drop from 18C to freezing in just 24 hours.

Forecasters say this severe cold is expected to last through Monday.

In contrast, southern Spain will experience mild conditions by Sunday.

In Murcia, southern Alicante and Cadiz, the mercury is expected to reach 17°C on Sunday.

For those in Malaga, Ibiza and Denia, during the day conditions will persist around 15C to 16C.

Spain is not the only European country to have faced freezing conditions, as a storm left Greece struggling with heavy snowfall and flooding.

The storm brought heavy snowfall to parts of Greece, with the mountainous region of Thessaly seeing more than a foot of snow and Athens also seeing downpours.

Temperatures dropped to 1°C in northern Greece, with highs of just 10°C elsewhere.

2022-01-15
Previous Post: Which banks in Spain do not charge commission?
Next Post: Horses jump over bonfires as Spain’s smudge ceremony returns after pandemic hiatus