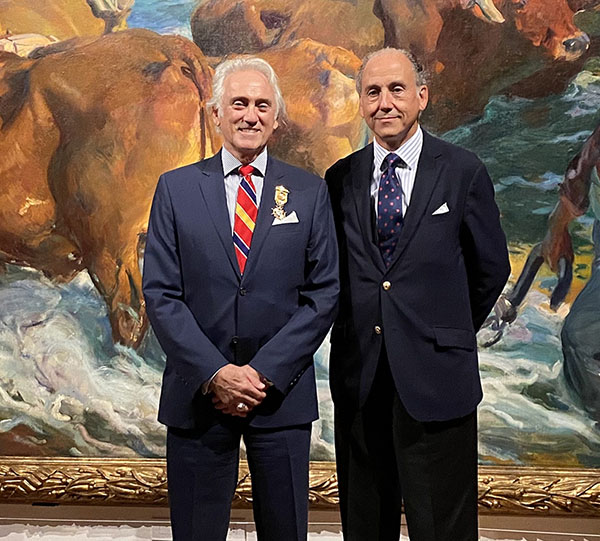 Dr David Samore of Wellington honored by the King of Spain

Wellington resident Dr David Samore was recently honored by King Felipe VI of Spain in a special ceremony at the Norton Museum of Art. Samore, a career educator with Palm Beach County Schools, was awarded the Officer’s Cross of the Order of Isabel la Católica, an honor bestowed on individuals who have distinguished themselves in the eyes of the Spanish government. For more than 200 years, the Spanish Crown has conferred La Orden de Isabel la Católica on selected people in recognition of the rapprochement of cultures and languages. It is open to Spaniards and non-Spaniards.

This honor is primarily due to Samore’s dedication to bilingual immersion education and international Spanish academies, such as New Horizons Primary School in Wellington. ISAs are a family of 128 bilingual schools in the United States and Canada, which work in conjunction with the Spanish Ministry of Education. The Consul General of Spain, Dr Jaime Lacadena e Higuera, awarded the recognition, highlighting Samore’s decades-long work to expand cultural understanding and create opportunities to connect Spain and the Spanish language with Florida.

Samore was principal of Okeeheelee Middle School for 18 years, during which time the school was twice chosen as the School of the Year by the Embassy of Spain. Samore’s distinguished career includes the initiation of the International Baccalaureate in Palm Beach County and the opening of the Bak Middle School of the Arts.

The event took place on October 28 at the Norton Museum of Art under the chairmanship of CEO, Dr Ghislain d’Humières, and Chairman of the Board, Bruce Gendelman. Superintendent Michael Burke was also in attendance, along with Palm Beach County School Board members Frank Barbieri, Marcia Andrews and Alexandria Ayala.

2021-11-19
Previous Post: Cuban dissident, now in Spain, says fight will continue without him
Next Post: News from Spain: Economy at Civil War Level with More Debt Than EVER | World | New