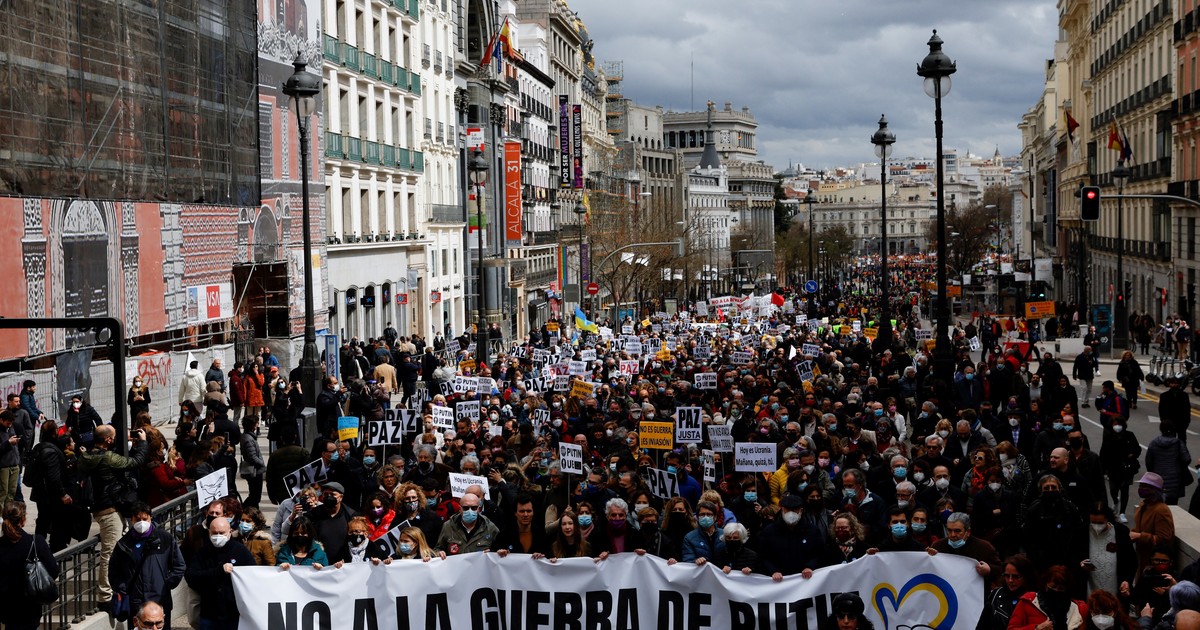 Due to the war in Ukraine, Spain faces agricultural shortages, strikes and protests in Madrid

“I exchange cows for gasolio”, says the poster that a tractor has been traveling through Spain for days to show the discontent and despair of the rural world: feeling suffocated by the increase in fuels, electricity and the production costs that the invasion of Ukraine is making felt on Spanish soil.

Madrid has become this Sunday the echo of the claim of farmers and winners who have arrived with tractors, horses and animals to take part in a demonstration that, according to the agrarian organizations that called it, attended by around 400,000 people. For the estimates of the Government Delegation, however, they were one hundred thousand.

whole morning, the six central lanes of the Paseo de la Castellanathe avenue which at the beginning of the 20th century was a symbol of the progress of the capital, was conquered by farmers, herders, hunters and fishermen who shouted their request for help in the face of the increase in energy and raw materials.

Spain is experiencing the highest inflation in the last 36 years: 7.6 percent.

Against Putin in Madrid. Photo Reuters

In February, the consumer price index (CPI) rose 0.8% from January, leading to a 1.5 point rise in the year-on-year rate.

The fuel price crisis transport is paralyzed which has not traveled the roads of Spain for a week and threatens the dreaded shortage of supplies.

In some supermarkets in Madrid’s Chamberí neighborhood this weekend there was already a shortage of long-life milk, sunflower and olive oil, rice and toilet paper.

Spain imports from Ukraine 22 percent corn and 68 percent of the sunflower consumed by Spaniards.

In order to minimize the impact of a possible shortage, the Spanish Ministry of Agriculture, Fisheries and Food has temporarily relaxed the conditions for importing maize from Argentina.

Even the exclusive Gourmet Experience of El Corte Inglés de Castellana is affected by the shortage: “We ran out of oysters”, admitted on Saturday night Ana, the room manager.

“We cannot have a green Community agrarian policy in the red. We need profitability on our farms, for our farmers and our ranchers. So here we are, ’cause we ain’t gonna move“, said Angel Villafranca, president of the Spanish agri-food cooperatives.

Fertilizers are paid 48% more and plastics used for greenhouse crops cost almost twice as much as in 2021.

“There are no excuses. We arrived in Madrid peacefully. Today is the beginning of the search for solutions for so many families, for so much of the rural world and for this 80% of the territory that we occupy. Already enough. Let the President of the Government stop traveling and start acting,” asked Pedro Barato, president of the Agrarian Association of Young Farmers (ASAJA).

Agrarian organizations also denounce that diesel fuel for tractors has increased by 73% and electricity by 270%.

The war led by the United States on European soil has aggravated the crisis that the rural world in Spain had already surfed: the PSOE-Podemos coalition government led by Pedro Sánchez admitted, in the Official Gazette, “the reduction of 20% in 2021 of the net income” of those engaged in agricultural activities. That is why, this year, he has offered to help them with a “deferral of payment of social security contributions” between March and May.

“Speculation must be fought. And we must enforce the law of the food chain so that farmers and breeders do not charge below production costs, ”explains Lorenzo Ramos, secretary general of the Union of Small Farmers and Breeders (UPA).

Attentive to see how to slash Pedro Sánchez, the extreme right of Vox takes advantage of social discontent and calls this Saturday to demonstrate: “The government is looting you. Get out and defend yourself”said the posters inviting them to join.

“Carriers, businessmen, freelancers, families and workers are suffocated by the policies of Pedro Sánchez, which have resulted in fuel increases, the imposition of new tolls, an increase in the price of electricity or the announcement of new green taxes,” they said. proclaimed

TOPICS THAT APPEAR IN THIS NOTE