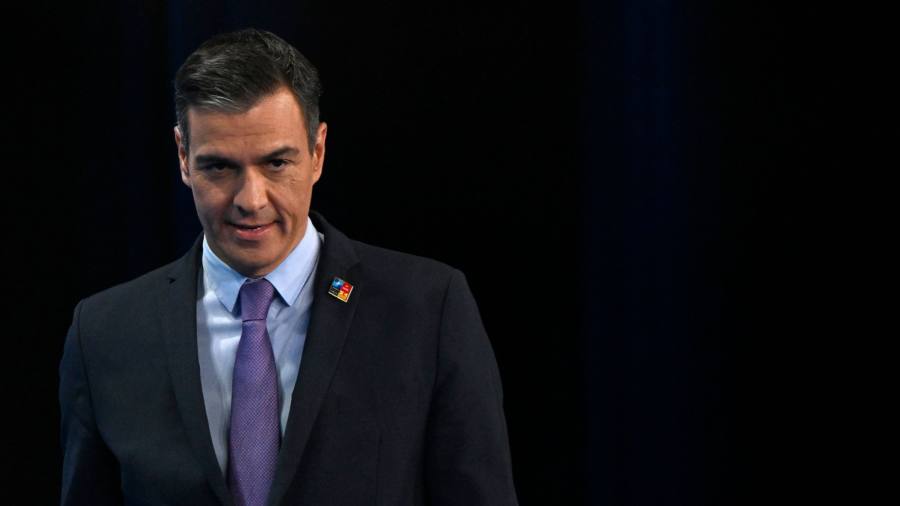 ECB and Spain set to clash over bank windfall tax

Spain has put itself on a potential collision course with the European Central Bank by proposing a tax on banks that leaders say goes against EU rules and threatens to weaken the sector.

The ECB is preparing to issue an opinion on the tax in a few weeks, according to its vice-president Luis de Guindos, a critical moment for Spanish Prime Minister Pedro Sánchez, who is defending the tax with his Socialist-led coalition government.

Private lenders have said that the government’s desire to prevent them from passing on the cost of the tax to customers is inconsistent with EU regulations and potentially destabilizing.

Sánchez wants to use the temporary measure to raise a total of 3 billion euros from lenders that would be spent to cushion the impact of soaring energy prices triggered by Russia’s invasion of Ukraine.

In July, Spain became the first country in Western Europe to propose a one-off tax on banks. Hungary has already introduced one. Britain’s new chancellor, Jeremy Hunt, is also preparing to include a bank levy in a series of tax hikes designed to undo the disastrous impact of a short-lived tax cut budget unveiled by his predecessor.

If approved by parliament, the Spanish levy would come into effect in early 2023 and last for two years.

The Spanish government – ​​whose tax will hit around 10 lenders, including the country’s two biggest banks, Santander and BBVA – has argued that rising interest rates are bringing “extraordinary” profits to the sector.

The ECB has raised its deposit rate by 125 basis points so far this year, and is expected to raise it another 75 basis points to 1.5% on Thursday next week. Higher central bank rates increase banks’ profit margins by allowing them to earn more interest on loans.

But lenders dispute the government’s claim and warn that the proposed levy is impractical and even dangerous.

Gonzalo Gortázar, chief executive of CaixaBank, one of Spain’s biggest lenders, rejected the principle of the tax, telling the Financial Times that ‘banks shouldn’t make extraordinary profits’ but were recovering still from a “long period of very low yields”. .

He added that the tax was “counterproductive because in an economic downturn we need a strong banking sector”.

Highlighting the conflict over the rules, he said the Spanish plan “is against EU regulations”. European Banking Authority guidelines, which are enforced by the ECB, require banks to reflect “all relevant costs” in loan pricing. . . including tax considerations”.

Gortázar said: “The proposal obliges us to do the opposite.”

The legislative text relating to the 4.8% tax, levied on banks’ income from interest and commissions, specifies that the cost of the tax “cannot be passed on to customers and non-compliance with the prohibition constitutes a serious offence”.

The EBA said: “Banks need to achieve an adequate return on capital to be viable over the long term. In this context, a healthy competitive environment and adequate cost reflection on product pricing are necessary, and strong long-term banks are a guarantee for financial stability.

The ECB is preparing to issue the opinion after receiving a request from the Spanish parliament, which is required to seek the opinion of the central bank.

The ECB has criticized plans by other governments to impose additional taxes on banks, particularly when the proceeds are used for general budgetary purposes and not held in reserve to cover the cost of possible banking crises.

Pablo Hernández de Cos, governor of the Bank of Spain and member of the ECB’s governing council, said this week that deliberations on the opinion focused on how the tax would affect the transmission of monetary policy and ” the solvency of the banking sector”. sector”.

A spokesman for the Spanish government said it “designed the temporary levy in such a way as to avoid any significant impact on solvency ratios, which is the aim of the EBA guidelines. when comparing the low rate [of 4.8 per cent] with the extraordinary profits already announced by the main banks.

The ECB’s opinion is not binding and its recommendations have already been ignored by the Spanish government. This year, Madrid continued to impose a €1,000 cap on cash payments that can be made involving businesses, a move aimed at curbing black market activity, although the ECB said in March that it was “disproportionate”.

Lithuania also ignored the ECB by introducing an additional tax on lenders despite the central bank’s warning in 2019 that it would have “a significant negative effect” on the country’s financial system.

Sánchez this week defended the bank tax, which he is pushing alongside new taxes on energy companies and the wealthiest Spaniards, saying, “We need to have more tax justice to have more social justice.”

Lorenzo Bernaldo de Quirós, president of Freemarket, a Madrid-based consultancy, predicted the government would go ahead with the tax even if the ECB criticized it. ” They do not care. It’s political,” he said. “They want to show voters that they are taxing the powerful and favoring vulnerable groups.”

2022-10-20
Previous Post: “The Spanish fans will be very loud and passionate here in Qatar”
Next Post: France, Spain and Portugal agree to build the Barcelona-Marseille gas pipeline