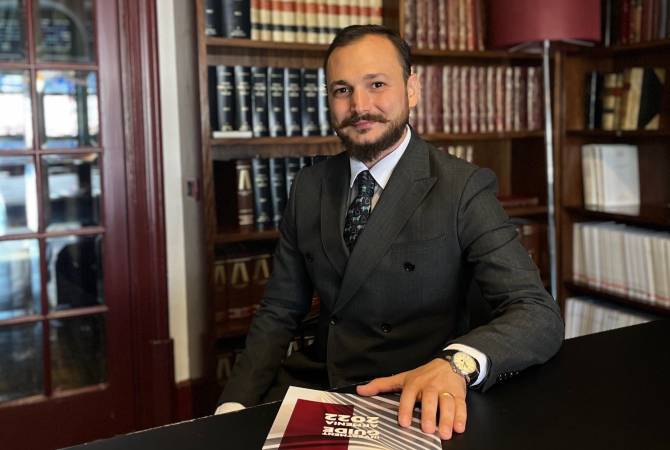 Mr. Grigorián, You have been appointed representative of Enterprise Armenia in Spain, there are plans to open an office in Spain, when will it officially start its activities?

It was an honor to be appointed as Enterprise Armenia’s representative in Spain. Since the appointment at the end of June, the entire Enterprise Armenia team in Spain is already assisting Spanish companies interested in the Armenian market.

The opening to the public of the office will take place on September 1, in the emblematic building of “Casa Comalat” -Avenida Diagonal 442, 3-2, 08037 in Barcelona-. Thus, from September, we welcome and await with open arms the visit of any foreign company or entrepreneur interested in the Armenian market or companies wishing to expand their activities abroad.

Economic diplomacy is becoming increasingly important in foreign policy and a political priority for the Armenian government. Strengthening the internationalization of Armenian companies and attracting productive foreign investments to the country will increase the competitiveness of the Armenian economy and strengthen our diplomatic relations with third countries.

The office in Spain will have two working vectors: promoting and facilitating foreign investment in Armenia and positioning Enterprise Armenia as a one-stop shop for investors.

As a representative office of a National Authority for the Promotion of Investments in Armenia, we will focus on raising awareness in Spain of Armenia’s investment and business opportunities and contribute to Armenia’s positioning on the investment map for Latin American and Spanish companies.

We will play a central role in the development of institutional cooperation between Spanish and Armenian authorities, partner organizations, BSOs, business communities and international companies. For these purposes, starting from September, we will organize monthly business events to attract new investments, promote exports, expand the business network in Spain and present the investment climate in Armenia and the advantages of doing business in Armenia. In addition, at least once a year, we will organize a business trip for Spanish companies interested in Armenia.

Once investors are interested in the Armenian market, we will consult with them on Armenian investment legislation, regulations, government incentives and potential investment partners.

To invest in Armenia, which sector could particularly interest Spanish businessmen? What potential do you see in Armenia?

Armenia has a unique geostrategic position that can serve as a bridge between East and West, the EEU and the EU. Therefore, we must work towards such a goal to show that Armenia can be a natural hub for regional international businesses, as it has access to large export markets on preferential terms.

Additionally, Armenia has skilled, well-educated and cost-effective talent and low operating costs that are hard to find in Europe. In addition, we must highlight the comprehensive system of fiscal and financial incentives, macroeconomic stability, reliable financial sector and the policy of openness to foreign investors.

Although the promotion of export and import goes beyond the scope of Enterprise Armenia, we aim to foster the presence of Armenian companies abroad.

Therefore, we will organize business delegations to accompany them on visits to Spain and help them, through our business partners, to organize institutional capacity building, networking or business-to-business events.

These services will be provided not only to large companies but also to small and medium enterprises to strengthen their presence abroad.

And finally, what else would you like to say about the office and your work?

As an Armenian in the Diaspora, I realized the importance of getting more actively involved in strengthening the country’s economy.

In this regard, I hope that my knowledge of the political, economic and commercial situation in Spain will play a vital role in the development of the country’s economy through the investment of foreign companies and the internationalization of Armenian companies. .

As an international business lawyer, I completed an LLM in International Legal Studies at Georgetown Law in Washington, D.C. Since 2012, I have worked in one of the best law firms in the Iberian market in cities such as New York, London, Sao Paulo, Barcelona and Madrid. Today, I am the managing partner of GK Group Legal, an international law and consultancy firm based in Barcelona, ​​which will soon open its offices in Yerevan. Therefore, I am firmly determined to apply all the skills acquired throughout my career to the economic growth of Armenia.