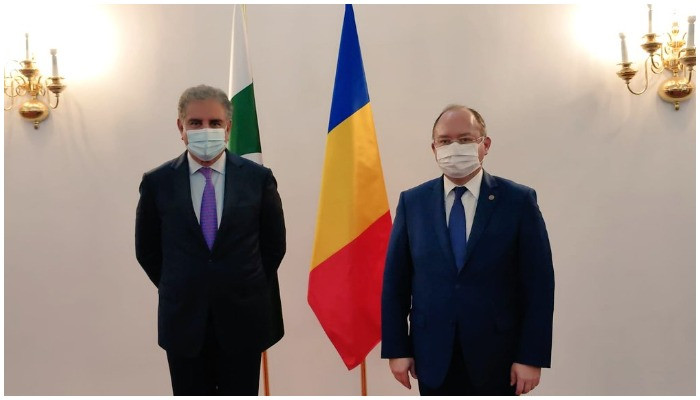 During bilateral talks, the two foreign ministers reviewed the full range of bilateral relations. Discussions were held on exploring possibilities to deepen engagement in different sectors, including trade and commerce, investment, defense, education, labor, science and technology and culture. .

The two countries agreed to hold the next round of bilateral political consultations in Islamabad and to revive the Joint Economic Commission.

Exchanging views on regional issues, the Foreign Minister briefed his Romanian counterpart on Pakistan’s efforts for a peaceful and stable Afghanistan and ongoing human rights violations in Indian Jammu and Kashmir (IOJK).

He thanked the Romanian government for announcing the donation of 500,000 doses of the COVID vaccine to Pakistan.

During the meeting with the Romanian Minister of Economy, the two sides appreciated the increase in bilateral trade despite COVID and discussed ways to further strengthen economic ties.

Earlier, Qureshi opened the “Pakistan Cultural & Trade Exhibition Center” at the Pakistani Embassy in Bucharest. The Center will serve as a venue for a permanent exhibition of Pakistani export items and for holding cultural events aimed at promoting tourism and the country’s sweet image.

Addressing the Pakistani community in Romania, Qureshi highlighted the measures taken by the government to ensure the well-being of the Pakistani diaspora.

Qureshi meets the president of the Spanish Congress of Deputies

MADRID: FM Qureshi called the president of the Congress of Deputies of Spain Meritxell Batet and discussed ways to strengthen bilateral Pakistan-Spain relations in various fields.

Stressing the importance of parliamentary exchanges, the Minister of Foreign Affairs invited the Spanish parliamentarians to visit Pakistan, which would help to cement the areas of cooperation in progress.

Batet agreed with Shah that the threat of COVID-19 should be addressed through global cooperation through judicious distribution of vaccines and providing fiscal space for developing countries to invest in health and revive their economies.

President Batet thanked Shah for Pakistan’s assistance in evacuating people of concern from Afghanistan. The two sides expressed converging views on the need to retain qualified human resources in Afghanistan to manage the functioning of various state and social institutions.

Highlighting the recent 17th extraordinary session of the OIC Foreign Ministers Council (OIC-CFM) hosted by Pakistan on December 19, 2021, to deal with the urgent humanitarian situation in Afghanistan, the Minister of Foreign Affairs reiterated the need to engage the interim government in Afghanistan by the international community.

He appreciated the interest of the EU and the donation of 20 million euros from Spain for humanitarian aid to the Afghan people. The commitment of the Spanish government to play a supporting role in ensuring the education of children, especially Afghan women and girls, was highly commendable.

Batet accepted Shah’s invitation to lead a parliamentary delegation to Pakistan in the near future.