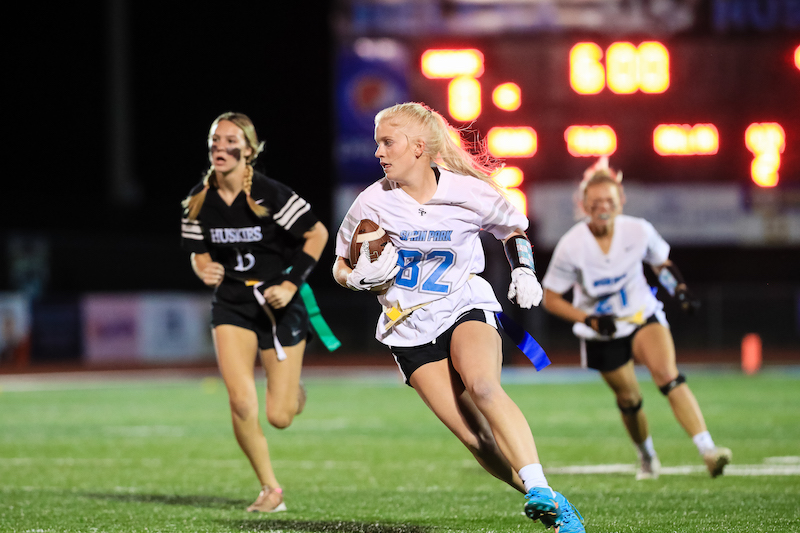 HELEN – Thursday and Friday nights may be devoted to football, however, another sport has been played in the spotlight this past week. Flag football teams Helena and Spain Park played each other and played the Hoover Buccaneers on Wednesday, October 5.

Spain Park took on Hoover in the first game of the night at Helena. The Jaguars beat the Bucs 26-0. Spain Park quarterback Emily Stricklin had four touchdown passes in the game against Hoover.

Stricklin had the first touchdown pass of the night to Olivia Williams. A second pass to Jenna Kate Hutchison and a final pass to Rory Payton gave the Jaguar the win over the Bucs.

The second match of the evening was between Helena and Hoover. The Huskies were tied with the Bucs at halftime 6-6, unfortunately Helena then lost to Hoover 13-6. Hoover scored another touchdown with less than two minutes remaining in the second half.

Helena’s Grace Wilkins and Ava Middlebrooks intercepted the ball from the Buccaneer, leading to Helena’s only touchdown of the night from Middlebrooks.

In the final game between Helena and Spain Park, the Jaguars wrapped up the night with a 27-6 win over the Huskies. Spain Park Emily Stricklin had three touchdown passes and one running touchdown.

The Huskies couldn’t catch up after trailing Spain Park by 14 as they entered the second half. Trinity Watson of the Huskies managed to have a pick six from 50 yards in their game against Spain Park.