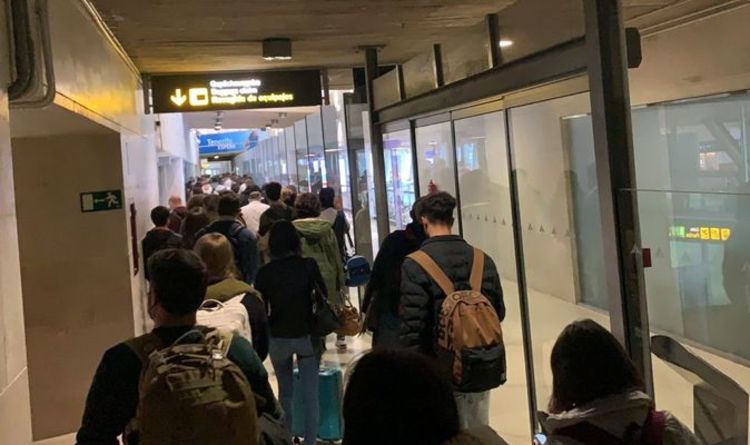 Holiday “chaos” in Spain: the fury of “unacceptable scenes” in major destinations | Travel News | To travel

Tourism bosses have now called on the Spanish government to act urgently as massive queues and delays are impacting vacations. British tourists have been caught in the “chaos” of tourist hot spots.

ALA President Javier Gándara said: “Spain’s reopening to international tourism, added to other factors such as new migration measures with the UK after Brexit, are causing a significant saturation of controls in our country, requiring a longer registration time. At the border.”

Since Brexit, British tourists need to stamp their passports every time they enter and leave the Schengen area, including Spain.

Britons are only allowed to visit Spain 90 days out of 180 under new Brexit laws.

The new legislation is believed to have resulted in an increase in queues at Spanish border controls.

Gándara said: “Airport congestion is causing great harm to passengers, both domestic and international, in the form of delays or loss of flights or connections within the country and additional difficulty in the operation of airlines, already complex due to the pandemic. , projecting a terrible international image of Spain.

“Spain cannot now afford congestion at its airports. At a key time for the tourism sector like Christmas and ahead of the summer, it is imperative to improve passport control, as the current situation is a grievance for passengers, for flight operations and for the image. from Spain abroad.

“As we warned a few months ago, the non-adoption of the relevant measures has caused significant damage due to the reactivation of international tourism and the reopening of roads interrupted due to the pandemic, as was the case cases in the United States. “

The ALA rage has been echoed by hotel owners in Tenerife who have said new coronavirus checks are causing delays.

Ashotel group chairman Jorge Marichal said it was not acceptable to have more than 200 people crammed into the arrival corridors and double that if two flights coincided.

According to hoteliers, there was no social distancing and passengers had to wait an hour in the queue.

Marichal said: “More than a year has passed since the reactivation of passenger mobility at airports and we continue to learn nothing.

“The first image that a passenger or tourist has upon arrival in the Canaries is the airport.

“This control is the way to keep the disease at bay, but it is essential to provide these legal proceedings with the necessary resources, in this case staff, or to modify the points on which the necessary documentation is required.

“These circumstances are inconceivable after all that we have been through.”

2021-12-09
Previous Post: Immigration to Spain: How a migrant teenager was rescued from the streets of Madrid by ‘Mamá Amélie’ | United States
Next Post: Sto. Niño de Cebu returns to Spain