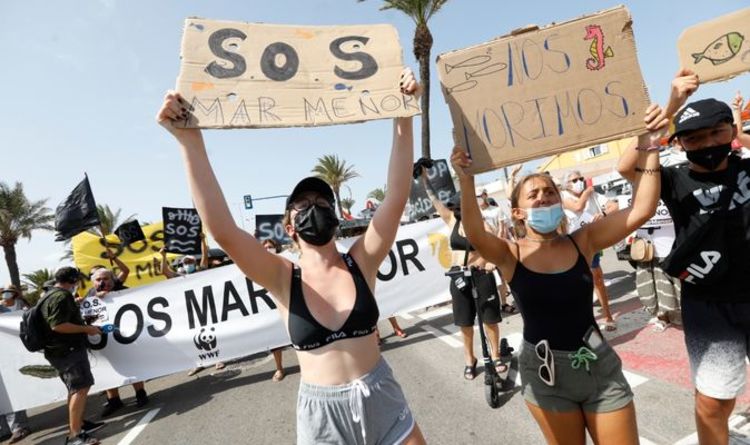 A new study has found that the tourist area of ​​Mar Menor loses income every night due to pollution. Holidays around the Mar Menor decrease by one euro (83p) per night for every cubic millimeter of chlorophyll found in the waters of the lagoon. He lost an additional £ 1.54 per night for every negative comment on social media.

The Mar Menor ‘Smaller Sea’ is the largest saltwater lagoon in Spain and is located near the sun of Cartagena.

Tourists flocked to the areas around Mar Menor to enjoy the clear and safe waters of the lagoon.

However, in recent years, the state of Mar Menor has deteriorated significantly due to pollution.

In 2017, all beaches in Mar Menor lost their Blue Flag status due to polluted water conditions.

Since 2019, there have been two major environmental incidents where thousands of dead fish washed up on the shores of the lagoon.

The pollution is believed to have been caused by intensive agriculture in the surrounding areas.

The chemicals in the fertilizers deprived the water of oxygen and exterminated many of the lagoon’s creatures.

A new study by Ricardo Teruel of the Polytechnic University of Cartagena has found that the state of Mar Menor is costing the region’s tourism industry dearly.

Teruel has found that every milligram of chlorophyll in the Mar Menor lowers vacation prices by one euro (83p) per night.

He also found that negative comments about the lagoon on social media had dropped prices by almost 1.84 euros (£ 1.54) per night.

The most affected areas were those closest to the lagoon that did not have access to the Mediterranean Sea.

Teruel said: “The price effect is even more pronounced in non-La Manga accommodation, where guests have the option of swimming in the Mediterranean (sea).”

In August 2021, when around five tonnes of dead fish washed up on the shores of Mar Menor, the water would have turned green.

Onlookers said the stench was horrible and regional officials were forced to close eight beaches.

The area around Mar Menor was once very popular with British expats due to its wonderful climate and many amenities.

However, on an expat forum, one person said, “Looking back, I wouldn’t buy in this area anymore.

“The entire Mar Menor lost its Blue Flag status a few years ago. There is no sign of a return.

The situation has led tens of thousands of residents to participate in protests, calling on the government to take action.

A petition to save the Mar Menor and give it one person’s legal protection, reached half a million signatures in October last year.

Client Earth and Ecologistas en Acción have filed a formal complaint with the European Commission to urge Spain to act.

2022-01-07
Previous Post: Lanzarote, home to the Spanish coast with the highest number of illegal hotels | Society
Next Post: United States, Spain and Morocco collaborate to carry out rescues at sea – Orange Leader