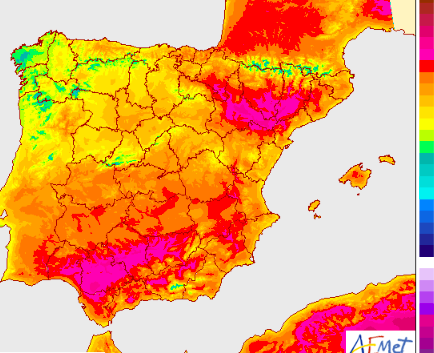 Scorching temperatures in Spain this week with 35C in some areas Credit: Twitter @AEMET_Esp

Spain’s National Meteorological Agency has warned of rising temperatures across most of the country this week from Monday May 16 to Friday May 20.

Spain is expected to experience a rise in temperatures this week, warns the Spanish National Meteorological Agency.

“This week we will have to keep an eye on rising temperatures🌡️. Tuesday’s map in the image, with values ​​above 35°C in the Ebro Valley/Guadalquivir, is already reminiscent of summer, but it is expected to increase much more throughout the week,” AEMET tweeted. .

AEMET’s forecast for temperatures in Spain over the coming week is as follows:

Temperatures in Spain on the rise, except in the northwestern peninsula, the Mediterranean area and the Canary Islands, where they will remain unchanged.
Southwest winds in Galicia and on the northern plateau, with strong intervals on the Galician coast. To the west in the Strait of Gibraltar and to the northeast in the Canary Islands. Light and variable in the rest.

Maximum temperatures will fall in northern Galicia and western Asturias but increase in most of the interior of the peninsula and on the northern coast of Catalonia. Temperatures are expected to exceed 35°C in the Guadalquivir Valley and the Middle Ebro. Minimum temperatures will drop in Galicia. Little change in the rest. East light in the Strait of Gibraltar. Variable light wind in the rest of the peninsula and the Balearic Islands, becoming west in the Cantabrian Sea and tending south in the rest. Alizé in the Canary Islands.

With some uncertainty, temperatures are expected to rise, with highs exceeding 35°C in the Tagus, Guadiana and Guadalquivir valleys. A northerly wind is expected in western Galicia and predominantly light easterly winds in the rest of the peninsula and the Balearic Islands, although with strong easterly winds in the Strait of Gibraltar. In the Canary Islands, trade winds, with cloudy intervals in the north of the islands and perhaps some weak and local rains in the islands of greater relief. Temperatures unchanged.