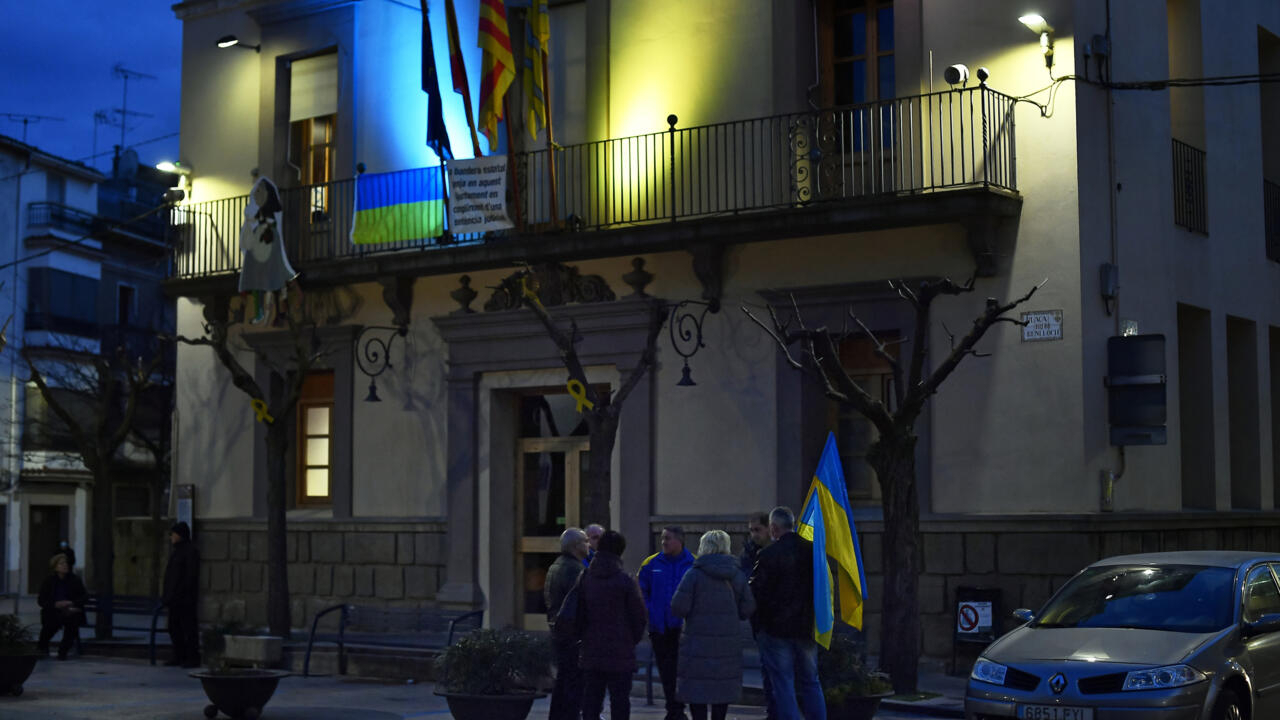 In Spain’s “Little Ukraine”, the anguish of war

Guissona (Spain) (AFP) – On the calendar of the Mykola Grynkiv cybercafé, every day since February 24 has been circled in black, the Russian war stopping in this village in northern Spain where one inhabitant in seven is Ukrainian.

Before the invasion, residents of Guissona – which is about 115 kilometers (70 miles) northwest of Barcelona – would drive to Grynkiv’s business to log on, make photocopies or make a phone call from the one of the private cabins aft.

But since Russia invaded Ukraine, this cybercafé in the heart of Spain’s northeastern region has been transformed, its floor covered with boxes full of donations that will be trucked to Poland.

Like millions of other Ukrainian expats, Grynkiv’s priorities have completely changed in the space of a week.

“Now the business is no longer running. I am losing money but I don’t want my country to lose” the war, says this stocky 48-year-old, who arrived in Guissona from western Ukraine a while ago. over 20 years. since.

“If I lose and my country wins, it doesn’t matter. I’ll make it up to you one day,” he says in a rare moment when his cell phone stops ringing.

Until last week, she worked as a dermatologist in Ivano-Frankivsk, a city in western Ukraine.

But when the invasion started, she left, heading for Guissona where she spent part of her childhood and where her parents still live.

“My uncle told me to go to Poland because I didn’t know what to do in Ukraine, I was really scared,” admits the 24-year-old.

“The war has begun”

Of Guissona’s 7,200 residents, 1,053 are Ukrainians, the second-largest nationality group after Romanians, many of whom are drawn to the area by job opportunities offered by bonArea, a powerful agribusiness based there. .

The growth of the company, which started hiring foreign labor in the 1990s, has transformed the city, which today has more than 43 nationalities.

Many balconies, including that of the town hall, are draped with anti-war banners and posters or the blue and yellow flag of Ukraine in a broad show of support, for which Natalia Tvardovska is grateful.

When the war broke out, the 40-year-old waitress, who has lived in Guissona since 2006, said she didn’t need the media to tell her the Russians had invaded.

“My aunt called me from (the southern port city of) Kherson and said, ‘The war has begun’,” she said, recalling the anguished early hours of February 24.

Since then, she has barely been able to sleep, her large eyes dark with fatigue.

Her husband, who had returned to his hometown in western Ukraine after a death in the family, had been trapped by the sudden outbreak of war, unable to leave with all the men between the ages of 18 and 60 called to the fight.

“I hope this all ends soon because I just don’t know what to expect. I don’t know when he’ll be back,” she said.

Also unable to distance himself from the news, Leonid Komirenko fears that the Russian army will enter the port city of Odessa at any time, his birthplace he left 13 years ago.

“I was really nervous the first few days and wondering if I should go back to help or what to do,” said Komirenko, 41, who works at the local slaughterhouse.

“But my wife just cried and said to me, ‘When you die in the war, I’ll be all alone,'” he sighs, admitting he hasn’t quite made up his mind yet.

“If it gets worse for Ukraine, I will think about going back.”

At the town hall, we know of only one case where a resident left to join the fighting, although some went to Poland to seek members of his family.

To date, there are already 13 refugees in Guissona and the local authorities are preparing to welcome around 100 of them.

“The Ukrainians were the first to arrive and they really helped us build this city,” says Mayor Jaume Ars.

After hours of paperwork to obtain the necessary permits, a truck carrying 12.5 tons (27,558 pounds) of humanitarian aid is soon ready to leave for Poland.

As the driver climbs behind the wheel, Grynkiv and the mayor wave goodbye.

It will take him three days to reach Pruszkow, near the capital Warsaw, where different groups will distribute the goods to the thousands of Ukrainian refugees streaming into Poland.

As he walks away, Guissona is already busy preparing for his next expedition.

2022-03-05
Previous Post: Crimean-Congo haemorrhagic virus spreads to Spain
Next Post: 6 countries in Latin America and Spain are ‘stranded’ for laundering money with cryptocurrencies