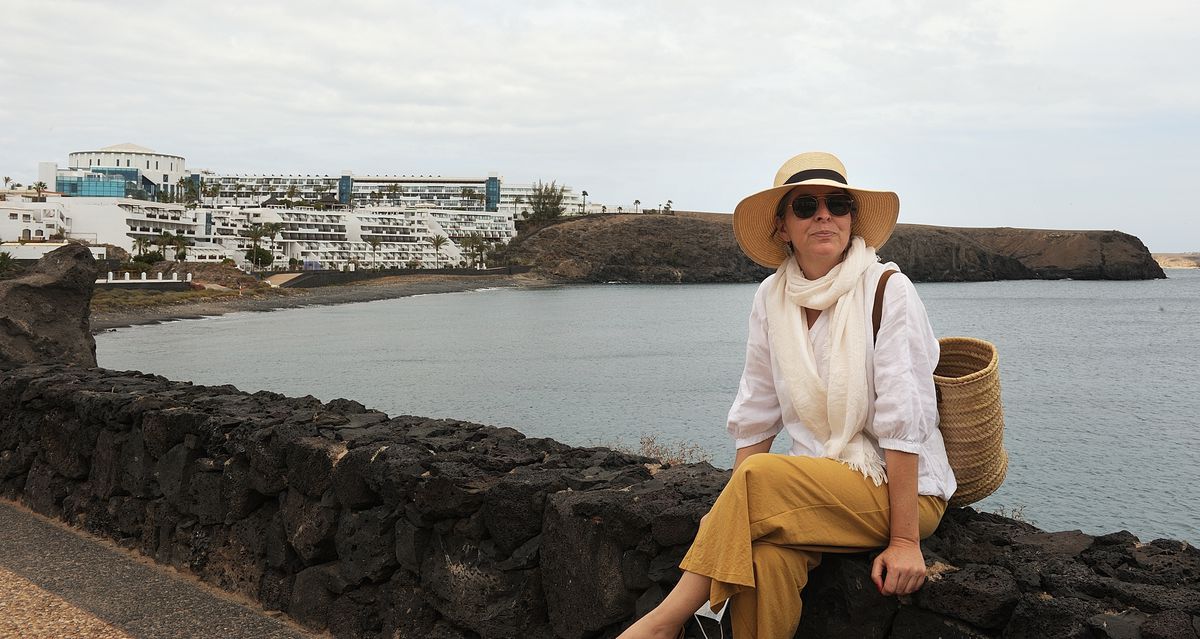 Lanzarote, home to the Spanish coast with the highest number of illegal hotels | Society

There is no stretch of coastline in Spain with a greater number of illegal hotels than on the Canary Island of Lanzarote, especially in the small town of Yaiza. There, in the middle of a spectacular volcanic landscape of black rock, stands the Hotel Sandos Papagayo, a mass of white concrete on the seafront which, in addition to having its permit revoked in 2007 by the High Court of the Canaries , also violates the law because it is too high and encroaches on a public pedestrian walkway leading to the beach.

Often compared to the Algarrobico hotel in Almeria – another symbol of uncontrolled development – there is one main difference between these two vast tourist establishments which have been the target of years of litigation: the seaside resort of Lanzarote is open to the public. In this southern corner of the island there are also other illegal hotels, such as Princesa Yaiza, Son Bou and Dream Gran Castillo. Together, they are considered the four most serious cases of the 44 establishments whose licenses were overturned by the courts of Lanzarote.

A unique island, Lanzarote is classified in its entirety as a Unesco Biosphere Reserve and was a pioneer in limiting its urban growth 30 years ago, after artist and environmental activist César Manrique led a local campaign to protect the island’s fragile ecosystem.

But Lanzarote has also seen the worst of property corruption unfold. Of the seven municipalities that make up the island, six have seen a mayor convicted of a crime related to construction or real estate; namely in Yaiza, Teguise, Arrecife, San Bartolomé, Haría and Tinajo; and there is one more key essay in the works. Councilors, town planners and entrepreneurs fell like dominoes, many ended up in the local Tahiche prison. Even the almighty Dimas Martin, former president of the Lanzarote Island Council and former leader of the Independent Party of Lanzarote (PIL), has finally been caught by the long arm of the law. However, the buildings themselves have been more difficult to demolish: the legal battle against urban corruption has left a trail of concrete skeletons and illegal tourist establishments, with some like the Hotel Sandos Papagayo having no easy solutions. .

When I had to take a deposition from a mayor in a real estate corruption case, the prosecutor did not show up, the judge knew nothing and I was alone in front of 15 defense lawyers

“Lanzarote has not been more corrupt than other regions. What happened here was that there was a backlash against unbridled urban development, leading to legal action that uncovered cases of corruption, ”said Dolores Corujo, the current president of the city. island council, which points out that two municipalities, Yaiza and Teguise, “granted a multitude of licenses in violation of the regulations of the island”. According to Corujo, “the [hotel] Son Bou has a demolition order from Yaiza town hall as it is considered illegal and impossible to legalize. The owners have appealed and we are awaiting the court ruling. As for Princesa Yaiza, she was also affected by the partial cancellation of Yaiza’s general zoning plan. [which tried to legalize it], which makes it illegal.

The biggest struggle right now is with the Sandos Papagayo hotel. According to the island’s council, this hotel is probably committing the biggest urban violation on the coast, but the company behind and officials in Yaiza Town are trying to save it. “We believe that the hotel can be legalized”, explains Daniel Valenzuela, lawyer for this tourist complex, who explains that the legalization process could involve the removal of 111 of its 475 rooms and a partial demolition of its dome. “There is still a long way to go before we can talk about the demolition of the hotel,” he says. However, the lawyer Irma Ferrer, representative of the citizens’ association Transparence Urbaine, has a very different vision, deeming impossible to resolve the fact that the building occupies part of the pedestrian access to the beach, which is now accessed by the hotel, using an elevator.

The Papagayo Hotel is one of the establishments that was licensed during a four-day storm of urban corruption in 1998. As highlighted by the conviction handed down by the Las Palmas Provincial Court in the so-called Yate case – a name that combines the names of the municipalities of Yaiza and Teguise – the mayor of Yaiza, José Francisco Reyes, has granted an overabundance of licenses for his personal benefit, authorizing the construction of more than 1,500 tourist beds in a single day. According to court documents, on May 29, 1998, the city received documents for the construction of seven large hotels. As of June 1, it was all approved. As the judgment underlines, this was done in “full knowledge of the illegality of their concession due to a manifest inconsistency with the town planning rules in force at the time”.

Island environmentalists who started the El Gincho organization with artist César Manrique had for years battled bulldozers to protect this incredible lava-shaped landscape, but it was lawyer Ferrer who convinced his fellow environmentalists that they should pay more attention to money, focus on criminal proceedings to fight corruption. According to Ferrer, even then, the procedure was far from straightforward. “I used to attend misdemeanor trials in which a dog had bitten a neighbor and there was the judge, the public prosecutor, the prosecutor, the defense lawyer and the representative of the insurance company, ”she says. “But when I had to take a deposition from a mayor in a real estate corruption case, the prosecutor didn’t show up, the judge didn’t know anything and I was alone in front of 15 defense lawyers.” According to Ferrer, she wasn’t taken seriously until people started being sent to jail.

The intensification of the investigation of urban crimes here has a lot to do with the arrival on the island of the prosecutor Ignacio Stampa and, some time later, of Javier Ródenas. “Lanzarote is very special; the power of the local bigwigs is striking; my feeling coming here as a foreigner was that there were various island chiefs that no one would dream of questioning or denigrating, ”says Stampa. “In addition, it is a very small place and there is no one who is not a relative or friend of a corrupt individual or businessman with control over the funding, so it is very difficult when you’re in a position like Irma’s or I was in, because you’re the enemy They go for the jugular.

The story took a new turn when a Socialist Party (PSOE) politician Carlos Espino reported a bribe from a businessman to unlock a development project, which led to the introduction of undercover officers from the Central Operational Unit (UCO) of the Civil Guard. , in what has been dubbed Operation Union. “The moment they started bugging phones on this island, everything came out, absolutely everything,” said Isabel Lusarreta, director of the La Voz de Lanzarote news agency, who devoted much of her time to time to follow the trail of corruption here. “One [tapped] one phone call led to another, raising questions that had absolutely nothing to do with what was originally investigated, so Operation Union ended up being split into several surveys.

In pursuit of the “boss” of a scheme to collect illegal commissions, UCO agents used wiretaps that took them to Tahiche prison. In one of the most unusual scenarios of the fight against corruption in Lanzarote, Dimas Martin, former president of the island’s council, former mayor and leader of the Independent Party of Lanzarote (PIL), was arrested while he was serving an eight-year sentence for the improper construction of an agro-industrial complex in Teguise. Despite his imprisonment, the politician had given precise instructions to the councilors of the Arrecife commune to obtain payments from the businessmen, as evidenced by the tapes and documents found in his cell.

In the decision of the Provincial Court of Las Palmas of 2019 on the main direction of Operation Union in which Martin was again sentenced to prison with two advisers from Arrecife and seven others, the unique way in which he used his power over others emerged: “During the trial, a particularly embarrassing conversation was overheard between Mr. Dimas Martin and the then director of the Tahiche Penitentiary Center – and we use the adjective embarrassing in relation to this last interlocutor, ”the court concluded, referring to a recording in which a corrupt politician tells the prison director that he will speak to a city councilor to“ see where we can put you ”.

Ferrer goes to Tahiche Prison every Friday as a volunteer to give legal advice to inmates, but she skips Module 2 because “that’s where everyone is.” After years of hardship, insults and pressure, she acknowledges that the struggle has taken its toll, especially given the size of the island. However, she thinks she and others did the right thing. “It was what we had to do, otherwise we would be much worse; even if they end up deporting us and we have to leave the island, ”she said. “We have so far; some escaped, but the law was reported; now we are fighting to make it happen.

Meanwhile, concrete horrors litter the island: half-built apartments and bungalows whose construction has been halted on the basis of one illegality or another. Hailed in their day as high-end tourist resorts, many are now nothing more than graffiti-covered and garbage-filled ruins, home to homeless people and squatters. In one of those ghost housing estates in Costa Teguise, on plot 214 of the Club del Rey apartments, a man shouts from a balcony: “And we are the criminals?