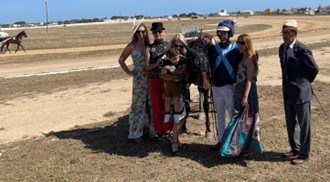 ANNAPOLIS, MD – A delegation of officials and professionals from the horse and harness racing industry from the United States and Maryland spent five days attending several important equestrian events on the Spanish Balearic island of Menorca, located at sea Mediterranean, from May 25 to 30, 2022.

Anne Litz of the Maryland Horse Industry Board (MHIB); Cheryl Stambaugh of the Maryland Standardbred Fund; Lisa Watts of Rosecroft Raceway; dressage trainer Julie Anne Staiger; and Jack Burke of Winbak Farm, the largest standard breed horse breeder on the East Coast with farms from Maryland to Ontario, Canada, made up the delegation led by equine industry consultant Alejandra “Alex” Abella based in Annapolis, MD.

The delegation participated in the second annual Menorca International Horse Convention, where Maryland horse industry professionals shared important lessons about how the state’s varied industry has come together with the help of the Maryland Horse Industry Board.

The convention established the unique historical and equestrian parallels between Maryland and Menorca, including a historic naval connection through the Menorcan-born Admiral Ferragut and the importance of harness racing in both the state and on the island. The American equestrian delegation made the front page of the Menorcan newspaper the day after the Convention, as well as in several other press outlets.

Other important visits for the delegation include: the Hipodrom Municipal De Mao – Mahón, one of the two harness racing tracks in Menorca; the Escola Equestre Menorquina to learn more about the purebred horse of Menorca (PRMe); and the main harness racing and the fifth edition of Hats and Horses, an Ascot-style social event held at the Torre del Ram racecourse.

The annual Hats and Horses event includes vintage cars, live music, several harness races and bets, as well as demonstrations of several equestrian disciplines on the island. The US delegation was again featured in Menorca and other media the day after the event.

The tour was sponsored and organized by Ariadna Vilalta, founder of Hats and Horses. Gemma Alcaraz of Menorca on horseback/Son Bou Rutes a Cavall organized the harnessless equestrian events, and the Meliá Cala Galdana hotel, a beachfront property of Meliá Hotels International, hosted the delegation.

The photo on the left shows members of the American delegation with the driver and relations of a winning driving horse, and the owner of the driving track of Torre del Ram, Biel Olivar. The Torre del Ram track was designed by Olivar’s sister and father in the 1970s, following the design of an American track

On the right, Gemma Alcaraz of Son Bou Rutes a Cavall, performing the traditional ‘bot’ tunes above the ground on a Minorcan Thoroughbred.

2022-06-04
Previous Post: Holidays in Spain: cruise ships will be charged an additional tourist tax due to pollution | Cruise | Travel
Next Post: What Buhari Told His Successor Governors Before Visiting Spain – Adesina