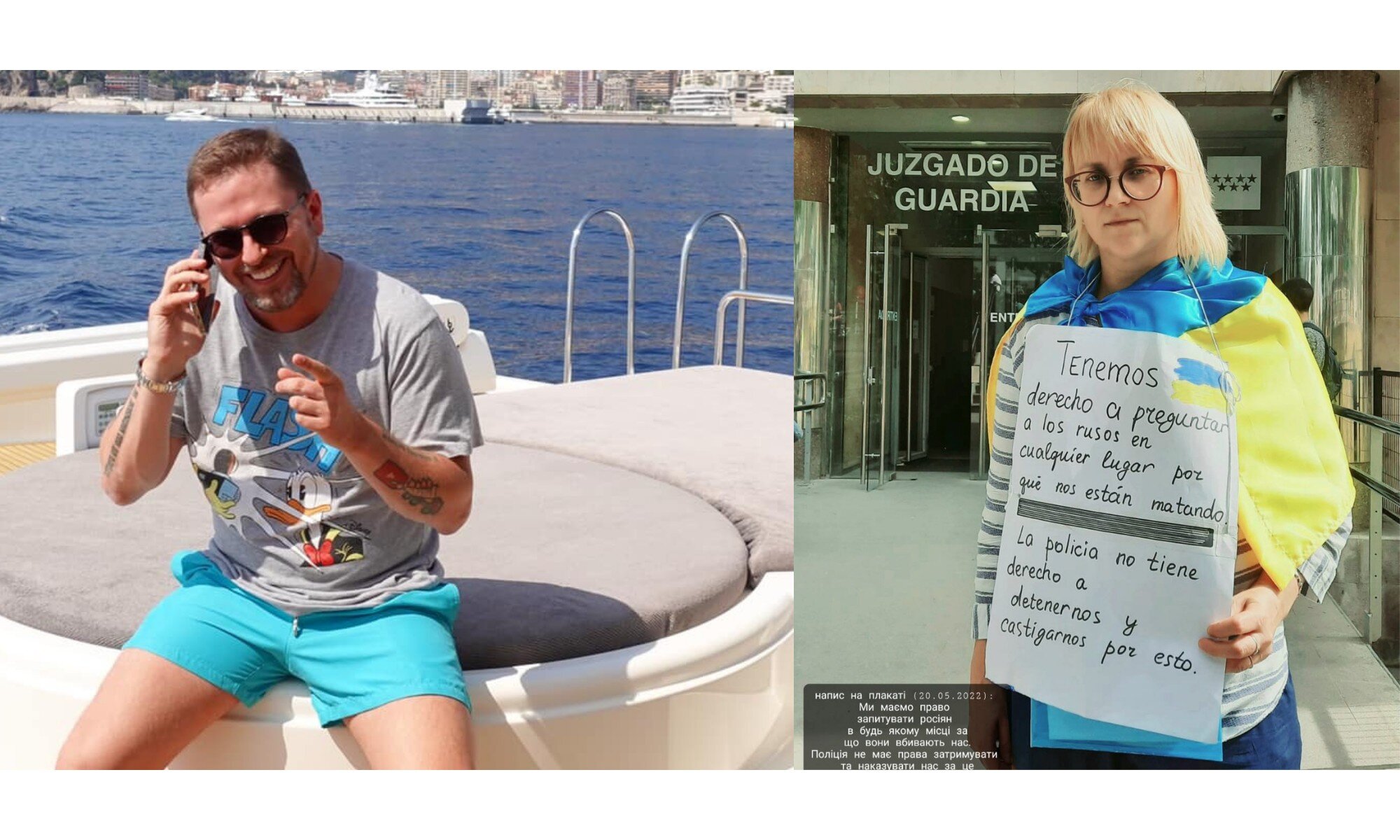 Anatoly Shariy, a pro-Kremlin propagandist detained in Spain on May 5 at the request of Ukraine, has been released on bail and is to remain in town. He still lives in the same mansion in Tarragona where activists from Barcelona’s Maidan have come to demonstrate twice since Russia invaded Ukraine on February 24.

Shariy continues to record videos that discredit the Ukrainian government, including its laws, and give prominence to the Russian agenda. On May 16, he shot a video “I’m afraid to live in Spainin which he describes recent actions during the march of the “Immortal Regiment” in Madrid. The largely pro-Russian movement originated in Western Siberia but has spread to other regions and commemorates those who fought or died in World War II.

Shariy accuses Ukrainian Sveta Nuzhna, an activist who walked out with a Ukrainian flag and poster, of breaking the law, being a provocateur and beating the police.

Why did this incident happen on May 8 and could the Spanish authorities have prevented it? Undoubtedly.

More than 6,000 people have called for the ‘immortal regiment’ to be banned in Madrid by signing a petition it says:

“Under the reign of President Vladimir Putin, this holiday has become a demonstration of Russia’s military might. Thousands of civilians dressed in military uniforms, including children and babies, attend parades and paramilitary marches with military symbols and aggressive banners. This year, the Russian Embassy in Spain is organizing one of these marches in the streets of Madrid. We believe that in the midst of a military conflict in which the Russian army invaded Ukraine in clear violation of international law, Russian military holidays are inappropriate as we welcome thousands of Ukrainian refugees. We will not allow the streets of Madrid to be filled with symbols of Russian militarism promoting arms, imperialism and xenophobia.

Nevertheless, the march went as planned. Anti-Putin activists naturally took to the streets against the “immortal regiment”. One of them was the political refugee Nuzhna. Carrying a poster reading “Russians, why are you killing us?” and the flag of Ukraine on her shoulders, Nuzhna entered the column of the “Immortal Regiment”, shouting “Glory to Ukraine!” She was brutally arrested after Liu Sivaya, a well-known pro-Kremlin Spanish blogger participating in the “Immortal Regiment”, called the police.

One of the policemen tackled the Ukrainian activist to the ground, then four policemen took her away. After interacting with police, she was left with eight bruises.

Nuzhna was searched and locked in a remand center for five hours. In total, she spent 32 hours at the police station, where she spoke about her humiliating treatment. From now on, Nuzhna must stay in the city and is obliged to report regularly to the authorities. A case has been opened against her over an alleged attack she allegedly launched on the officers detaining her.

On May 10, Nuzhna wrote about her Facebook page: “I will be tried for a mythical beating of a Spanish policeman. This is a blatant lie and intimidation of Ukrainians by the Spanish government, which authorized a march of our assassins in Madrid. Here is a video of my crime. The video shows how I “beat” a policeman… You can see in the video what happened next in the video. They believe that we should remain silent when we are killed by racists.

In discuss this episode, Shariy comments on an interview with Ukrainian channel 24. He calls the journalist “stupid” (this is his usual level of misogyny, shame and xenophobia), and brandishes the TV channel itself as “rubbish” (typical of Shariy when referring to any Ukrainian media). Shariy insults Nuzhna (calling her an “idiot”) and claims that she attacked the police and “thrown mud” in Spain.

In addition to the request for extradition to Ukraine, requests have been filed against Shariy relating to threats to life, homophobia, xenophobia, misogyny and other crimes, but he has not changed his rhetoric.

Criticizing Nuzhna, Shariy calls Spain’s aid “colossal”, despite the well-known plight of the refugees. Many Ukrainians would rather go home under bombardment than face the indifference of the Spanish bureaucratic machine and the general lack of support.

The Russian propaganda propagated by people like Shariy is the reason why many Spaniards, even in the third month of the war, protest against the supply of lethal weapons to Ukraine and consider the Ukrainian diaspora as “Nazi”. How deep is the misunderstanding? After a concert in Barcelona by Putin supporter Emir Kusturica was initially canceled following hundreds of appeals, it is now listed as “reprogrammed” on the website of the Palace of Catalan Music.

Some media now call Shariy an “innocent” human rights fighter, unjustly persecuted by the Ukrainian “Nazis”. Additionally, a number of articles have been published that refer to the “bloody cradle” brought to Shariy’s house as a threat to her child.

The crib, along with a TV, computer and underwear, are just some of the items stolen by Russian marauders. On a microwave with traces of “blood” was written “Shariy is a Russian propagandist responsible for the genocide in Bucha”.

Voting in the Eurovision Song Contest final on May 14 arguably shows just how low the level of popular support currently is for Ukraine in Spain. As for the official position, the Spanish authorities have not yet banned any manifestation of denial of the genocide of the Ukrainian people; they have not yet recognized what is happening in Ukraine as a genocide; and they don’t ban the Russian army’s “Z” symbol on the streets. In fact, you can find a lot of “Z” graffiti in Spanish cities. If a resident appealed to the local government to have the graffiti removed, it would be done, but on a general basis rather than because of what it depicts.

As things stand, two people in Spain, one pro-Putin and one anti-Putin, can no longer leave their town and must report to the police. The Ukrainian Diaspora, which for many years demanded the extradition of the traitor Shariy and the banning of the Immortal Regiment, is doing everything possible to protect Nuzhna. As to what justice will be served by the Spanish authorities for these two very different cases, time will tell.

Translated from Russian by Yeva Podurian

Found a spelling mistake? Let us know – highlight it and press Ctrl+Enter.