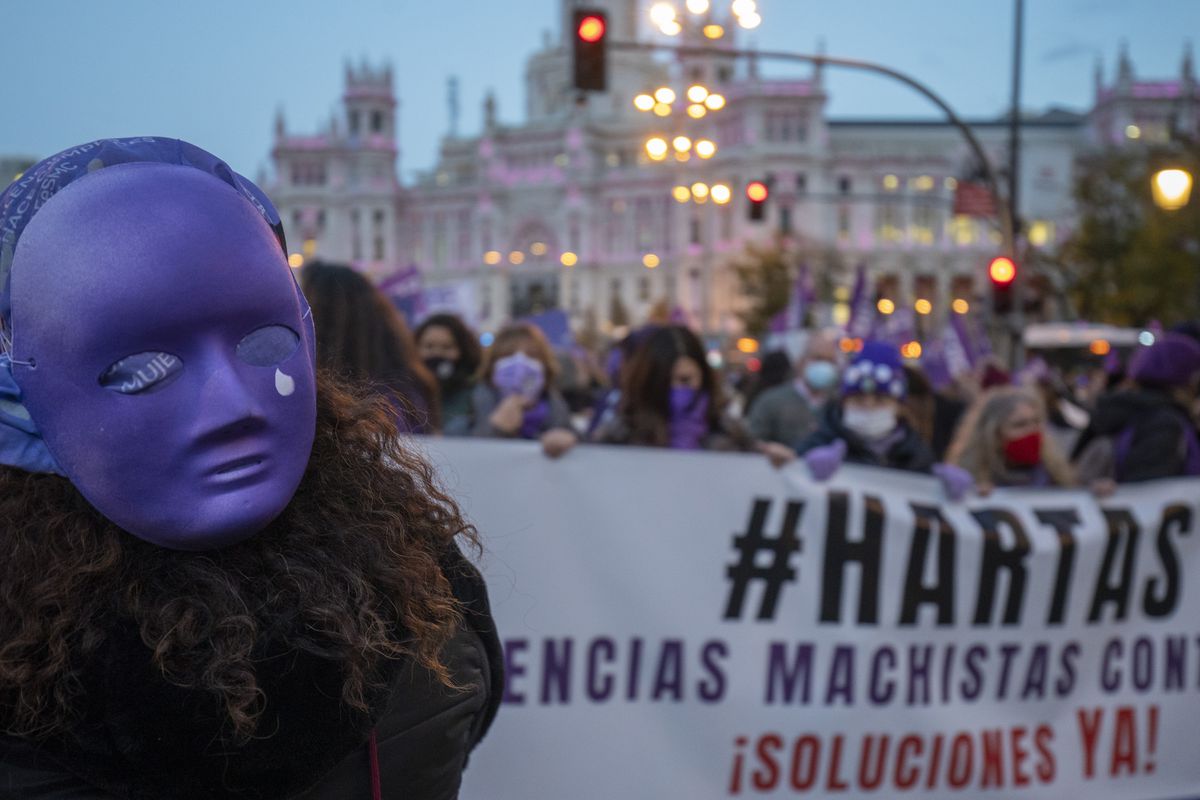 Women’s groups from across Spain took to the streets on Thursday to mark the International Day for the Elimination of Violence against Women, which is celebrated on November 25. While last year’s protests were limited by coronavirus-related restrictions, this year protesters were out in force, rallying to call for an end to gender-based violence.

The marches took place in several cities in Spain under slogans such as “We want to be alive”, “They are not dead, they have been murdered” and “Not one less”. The slogan chosen by the Spanish Ministry of Equality for the demonstration was “Together”.

In Madrid there were two separate demonstrations: one organized by the Feminist Movement of Madrid and a second by the 8M Assemblies of the Madrid region, whose name of the group refers to International Women’s Day, on March 8. .

In the first protest, women gathered in the streets of the Spanish capital to march from Plaza de Cibeles square to the iconic Puerta del Sol square. According to the estimates of the central government delegation in Madrid, around 1,200 people attended the demonstration. Protesters waved purple flags and drummed, chanting slogans such as “Without a putero [a man who frequently uses prostitutes] there is no trafficking ”and“ My stomach, my vagina cannot be bought or rented ”. These songs referred both to the future law on protection against sexual violence, known as the “Only Yes Means Yes” law, which will punish “non-coercive procuring” and classify surrogacy as gender violence. .

Elena de León Criado, president of the Madrid Federation of Women’s Associations, led the Madrid march, which carried a sign with the message: “We have had enough of violence against women. Solutions now! León Criado said the federation wanted Spain’s current law on gender-based violence to include forms of gender-based violence that occur outside of relationships – a measure that would bring Spain into line with the Istanbul Convention on Violence. with regard to women. These measures are included in the State Pact Against Gender-Based Violence, which was signed on Thursday by all Spanish political parties except the far-right Vox.

Henar Sastre, spokesperson for Plataforma 7N (a reference to a demonstration organized by groups of women who came to occupy the center of Madrid on November 7, 2015), who is part of the Madrid federation, declared that the objective of the demonstration Thursday was “to re-politicize the issue of violence.” We got used to 30 women being murdered a year, which has happened in the last 11 months, ”she said.

In the second act, the 8M Assemblies of Madrid organized around thirty small demonstrations in different districts of the region of Madrid. One of them was held in the Lavapiés district of the city of Madrid, with demonstrators El violador eres tú (or, You are the rapist) – a feminist song created in Chile by the women’s group Las Tesis. “We want to decentralize the feminist struggle and paint all streets and neighborhoods purple,” said Arantxa López, spokesperson for the Lavapiés 8M Commission, who called the group’s actions “complementary” to the main march.

“We are fed up with gender-based violence, patriarchal justice, this increase in sexual assault, rape of younger and younger girls, we are fed up with mistreatment and gender-based violence,” said Xelo Álvarez , the feminist coordinator. de Valence, who was one of the groups that organized the march. According to EL PAÍS estimates (neither the organizers nor the police provided official figures), around 5,000 people took part in the protest, including the vice-prime minister of Valencia and the delegate of the central government in the region. .

Other marches also took place in the towns of Seville, in the southern region of Andalusia; Bilbao and San Sebastián in the Spanish Basque Country; Valladolid in Castile and León; and Barcelona in Catalonia.

So far this year, 37 women in Spain have been killed by their partners or former partners, while 1,118 have been murdered since 2003, when official records began. Of this figure, 45 were under 21, according to a recent CGPJ report.

As a result of gender-based violence, 24 children have been orphaned this year and 330 since 2013. One of those orphans is Joshua Alonso Mateo, whose mother was killed by his father two years ago. Last Wednesday, he received a resilience award from the Ministry of Equality for his work in the fight against gender-based violence. Since 2013, 44 children have also been murdered by their father or their mother’s ex-spouse. This year, two little girls, aged six and one, were kidnapped and murdered by their father in the Canary Islands, Spain, in a case that shocked the country.

From January 1, Spain will also start counting murders of all women, whether they were killed by a partner or a former partner. This list, which will be parallel to the official assessment of victims of gender violence, will identify all women killed as a result of sexual violence, women who have been assaulted until their death in a family context and victims of so-called indirect violence, when children are hurt to inflict pain on the mother.