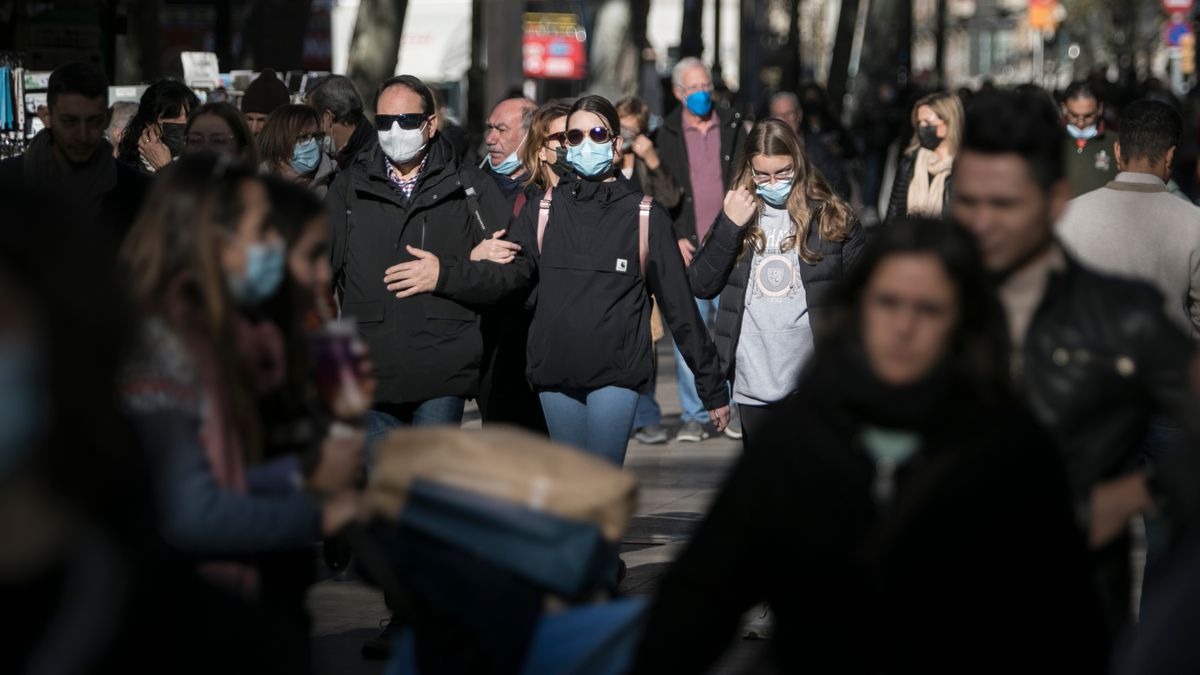 Omicron: Exterior masking in Spain: a measure against the coronavirus “more cosmetic than effective” | Society

The coronavirus continues to sweep through Spain, but all measures to combat the spread are still pending. A meeting held Wednesday between Prime Minister Pedro Sánchez and the country’s regional prime ministers aimed to “assess” new restrictions to stem this sixth wave of pandemic in the country. But few solid decisions have been made: the central government will once again mandate the use of masks outdoors and turn to military personnel to help with the ongoing vaccination campaign and the monitoring and research of positive cases and their contacts.

Experts warn that these measures are “insufficient” if the goal is to flatten the infection curve. Spain this week broke records for new coronavirus cases and reported 60,041 new infections on Wednesday – the highest figure since the start of the pandemic. In addition, according to the ministry report released last night, the incidence over 14 days currently stands at 784 cases per 100,000 inhabitants, or 78% more than a week ago.

Experts are asking for a roadmap to deal with the situation: common guidelines for the whole country according to the level of epidemiological alert, but with a place for the regions – which are in charge of their health systems, of the coronavirus vaccination rollout and restrictions – to change them as they see fit.

As for the return of masks in outdoor spaces, Mario Fontán, of the Spanish Society of Epidemiology, sums it up: “It is more a cosmetic measure than an effective measure to stop the virus.

Speaking after yesterday’s meeting, Pedro Sánchez, of the Socialist Party (PSOE), explained that the use of masks would be compulsory outdoors from December 24, with the exception of citizens in natural spaces or in the company of members of their family unit. They will also not be necessary if social distancing is respected.

“Experience has shown us that, along with vaccination, masks are fundamental to preventing infections,” he said. “It is important at a time of great affluence to implement the compulsory wearing of the mask,” he added, referring to the Christmas period. He stressed that the measures would be temporary and would be lifted “as soon as possible”.

The politician also announced that health centers will be able to hire retirees and professionals from overseas to bolster their workforce, and that temporary permits will be issued so that more brands of home antigen kits can be sold, for cope with the recent surge in demand. for coronavirus testing with the arrival of this new wave of the pandemic – thought to be driven by the more contagious omicron variant.

Sánchez also explained that the government would rely on the vaccination program to fight the pandemic. “We did not come back in March 2020,” he said, referring to the onset of the health crisis and the establishment of a general lockdown. “The situation is different and we are not going to go back to the measures of March 2020.”

This is a measure that can help make people aware that we are in a pandemic, but other than this education I see no benefit.

He said the vaccination campaign would be stepped up, including the administration of boosters, promising that 80% of those over 60 would have their third dose by the end of 2021, with 80% of the 50-59 boosted by January. 24, and 80% of the 40-49 group boosted by the first week of March.

For now, only Catalonia has announced the reintroduction of more severe measures, such as the return of a night curfew, the closure of night places and capacity limits in restaurants and cultural spaces from Friday. . These measures will have to be approved by the regional courts before being applied. The Catalan regional prime minister, Pere Aragonès, called for “measures which go much further than those announced” for all of Spain.

Basque Country Regional Prime Minister Iñigo Urkullu also called for tougher measures and warned that regions do not have sufficient powers to implement them. “This conference should foster the legal framework of measures that we can put in place,” he said of yesterday’s meeting, and called for limits on opening hours for the hotel sector and a capacity cap for social gatherings and sporting events. But so far, no other region has made the decision to announce more drastic measures.

Currently in Spain, face masks are mandatory in indoor public spaces and outdoors if there are crowds and social distancing cannot be respected. Making them compulsory in all external settings, as they were before during this health crisis, was a measure called for by a number of regions – including the Basque Country and the Canary Islands.

Sánchez is due to address the issue today at a Cabinet meeting and make them mandatory again via a decree before Christmas Eve. “Masks and vaccination are the answers with which we can escape this wave,” the prime minister said in public statements after the meeting last night.

However, for some time now, experts have been warning that the true value of wearing a mask is indoors, not outdoors, where the risk of contagion is much lower. The Madrid Public Health Association, for example, called for the measure to be lifted on April 6 this year. Their mandatory use outdoors was abolished on June 25 of this year.

Toni Trilla, head of epidemiology at Barcelona Hospital Clínic, warns that returning masks to the outdoors will not have a significant effect in containing the virus. “I do not understand the stubbornness in introducing this measure,” he said. “It is a superficial operation which, in addition, makes you lose credibility on the effectiveness of the measure,” he laments. “If I’m alone on the street or two meters from someone else, will I get infected?” No. Can masks on the street help reduce infections? Yes, but not at a level sufficient to justify the measure. Anyone who says it’s easier on people because you always wear it that way treats citizens like they’re children.

Magda Campins, head of epidemiology at Vall d’Hebron hospital, agrees. “This is a measure that can help make people aware that we are in a pandemic, but other than this education I see no benefit,” she adds. “Right now, we need drastic and robust measures. “

José Martínez Olmos, professor at the Andalusian School of Public Health, says bringing masks outside “won’t do anything”. He adds: “Most people already put them on when it’s crowded on the street. This will not solve the huge increase in cases. “

With such a high incidence in Spain, primary health care centers are on the verge of being overwhelmed and hospitals are also seeing increased pressure. According to the latest report, there are currently 7,732 Covid-19 patients, of which 1,466 are in intensive care units (ICUs). This is a 19% increase in admissions from last week, although far from the peak seen at the end of January of this year, during the third wave, when there were 30,000 coronavirus patients. and some 4,800 intensive care beds occupied.

The Ministry of Health also reported around 50 deaths from Covid-19 on Wednesday, compared to 77 on Tuesday. The total death toll since the start of the pandemic stands at 88,937. Experts warn that infections are likely to increase even more given the increased social mix that will take place during the Christmas holidays, and that the only way to stop this is to tighten the restrictions.

Experts also say that vaccination, while necessary, is insufficient on its own to flatten the infection curve. In Spain, 44% of those over 40 have already received a booster of a Covid-19 vaccine while 18% of children aged 5 to 11 – the latest age group to be included in the current campaign – have already received their first dose. Pfizer-BioNTech pediatric vaccine.

If no further action is taken, experts predict a “catastrophic” scenario in just a few weeks. “If we don’t take action, we could see the intensive care units submerged in just 10 days,” Campins warns. “The primary health care system is already overwhelmed.

The expert group that advises the Catalan regional government calculates that, based on current progress in the administration of booster injections and without further restrictions, there could soon be up to 50,000 infections per day in the region – not far from here. number reported across Spain on Wednesday.

“We have already had to delay elective surgeries in some hospitals,” Campins explains. “If drastic measures are not taken, we will soon stop more interventions and transplants and there will be a significant ripple effect for non-Covid pathologies. We cannot allow that to happen.

2021-12-23
Previous Post: Mexico, Panama and Spain are on the international short list of feature films
Next Post: Funding led by Proptech in Spain in 2021: an exceptional year full of milestones