Do people travel to specific destinations in search of a good meal? After all, golfers are known for putting Scotland on their to-do list, skiers flock to the Alps, and wine lovers can endlessly debate the virtues of French versus Italian wines. Can lunch inspire the same level of wanderlust?

In the case of Valencia, Spainthe answer is an unequivocal yes, especially for travelers who want to try paella in the Spanish city where it was born.

That was certainly my aim when I sampled the dish at various venues around town, where the paella usually arrived at our table with great fanfare in giant, sizzling platters.

“We pride ourselves on having delicious gastronomy,” said Maximo Caletrio, Visit Valencia Market Manager for Canada and the United States.

“Visitors must make a stop at Mercat Central de Valencia, as the building itself is marvelous with its colorful glassware and it contains must-try ingredients and dishes.”

But despite the glories of Valencian cuisine, it was the city itself that impressed me the most, with its mix of ancient and ultra-modern architecture, museums and galleries, and an inviting location on the Mediterranean.

The Oceanografic, located in the City of Arts and Sciences complex in the city of Valencia, is the largest aquarium in Europe. Photo credit: Courtesy of Visit Valencia

This year, Valencia has been designated World Design Capital 2022and a look at the City of Arts and Sciences (CAC), a collection of futuristic buildings designed by acclaimed and sometimes controversial Spanish architect Santiago Calatrava, and visitors will immediately understand why.

Imagine a series of rounded structures – calling them “buildings” doesn’t quite do them justice – on an old riverbed and reflecting in the water, and you start to get the idea.

The CAC includes three main attractions: the Oceanografic, the largest aquarium in Europe, which offers a daily exhibition at the dolphinarium; the Hemisferic, a 3D cinema with documentary films, including screenings for families with children; and the Science Museum, an interactive venue that also includes a restaurant and workshops.

In stark contrast to the CAC, Valencia also lays claim to three Unesco World Heritage designations that honor its 2,000-year-old past: La Lonja de la Seda, a monument considered a masterpiece of Gothic art which was originally used for the silk trade in the 15th century; the Water Court, a 1,000-year-old court system that remains a visible symbol of authority in settling irrigation disputes; and, perhaps most interesting for visitors, the annual Fallas Festival which honors Saint Joseph, the city’s patron saint. The celebration, which kicked off this year in February and will run until March 19, includes light shows, fireworks and parades.

For me, nothing says Spanish art like ceramics, and National Museum of Ceramics Gonzalez Martihoused in the ornate palace of the Marquis de Dos Aguas in the old town, offers an extensive collection of ceramics spanning the centuries.

Valencia is also a seaside town. There are 75 miles of beaches in all, the most famous of which, The Malvarrosaoffers lounge chairs under rustic umbrellas, restrooms, snacks and easy access for visitors with reduced mobility. 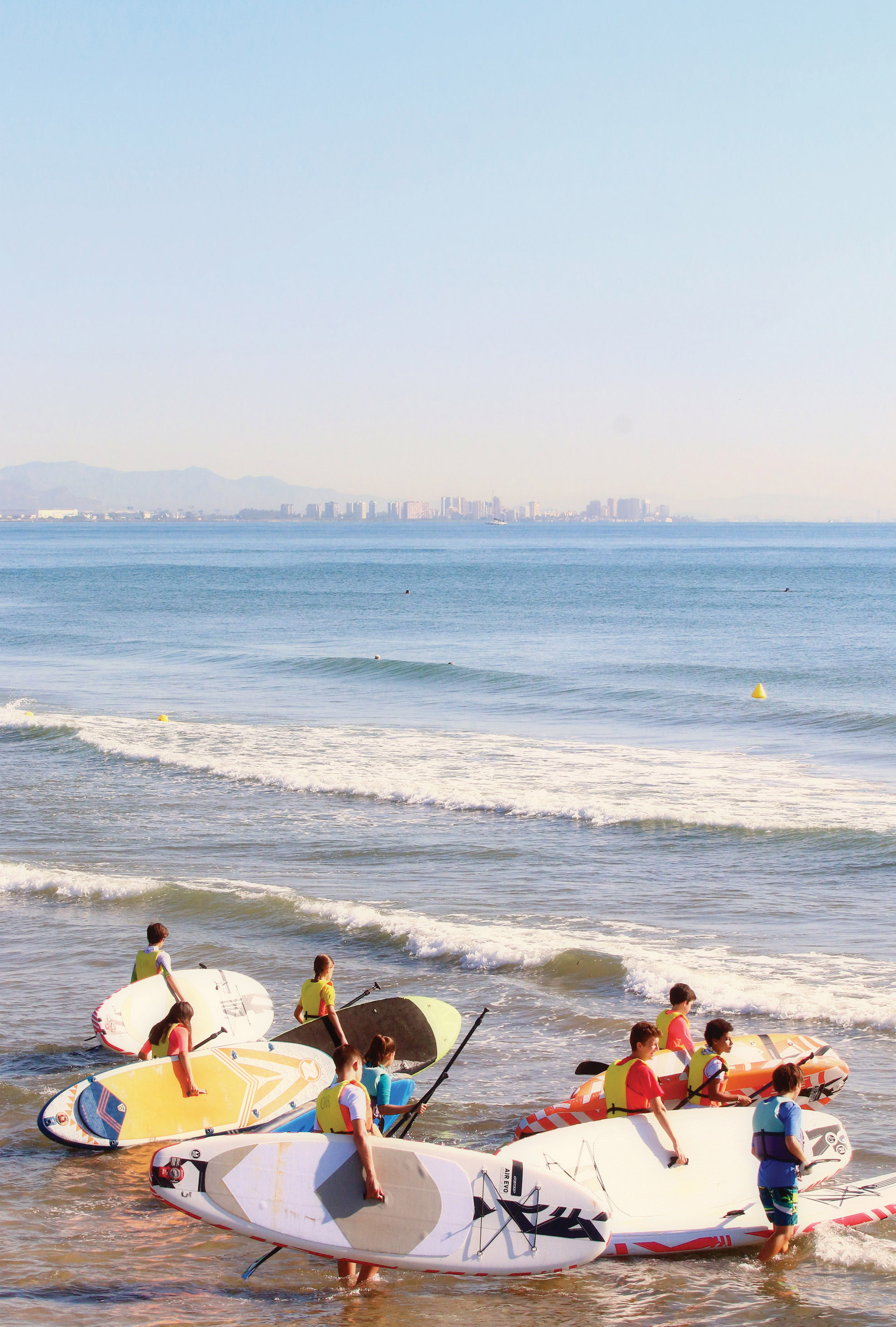 Paddleboarders in Valencia, which has 75 miles of beaches. Photo credit: Courtesy of Visit Valencia/Pablo Casino

The beach also offers designated fitness and activity areas, including paddleboarding, surfing, boating, and diving.
Cycling enthusiasts can explore the area along bike paths that stretch for almost 100 miles or take a tour Albufera National Park. There’s even a 48-mile circular route, Vuelta a l’Albufera, for visitors with time and energy to spare.

Valencia is also big on green tourism and is the premier destination to be certified by Aenoran agency that promotes sustainability, to verify the carbon footprint of its tourism activity.

the Ricard Camarena Restaurantfor example, located in the heart of Valencia, has been awarded a Michelin green star for its commitment to the environment.

This year, Valencia has been named European Capital of Smart Tourism 2022, which Caletrio says is “an acknowledgment of our commitment to developing projects that promote smart tourism, including increasing pedestrian accessibility, technology to enhance the tourist experience and the effort to preserve cultural heritage.”

“Our goal is to provide visitors with a seamless experience when visiting Valencia by giving them access to information and communication technologies [ICT tools] that help travelers navigate our city. An example would be our audio guide which allows visitors to listen to a tour guide while exploring the city on their own.”

Valencia also prides itself on being a welcoming destination, including for the LGBTQ community.

“We are proud to announce that Valencia has been named host city for the 2026 edition of the Gay Games,” Caletrio said, touting the city’s efforts to amplify the normalization of diversity and inclusion. He noted that the competitions are open to everyone, regardless of sexual orientation, race or ethnicity, disability or religion.

As for accommodation, Caletrio quoted the five stars only you hotel which has just opened in Valencia. The luxury property offers upscale amenities and three restaurants, including the paella-focused El Mirador de Only You restaurant, which has panoramic views, and Salvaje, which serves Asian fusion cuisine.

Valencia is one of the regions in Spain that accepts the EU Covid digital certificate, although as with all European travel potential visitors are encouraged to keep up to date with changing protocols.