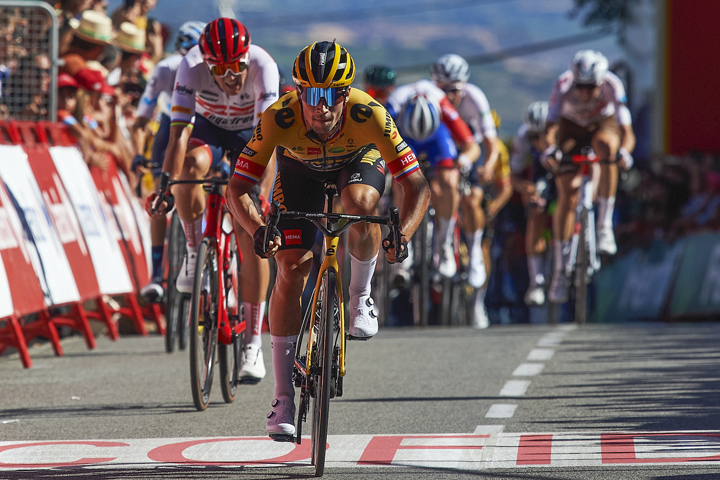 Primoz Roglic takes the lead as Vuelta return to Spain

LAGUARDIA, Spain—The Spanish Vuelta was back in Spain. And defending champion Primoz Roglic was back in the lead.

Roglic showed he was in great shape and in a position to retain his Vuelta title with a dominating stage four victory on Tuesday as the Grand Tour race returned to Spanish territory after three opening stages in the Netherlands .

Bidding for an unprecedented fourth consecutive Vuelta title, Roglic took the leader’s red jersey after launching his attack in the final meters of the climb to Laguardia in the Basque Country.

The Jumbo-Visma driver widened a gap of 13 seconds in the general classification with his American teammate Sepp Kuss. Roglic was 26 seconds ahead of Ethan Hayter of Ineos Grenadiers.

“It’s really only the start of La Vuelta but it’s always better to be 10 seconds ahead rather than behind,” said Roglic. “It was already a tough pace all day, with a super fast and hard stage. The final was the opportunity to fight for the stage victory. I had the legs so I tried.

The Slovenian crossed the line ahead of Trek-Segafredo’s Mads Pedersen and Movistar’s Enric Mas. It was the third straight runner-up finish for Pedersen, who was beaten by Sam Bennett in the second and third stages.

Roglic took his 10th overall Vuelta stage victory. His preparation for this edition has not been ideal – due to injuries suffered during a fall in the Tour de France – and his participation confirmed only a few days before the start of the race.

The first three stages had taken place in the Netherlands for the first time after plans to start there in 2020 were hampered by the coronavirus pandemic.

The riders will tackle five mountain passes in Wednesday’s fifth stage which ends in Bilbao.