It was back to work for Queen Letizia this morning after returning from her state visit to Austria.

The Spanish queen, 49, donned a stylish outfit to attend a meeting at UNICEF Spain headquarters in Madrid, recycling a Hugo Boss tweed jacket she first wore in 2018 under a coat black winter jacket, which she paired with skinny black pants.

Armed with a folder overflowing with documents, the mother of two, who is the honorary president of the Spanish branch of UNICEF, seemed ready to do business.

Queen Letizia of Spain, 49, traveled to Madrid today for a meeting at UNICEF Spain headquarters. The mother-of-two looked stylish in tailored pants and a black coat. She also recycled a Hugo Boss tweed jacket she first wore in 2018 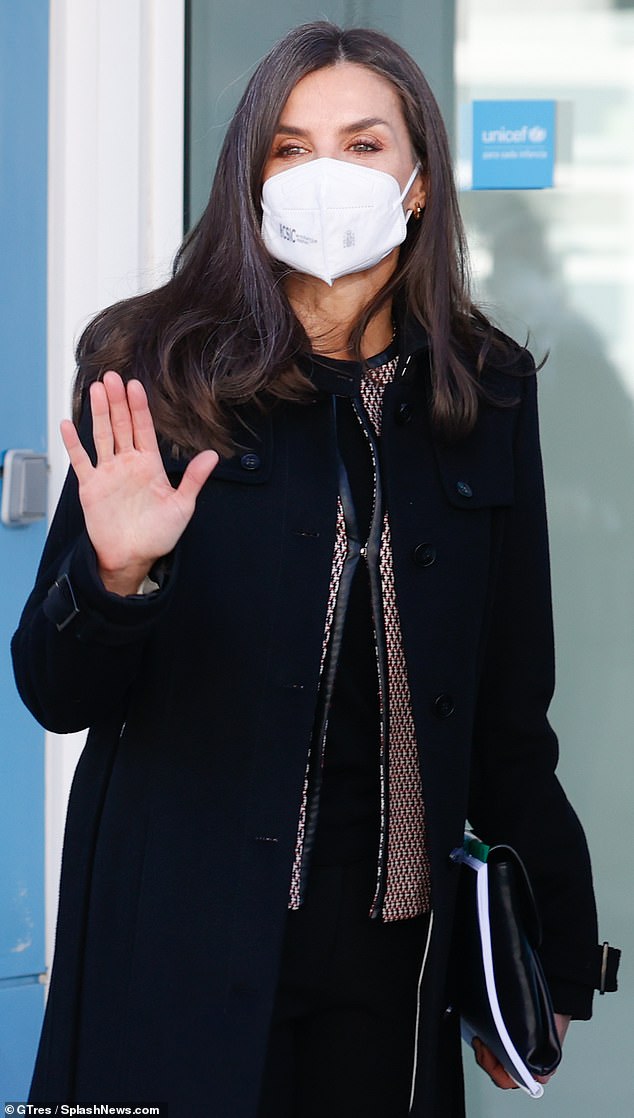 Eagle-eyed fans noticed the royal wearing a pair of gold hoop earrings which is also adored by her daughter, Princess Leonor

Letizia, who was still in Austria with King Felipe VI on Monday, looked relaxed as she resumed her solo duties in Madrid today.

The royal has donned lots of dresses and skirts for her recent engagements, but today she looked very stylish in skinny pants that flattered her petite waist.

Under its winter coat, the Hugo Boss jacket added a touch of color to the sober outfit.

Letizia looked ready for business, armed with killer black heels and a folder filled to the brim with documents ahead of her meeting 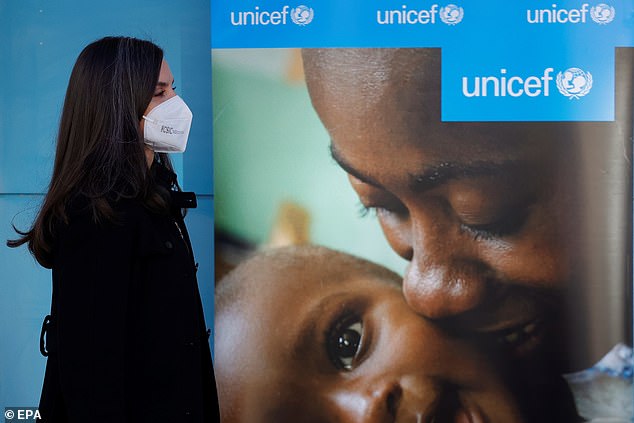 Letizia, wjo is the honorary president of UNICEF Spain, wore her straight brown locks and smoky eye for the meeting today 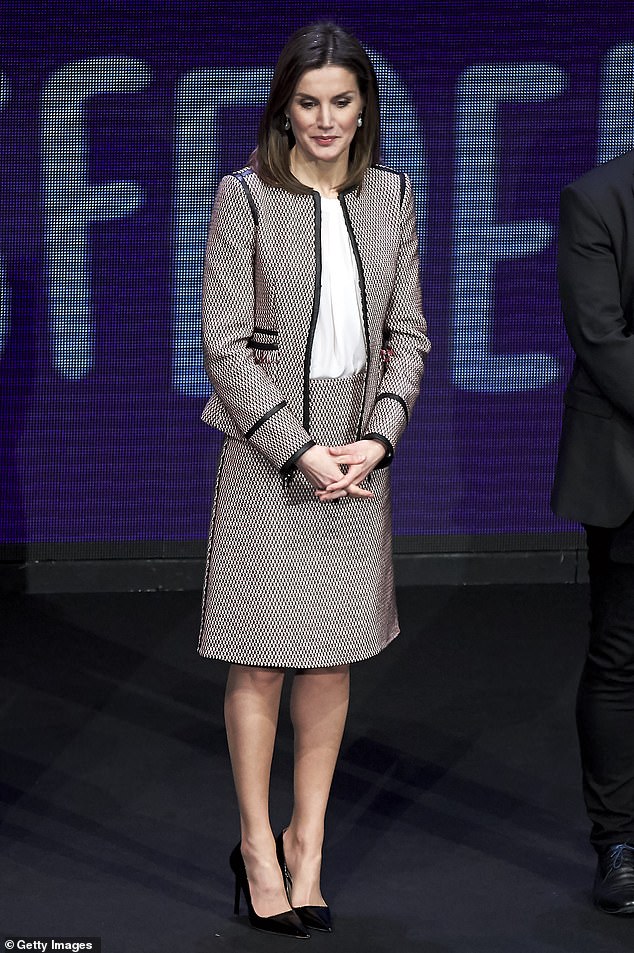 Letitiza debuted the jacket with a matching skirt for Rare Disease Day in Madrid in 2018, pictured

The royal kept the look low key by sporting very little jewelry except for a pair of gold hoop earrings which are also a favorite of her 15-year-old daughter Princess Leonor.

Leonor wore the exact same pair at the Princess of Asturias awards in October.

She also carried a leather pouch for her belongings.

While wearing a face mask in accordance with Spain’s coronavirus guidelines, the elegant royal still wore a touch of make-up for her engagement.

She donned her signature smoky eye with black eyeliner and bronze eyeshadow that complimented the hints of hazel in her eyes.

A touch of bronzer accentuated her good looks as she braved the Spanish winter. 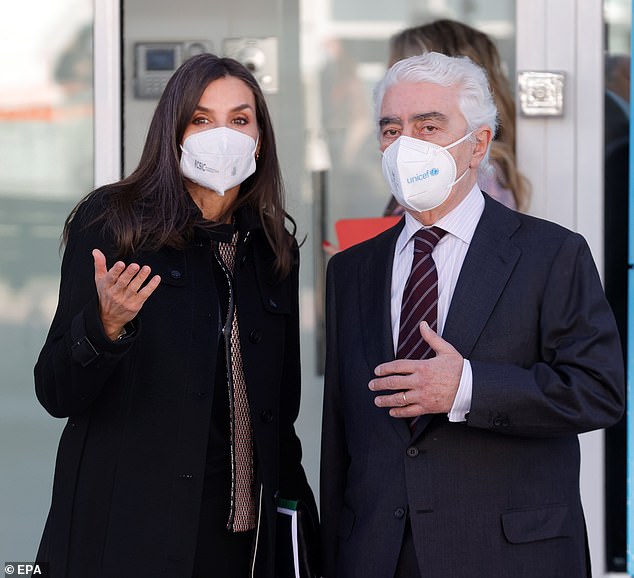 She was welcomed by the President of the Patronage of UNICEF Spain, Gustavo Suarez Pertierra 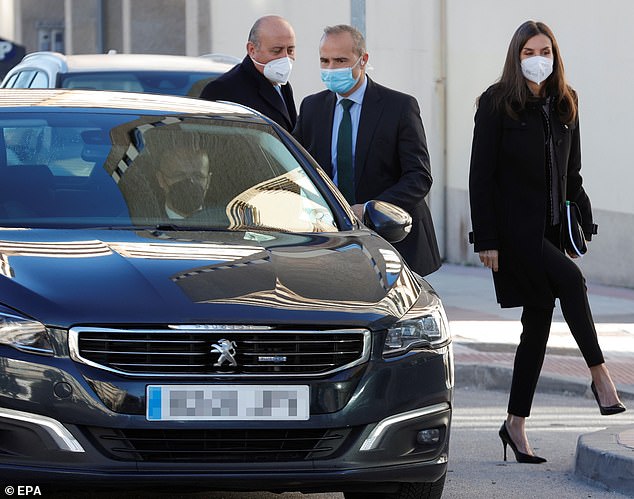 Prioritizing safety with a face covering, Letizia did her best when she arrived this morning

Her brunette locks were styled in a straight blow-dry that bounced off her shoulder as she strutted her way to the meeting.

Letizia was welcomed by the president of UNICEF Spain Patronage, Gustavo Suarez Pertierra before their meeting.

The mother-of-two, who is the honorary president of the organization’s Spanish branch, seemed eager to begin her work.

Today’s meeting aims to reflect on what UNICEF Spain has achieved in 2021 and address the challenges disadvantaged children will face this year. 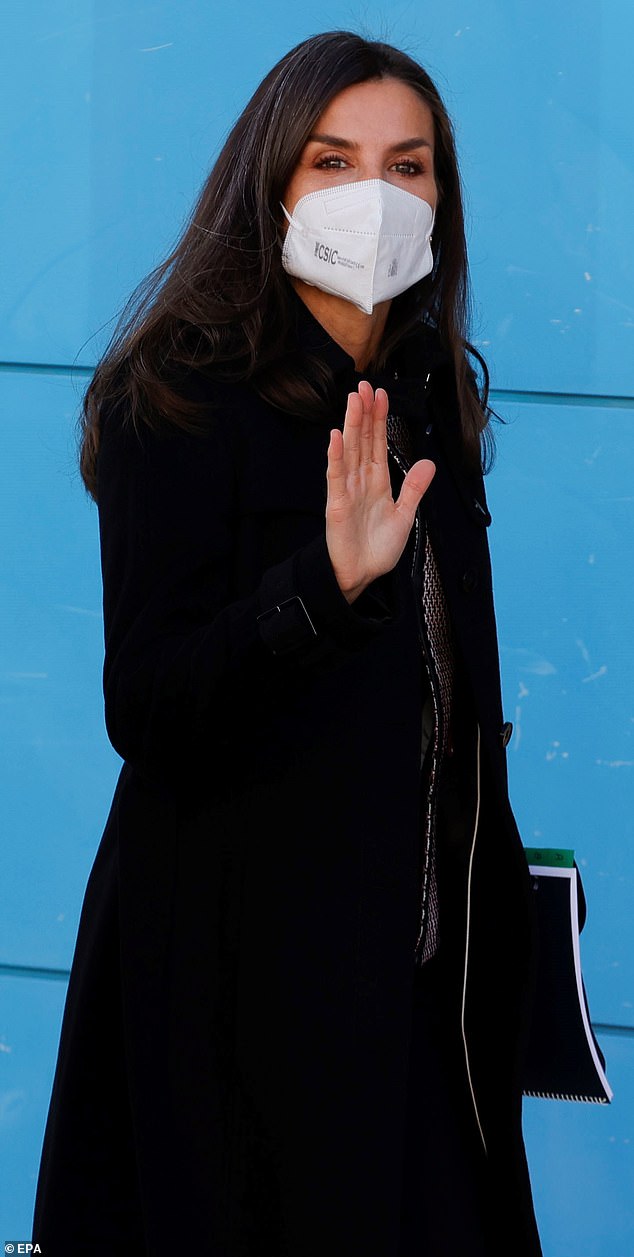 Letizia warmly greeted royal fans on her way to her meeting. She has just returned from Austria 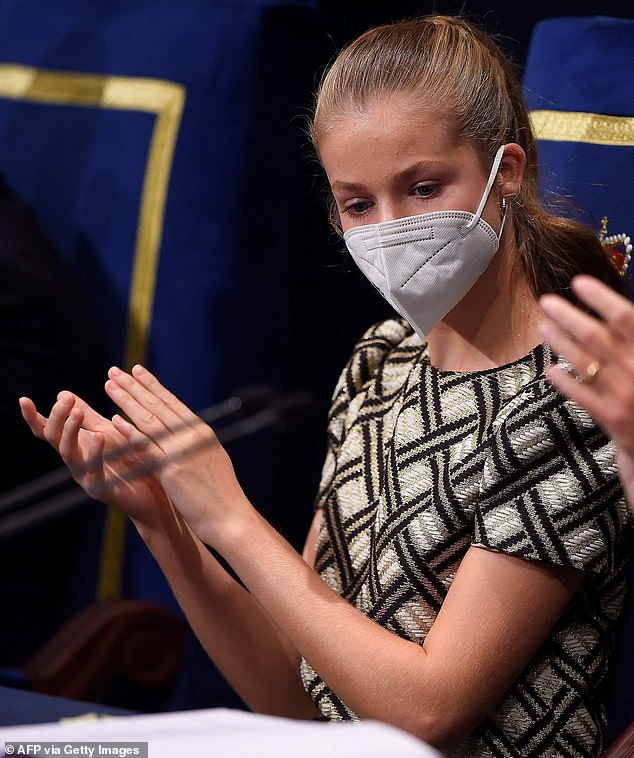 On Monday, Letizia and Felipe were still in Vienna, where they traveled over the weekend for a fleeting state visit.

The Spanish monarch, who spent a decade working as a television journalist before marrying Felipe in 2004, and her husband appeared in high spirits as they attended the opening of the ‘Dalí-Freud’ exhibition at the Belvedere Museum in Vienna.

Typically polished, Letizia opted for a black and white check dress for the occasion, which she paired with black heels and a matching clutch.

Putting safety first, Letizia donned a plain white mask throughout the outing and teamed her chic look with a pair of sparkly earrings.

The visit marked the first visit by Spanish monarchs to the Austrian capital since 2007, and it was King Felipe’s first official visit.

The couple proceeded to the official inauguration of an exhibition on Dalí and Freud at the Belvedere, open to the public since Friday.

According to the gallery’s website, the exhibition “will illustrate the obsession with the psychoanalytic in the work of the surrealists, particularly as it is present in the surrealist pictorial universe of Dalí”.