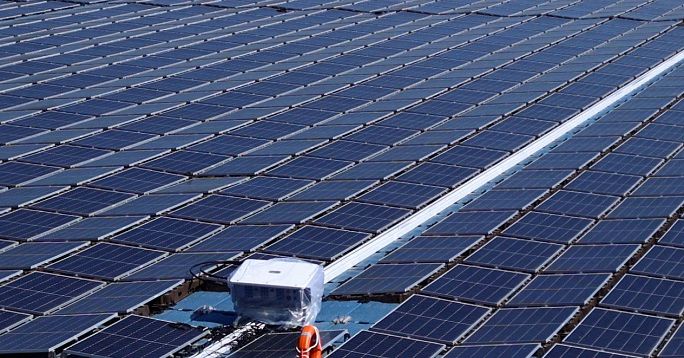 EDPR offered a negative price of 4.13 euros/MWh ($4.50/MWh) for 70 MW of floating solar power on its giant Alqueva hydroelectric dam combined with 14 MW of additional solar capacity and 70 MW of wind power.

The record price was achieved thanks to the scale and combination of technologies, a spokesman for EDPR, a subsidiary of Portuguese utility EDP, told Reuters Events. Going online in 2025, Alqueva will be the largest floating solar power plant in Europe and will win market prices for other solar and wind components to compensate for the negative floating solar price.

The Spanish government is about to launch its floating solar market by rolling out new regulations for projects on public aquatic spaces. The first projects are likely to be deployed on hydroelectric dams, allowing developers to acquire scalable and operational learnings that could be applied to other water bodies such as wastewater treatment plants and disused mines.

Asia is currently the largest floating solar market, but business is growing in Europe and the US holds huge potential. Floating solar power on man-made bodies of water could eventually provide 10% of electricity generation in the United States, the US National Renewable Energy Laboratory (NREL) said in a report.

Endesa’s Alto Rabagao project includes 49 MW of battery storage and 48 MW of wind energy and will offer a load factor of “over 40%, well above the typical load factor” of solar or wind projects, said the spokesperson.

The contracts awarded at the auction apply to the first 15 years of floating solar generation and the energy produced by the other technologies can be sold at the daily market price on the Portuguese MIBEL market. The average day-ahead MIBEL price in 2021 was 112 euros/MWh.

Portugal has also simplified the bidding process by granting both grid connection and water surface rights for 30 years, Endesa noted, removing licensing hurdles that are delaying many projects. solar and wind power in the United States and Europe.

EDP ​​was an early player in floating solar power, seeking to take advantage of growing solar and wind expertise and its large fleet of hydropower capacity.

The company benefits from significant technology learnings, a test floating solar project completed at Alto Rabagao in 2017 and 5MW capacity at Alqueva expected to come online in July.

Changing water conditions on large hydroelectric dams pose design challenges and developers like EDP have worked with engineering groups to develop special mooring and anchoring systems that can adapt to changes in water depth and temperature.

Spain has about 100 state-owned reservoirs, including hydroelectric dams and non-hydroelectric facilities, and is analyzing responses to the proposed floating solar regulations following a public consultation in April. Spain installed 3.3 GW of solar capacity in 2021 and aims to build 30 GW of new solar by the end of the decade.

The Spanish government is keen to back floating solar because it offers greater energy efficiency through the cooling effects of water and less dust accumulation than land-based projects, an energy ministry spokesperson has said. and environment MITECO.

Spain is expected to offer 25-year concessions for floating solar projects and developers will be required to provide grid connection permits in project proposals, favoring hydroelectric dams over water sites without grid capacity.

MITECO plans to implement the new rules as soon as possible, but developers are still waiting for a clear auction schedule.

Floating solar is still an emerging technology and therefore “one must proceed with caution”, the ministry spokesperson said.

The opinions expressed are those of the author. They do not reflect the views of Reuters News, which is committed to integrity, independence and non-partisanship by principles of trust. Reuters Events, part of Reuters Professional, is owned by Thomson Reuters and operates independently of Reuters News.