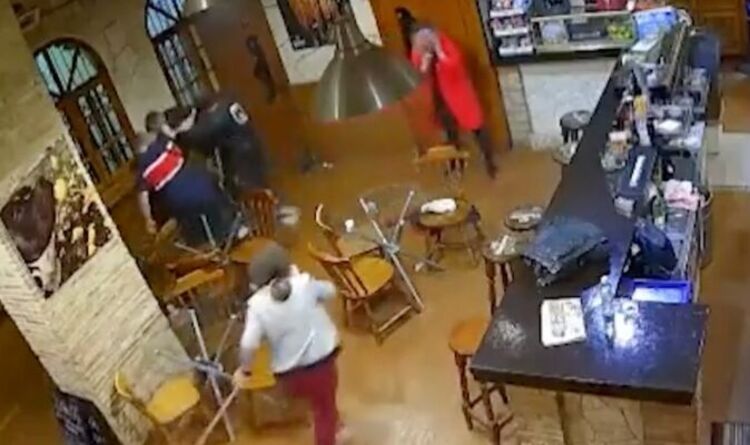 The incident was captured by security cameras and happened last Sunday in Torrevieja in the province of Alicante. In the video footage, three men are seen entering the Tentaciones bar around 11:30 p.m. When they try to order drinks, the pub owner tells them that the last orders have already taken place.

The men insist that they want to be served and the bartender then steps in for his boss, telling them again that the bar is closed.

The Russians then ask the bartender where he is from, to which he replies: “I am Ukrainian. Ukrainian Glory”.

At that moment, the Russians let go of the 43-year-old Ukrainian, punching and kicking him.

Two women attempt to stop the fight and separate the brawling men but to no avail.

Other patrons exit the pub as quickly as they can, horrified by what they have witnessed.

The bartender is eventually pushed to the floor, where he continues to be beaten badly.

The Russians eventually walk out of the bar, having left the Ukrainian in a semi-conscious state.

The bartender, who has lived in the city for 23 years, reportedly suffered a broken nose and bruises, according to a medical report.

The incident was reported to the Guardia Civil, the national police, who subsequently opened an investigation.

The Russians have been identified as two brothers known for violent behavior and both reportedly have criminal records.

Members of the ‘Ukrainians Heart to Heart’ association in Torrevieja called the incident “barbaric”, saying it was “by some miracle they didn’t kill him”.

READ MORE: Is the EU allowing Russia to evade sanctions?

On Sunday, Russian forces in Ukraine stepped up their bombardment of towns across the country.

Other cities targeted by the new wave of attacks included the northern city of Kharkiv, as well as kyiv and the southern city of Mykolaiv, near Odessa.

The command of the Ukrainian armed forces says it sees signs that Moscow is starting its new offensive in the East.

The Kremlin has concentrated its forces in the east over the past week as it seeks to establish complete control of the Donetsk and Luhansk regions.

2022-04-19
Previous Post: Rosalia will cover Spain, Europe, the United States and Latin America on the ‘Motomami World Tour’
Next Post: Catalans hacked to launch a legal offer on the use of spyware