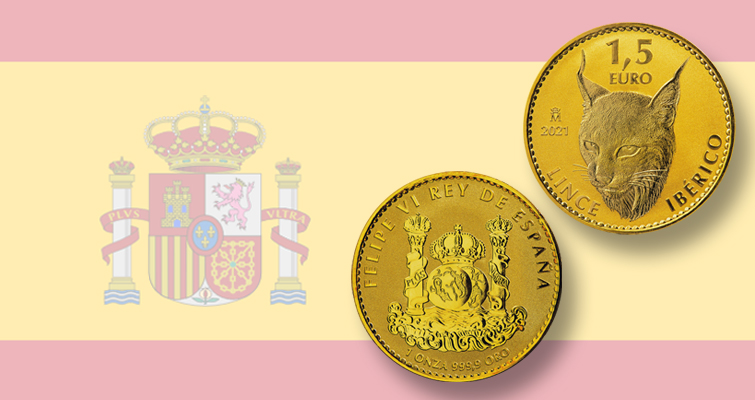 Spain, the source of so many numismatic treasures in the past, has joined the list of nations issuing their own gold coins.

The 1 ounce .999 Reverse Proof fine gold coin is denominated € 1.5, an unusually low value for a bullion gold coin from around the world.

The reverse represents the head of an Iberian lynx. In addition, the face value (1.5 €) appears, with the year issue date (2021) and the crowned symbol of the Spanish Mint.

The obverse of the coin features images borrowed from the famous Spanish silver coin “coin of eight”, which circulated around the world for more than two centuries.

The 2021 coin adopts the design of the Pillars of Hercules which represents the meeting of the two hemispheres, with two globes crowned on the seas, and the legend PLVS VLTRA appearing on ribbons mounted on opposite pillars.

The legends identify the current monarch of Spain, Felipe VI, as well as the weight and delicacy of the coin.

The coin weighs 31.21 grams and measures 37 millimeters in diameter. The inaugural issue has an edition limit of 12,000 pieces, each delivered encapsulated.

The coin, with the continuous Lynx pattern, is to be sold through distributors around the world, according to the Spanish Mint.