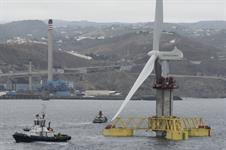 Spain’s central government has adopted its national roadmap for offshore wind energy, approving a target of 1GW-3GW for installed capacity by 2030

Floating offshore wind would likely make up the majority of this build. Spain does not currently have any offshore wind farms on a commercial scale.

The roadmap also defines a public support program of 200 million euros for offshore research and development (R&D), prototypes and pilots until the end of 2023.

Although seemingly a modest ambition for a country with over 28 GW of onshore wind power, the 124-page roadmap focuses almost exclusively on the burgeoning market for floating wind technologies, making deep water a virtue. extremes of Spain near its 7,600 km of coastline.

The stated objective of the roadmap is to make Spain “a European base and a benchmark for R&D, design and demonstration” for floating wind technologies, “offering the best environment to test new prototypes” .

The document recognizes the Canary Islands as the springboard for floating technology, through this regional government‘s Plocan program – a platform 23 km offshore, where it plans to install 300 MW of wind capacity from here. 2025, most floating.

The document also outlines three other areas: the east coast, the southern tip on either side of Gibraltar and the northern coast of Galicia, where the global offshore wind major Iberdrola is developing a 980 MW floating project.

Although positive, the response from the national wind association AEE has not been encouraging, mainly because the details of the roadmap regarding specific development regulations and compensation mechanisms remain to be defined.

“Given a seven-year development schedule for offshore”, AEE requests that the announcement of specific offshore regulations be brought forward to mid-2022 – from 2023 as indicated in the roadmap – in order to reach the higher target than 2030.

Meanwhile, the document makes a serious nod to electricity auctions as its only mention of compensation mechanisms, highlighting how recent auctions have driven European offshore electricity prices below € 50 / MWh. , compared to more than € 200 / MWh in 2015.

Other related pending measures include the planning of power lines and regulation of interconnections – expected in 2023 – as well as a related maritime zoning plan, currently in public consultation, integrating floating wind platforms with fishing activities and at maritime observatories.

Once everything is in place, AEE expects a swift response from a domestic industry that not only covers the entire onshore wind energy supply chain but which it says has also “equipped 11 of the 13 floating wind facilities. in the world”.