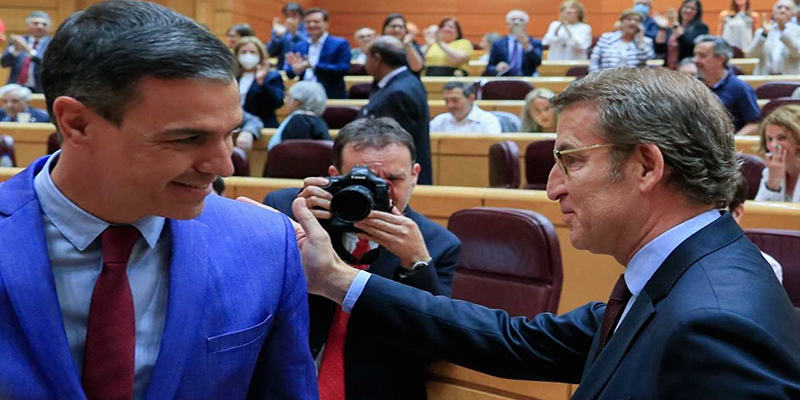 Spain in the electoral storm: my kingdom for a horse

Fernando González Urbaneja | I do not want to assign the role of Richard III in the Spanish political drama, but the main contenders, Pedro Sánchez and Alberto Nuñez Feijóo, although with different intensity, are condemned to opt for whatever it takes to succeed and fail, like Richard III. The recent debate (fight) in the Senate between the two politicians who claim to praise La Moncloa showed the desperation, the obsession, the determination to get ahead of their opponent in the next electoral election. Whatever it takes.

There is a consensus on the seriousness of the current economic, political and social crisis. A national but also global crisis. A crisis that requires concentration, consensus, determination and talent to face it. It does not seem that the Prime Minister, and leader of the Socialist Party, has the management of the crisis at the forefront of his concerns. In view of his speech in the Senate and his instructions to his deputies a few days later, Pedro Sánchez’s priority is to destroy his adversary, to disqualify Núñez Feijóo as an incompetent and malicious politician, promoted to the head by dark powers.

Núñez Feijóo’s response was between reflection and astonishment. However, true to character, he enters his opponent’s dialectical game with fewer bad intentions, but with clumsiness and an inability to alter the script of the rowdy brawl his opponent challenges him to. The session was the closest thing to a humble spectacle, not at all worthy of a political debate in difficult times. And the woolly and sheepish applause of the senators and deputies present in the hemicycle were enough to darken the picture further.

Politics has slid in many of the so-called democratic countries into polarization and confrontation driven and capitalized by the extremes. They don’t fit the ideological map of the population, but they do because they excite the media who assume that polarization is good for audiences.

THREE CHALLENGES
The government faces three challenges by which it will be weighed and measured, sooner or later. These challenges are called: inflation, the energy crisis and the management of European funds. The three intertwine, forming a virtuous circle of success or vice versa.
With regard to inflation, which is not just a Spanish problem, the diagnosis is deficient and measures are slow to be taken. Beyond the effectiveness of the ECB’s monetary policy, which, as the Fed Chairman warns, will initially be painful, it is up to the government to explain and apply economic and budgetary policy measures. and to persuade public opinion to avoid an inflationary spiral.

The first signs in this direction are neither encouraging nor even hopeful. The attempt at price controls (price caps on basic foodstuffs) is in the worst possible textbook. This may be commonly accepted as it sounds good, but has been found to be counterproductive. The photo of the proposing minister with the head of one of the big supermarkets (evil capitalists) is somewhere between comical and pathetic.

The government is very satisfied with its energy management, claiming that it is the first reference of what Europe offers, but this is a hypothesis that is as theoretical as it is voluntary. The Iberian exception is not consistent with this claim to leadership; Spain’s chronic energy dependence doesn’t help either, and confrontation with the energy industry doesn’t equate to leadership either. But the government sells its wares well in order to gain editorial support.
Long-term solutions to the energy crisis are within reach, requiring significant investment and effective complicity. But in the short term, this requires recognizing the costs of transition, which is to assimilate the real costs (eg gas) and pass them on fairly to consumers.

Finally, there is the challenge of managing European funds, a blessing in disguise to face the crisis and build a stronger and less dependent Europe. If the previous round of European aid improved Spain’s physical infrastructure, this second round should serve to improve productivity, if the seeding is good.

A year after the start of the arrival of the funds, little information is available on their implementation. The government has opted for the “Juan Palomo” (I’ll take care of it, I’ll eat it) strategy, overestimating the capacity of the official bureaucracy to manage and allocate these funds. Once this first phase is over, the government will probably be able to say that it has managed these funds well and that their distribution is correct and is bearing the expected fruits. But there are also reasons to imagine a mediocre result, like the management of European aid over the last decade, which shows a deficient percentage in the use of these resources.

A VERY BABY GOVERNMENT
The argument of the government, which is at the center of its electoral platform and which it repeats over and over, offers an astonishing presumption: it does everything well and the results are excellent. Sánchez is equivalent to a miracle. They don’t pay attention to the saying “tell me what you brag about and I’ll tell you what you miss”. It boasts the biggest economic recovery in Europe, but is one of the laggards when it comes to reaching pre-pandemic per capita income. It boasts of labor reform that has halted the precariousness of work, but precariousness rates in the public sector and national unemployment are still the highest in Europe. There are regulatory changes, but with nominative cosmetics. It boasts of an exercise in deliberative and consensual democracy, but records an overwhelming statistic in the use of executive orders and sloppy legislative practice (long, rectified, confusing and unenforceable rules) unworthy of competent and prudent politicians.

A weak government that has made a virtue of necessity by paying other groups whatever they ask to pass laws. And then accusing the opposition of being irresponsible and insidious for not having approved all the government’s proposals. In reality, the opposition voted for more than half of the proposals, but the framework set by the government is that of a militant NO to everything. The opposition failed to overturn this hostile and hostile image, due to strategic and communicative deficiencies.

Exhausting Electoral Calendar
It is understandable that parties and politicians live in a permanent electoral campaign, but with varying intensity. Today, the campaign is constantly tense, everything takes place in electoral terms, which must be exhausting for these politicians, but unbearable for the citizens. This explains why a majority of respondents approve of the government’s measures. Only for a good part of them to deny their intention to vote for them.

The mandatory electoral calendar has two milestones: next May, municipal and regional elections in half of the municipalities. December, legislative elections. In between, there are snap elections in Valencia and Catalonia. A tense, intense calendar that requires prior decisions to nominate candidates and overcome internal crises in parties and coalitions.
A calendar that leaves economic policy and measures to combat the crisis in the background; which does not assume the risk of a possible recession if expectations do not change. The dominant vector is tragic, my kingdom for a horse; whatever it takes for a vote, whatever it takes for the competitor’s destruction.