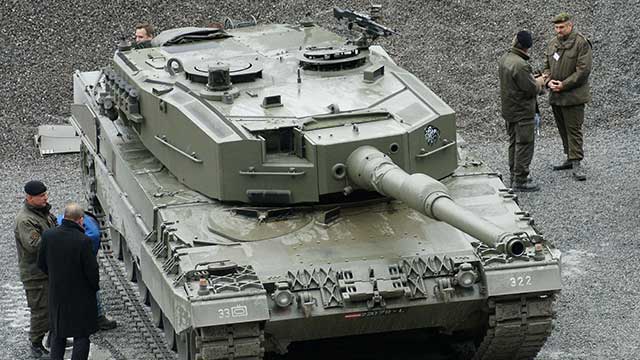 MADRID ($1 = €1.00) — The Spanish government is preparing to donate to Ukraine 10 Leopard 2A4 main battle tanks and 20 M113 armored personnel carriers, which are part of the inventory of the Spanish army. The donation is military aid from Madrid to Kyiv due to the invasion of Russian troops into Ukrainian territory, which sparked a war between the two countries.

According to the Spanish online portal InfoDifensa, the operation to transfer this military equipment to Kyiv was designed in a triangle. After the Leopard 2A4 and M113 become Ukrainian property, the Zelenskyi government will finance their update and modernization on Spanish soil with money from the European Union’s European Peace Fund. For this purpose it will be necessary to conclude a contract with Spanish companies. The final phase will be the transfer to the theater of operations.

A team of Ukrainian experts have traveled to Spain over the past two weeks to monitor the state of the equipment and will be responsible for determining the level of ambition to update and modernize the systems, which is not not yet closed, according to Spanish sources. According to Spanish sources, the weapon systems that will be transferred to Ukraine are unused, stored and inactive.

Regarding the scale of the program in financial and time terms, it is premature to specify, the sources added, but the complete operation could represent at least between five and fifteen million euros, and the delivery time could last up to ‘at the end of this year, depending on the ambition of the configuration and the difficulty of finding the necessary spare parts and systems for the two military vehicles.

BulgarianMilitary.com recalls that Spain keeps a total of 53 models of Leopard 2A4 tanks at its military base in Casetas, near Zaragoza. 55 tons, a powerful Rheinmetall L/44 120 mm cannon and two 7.62 mm MG3 machine guns, it is a very effective battle tank.

Ukraine’s Ambassador to Spain, Igor Zovkva, has called – privately and publicly – for greater Spanish involvement in sending offensive military aid, and as a result, the Ministry of Defense recently launched a study on what it can contribute in this regard. especially since other countries of the European Union have offered and/or supplied the Ukrainian armed forces with tanks or heavily armored vehicles.

The Ukrainian diplomatic mission in Spain itself informed the ministry of its interest in the battle tanks the Spanish army had in stock – others described as abandoned – and requested their disinterested delivery.

Russian invasion of Ukraine in 2022

On February 21, 2022, the Russian government claimed that Ukrainian bombing had destroyed an FSB border facility on the Russian-Ukrainian border and claimed that it had killed 5 Ukrainian soldiers who were trying to cross into Russian territory. Ukraine denied involvement in both incidents and called them a false flag.

On the same day, the Russian government officially recognized the self-declared DPR and LPR as independent states, according to Putin, not only in their de facto controlled areas, but in all Ukrainian oblasts, and Putin ordered Russian troops, including tanks, to enter regions.

On February 24, 2022, Russian President Vladimir Putin ordered an invasion of Ukraine by Russian armed forces previously concentrated along the border. The invasion was followed by targeted airstrikes on military buildings in the country, as well as tanks entering through the Belarusian border.

So far, Russia has not recognized the invasion of Ukraine as a “war”although that is exactly what it is, claiming that it is a “special military operation”. According to the UN, in which Russia has its permanent representation, for military action to be defined as “special military operation”, it must have a resolution issued by the UN. There is no such resolution, which automatically defines Russian military actions as an invasion and war against Ukrainian citizens.

Follow us anywhere and anytime. BulgarianMilitary.com has a responsive design and you can open the page from any computer, mobile device or web browser. For more news, follow our Google News, Youtube, Reddit, LinkedIn, Twitter and Facebook pages. Subscribe to our Newsletter and read our stories in News360App in App store Where google play or in FeedlyApp in App store Where google play. Our standards: Manifesto & ethical principles.

2022-07-12
Previous Post: Sacaba beach in Malaga Spain reopens for swimming after a nasty sewage spill
Next Post: Cheapest flights to sunny destinations from £14 return this summer – including Spain, Greece and the Algarve