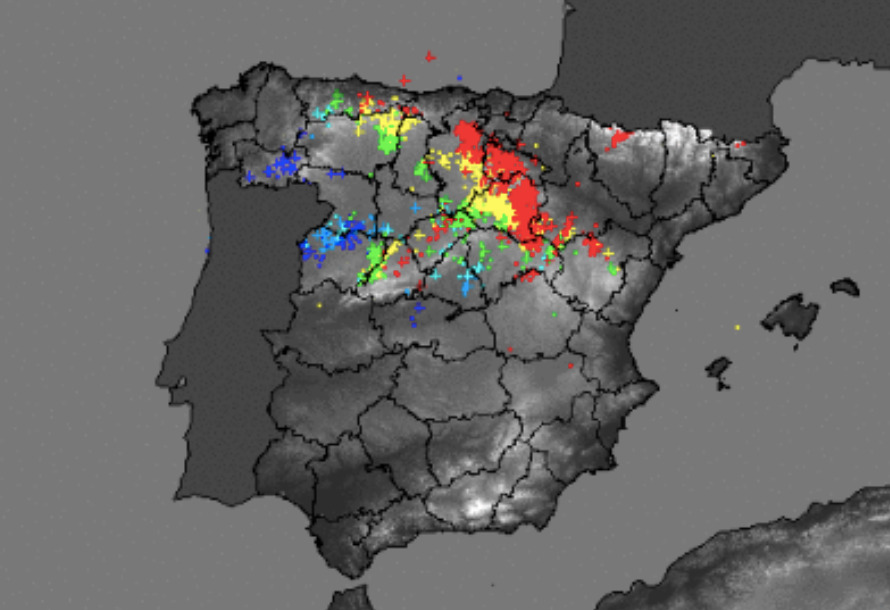 Spain sees more than 2,400 lightning strikes on Saturday, according to AEMET

This map shows the lightning strikes detected in the region for a period of 6 hours. Lightning strikes on the territory of France and Portugal are not shown on the map, but are counted in the legend at the bottom of the map.

In the selector below the map where the different times can be selected, the official time is used:

“The convective activity extends from Teruel to Asturias. Some convective cells exceed 54dBZ. Real-time access to regional radars and national composition is available at…,” reads another Tweet from AEMET along with images of energy captured on regional radars.

Convective activity extends from Teruel to Asturias. Algunas cellulas convective superan los 54dBZ. You can access in time real to the regional radars and the national composition in: https://t.co/2HVHtFZYGj pic.twitter.com/3fvZ9F2B0F

On their website, AEMET wrote more about the convective activity behind the lightning strikes:

Convective activity extends from Teruel to Asturias, Spain. Some convective cells exceed 54dBZ. Real-time access to regional radars and national composition is available on:
Reflectivity images corresponding to the lowest elevation of the radar scan (0.5° above the horizontal plane). The color scale indicates reflectivity ranges in decibels Z.

“#METEOSAT VISIBLE channel last 6h images,” reads another tweet posted by AEMET, along with images of the cloud gatherings seen over the peninsula over the past six hours that led to the lightning strikes.

The thunderstorms and ensuing lightning strikes had been previously forecast by AEMET which, for Saturday May 14, indicated that hail and showers accompanied by thunderstorms were expected in Spain in the afternoon. , specifically on the Castilian-Leonese plateau, the Pyrenees, Aragon and the Iberian Cordillera.