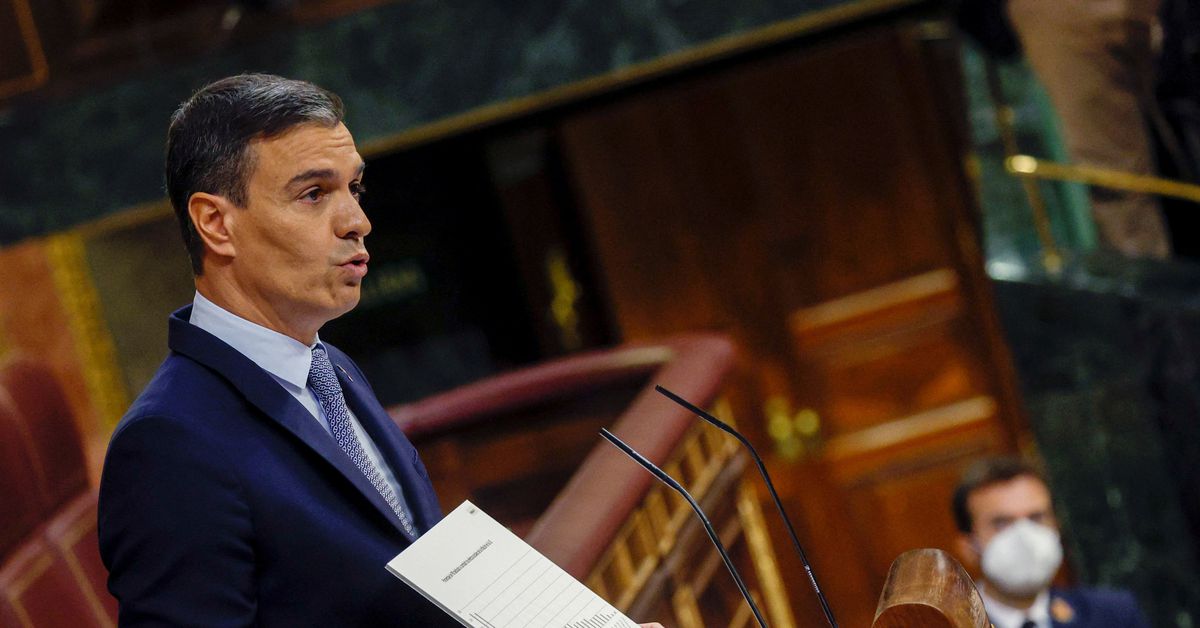 Spain’s Prime Minister Pedro Sanchez delivers a speech during the state of the nation debate at parliament in Madrid, Spain, July 12, 2022. REUTERS/Susana Vera

MADRID, July 12 (Reuters) – Spain will hit power companies and banks with temporary taxes expected to raise 7 billion euros ($7.02 billion) in 2023-24 to help Spaniards make in the face of soaring inflation, the government announced on Tuesday, triggering a massive sell-off. in some banking stocks.

Sabadell (SABE.MC) fell 12% after the announcement, while Bankinter (BKT.MC) and Caixabank (CABK.MC) fell around 10%, before paring losses.

Prime Minister Pedro Sanchez told Parliament in a State of the Nation address that the annual revenues in 2023 and 2024 from a tax on extraordinary profits from electric utilities made this year and next year are expected to reach 2 billion euros, while the surprise tax on financial institutions would bring in 1.5 billion euros per year.

Sanchez said the government would impose the tax on “big banks because they were already starting to benefit from the (expected) interest rate hikes.”

The government would not provide any details on the planned rates or how the levies would work, stating that they would only apply to companies with a turnover of at least 1 billion euros.

But analysts said banks were already under pressure due to recession fears and the possibility that any rate hikes might not be as big as expected.

“The impact on Spanish banks was immediate because this measure was not planned and it was a cold shower,” said Nuria Alvarez, analyst at Renta 4, a Madrid-based brokerage firm.

The tax would put additional pressure on lenders’ ability to generate profits at a time when their provisions are also likely to rise, she said, adding that banks with largely domestic operations were hit harder than those with more diversified activities such as BBVA (BBVA.MC) or Santander (SAN.MC), down around 3.7%.

Shares of utilities Iberdrola (IBE.MC) and Naturgy (NTGY.MC) fell between 0.4% and 0.7%. The government had already said that it was going to tax the electricity companies.

Sanchez said inflation, caused in large measure by Russia’s invasion of Ukraine, was Spain’s biggest challenge, likening it to “a serious disease of our economy that is making everyone poorer. , especially the most vulnerable groups”.

Sanchez also announced 100 euros per month of additional scholarships for students over 16 who are already scholarship holders, and free multi-trip tickets for commuter and medium-distance trains between September and the end of December.

2022-07-12
Previous Post: Cheapest flights to sunny destinations from £14 return this summer – including Spain, Greece and the Algarve
Next Post: Pokemon Scarlet and Violet Live-Action Commercial Reportedly Filmed in Spain