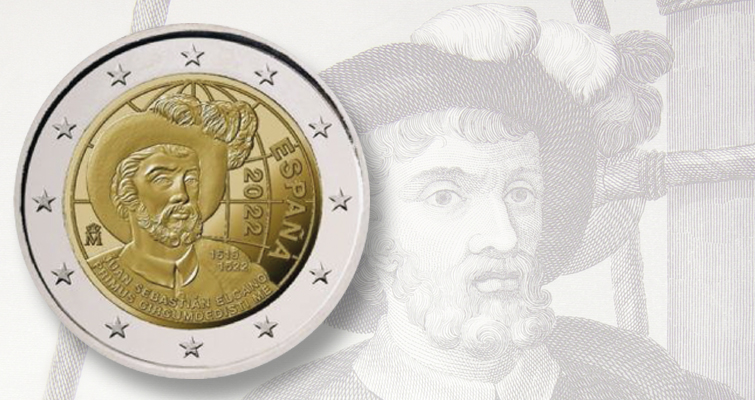 Spain to issue €2 commemorative coin in circulation for explorer

Spain will issue a commemorative circulating €2 coin celebrating explorer Juan Sebastian Elcano and the 500th anniversary of the first circumnavigation of the Earth.

Elcano completed the first circumnavigation of the Earth in the ship Victoria during Ferdinand Magellan’s expedition to the Spice Islands. Elcano was born in 1486 or 1487 and lived until 1526.

His success in the voyage to the Spice Islands led to another great expedition, this time led by the nobleman García Jofre de Loaisa, but this mission was unsuccessful and Elcano died in the Pacific Ocean during it.

An image of Elcano in period clothing appears on the obverse of the coin, with lines in the background indicating the latitude and longitude marks of a globe.

A total of 1 million coins are expected to be released at the end of March.

The ringed bimetallic part has a copper-nickel core and a copper-aluminum-nickel ring. The 2 euro coin weighs 8.5 grams and measures 25.75 millimeters in diameter.

Each nation is permitted to issue up to two different circulating commemorative designs per year, with designs of their choosing, although few nations issue the maximum number of designs.

2022-02-26
Previous Post: Questions and answers about the new cryptocurrency tax regulations in Spain
Next Post: Covid-19: Last minute of the coronavirus in Spain, live | The incidence of the coronavirus drops another 36 points to 613 cases per 100,000 inhabitants | Society