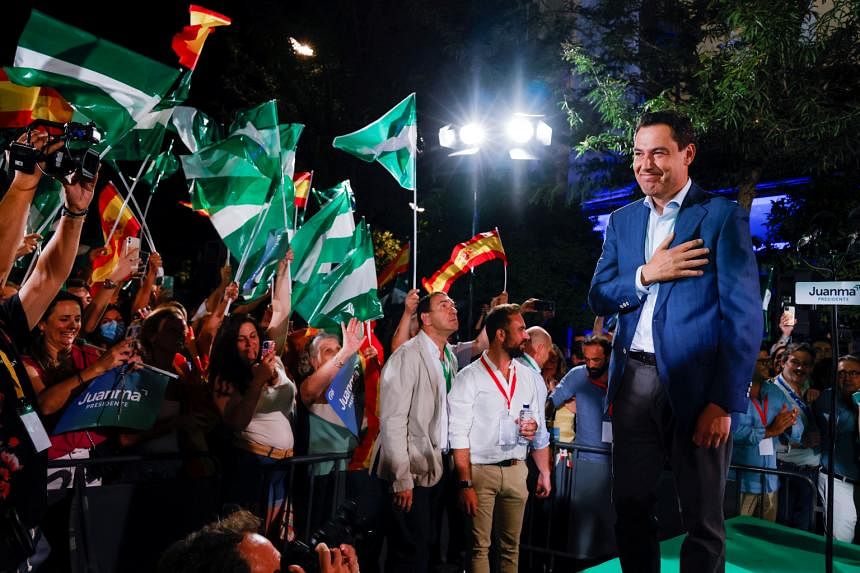 MADRID (REUTERS) – Spain’s opposition People’s Party won an outright majority in Andalusia’s regional elections on Sunday (June 19) for the first time in a Spanish democracy, boosting the new conservative leader’s chances for national elections at the end of 2023.

Andalusia, with 8.5 million inhabitants, is the most populated region in Spain. It was for 40 years a stronghold of the main socialist party, which ceded power in 2018 to a conservative coalition government led by the People’s Party (PP).

Regional leader Juan Manuel Moreno won a historic victory securing 58 seats and 43% of the votes with 99.5% of the votes counted. This will allow him to govern alone, a rare situation these days in Spain where fragmentation and political instability have made coalitions the most common form of government over the past five years.

“It’s not just a victory for the PP but for all of Andalusia,” Moreno told a crowd waving Spanish and Andalusian flags outside the PP’s regional headquarters in Seville. “Today we marked the history of Andalusia.” He said Andalusia could look forward to four years of “prosperity and improvement”.

The vote was the first test for the PP’s new national leader, Alberto Nunez Feijoo, who belongs to the same moderate camp as Moreno within the party and is seen by public opinion as having a very similar profile. This therefore suggests a good performance of the party in the national elections.

“The strategy of Moreno and Feijoo is similar. They opted for the center… This result undoubtedly brings the PP closer to the Moncloa (seat of the Spanish government),” said Pablo Simon, professor of political science at the Carlos III University.

The far-right Vox party, which was on an uptrend in recent elections, slowed its trajectory and virtually repeated the same result – adding two seats to its tally – as in Andalusia’s previous elections in 2018.

The PSOE, which is the party in national government but which relies on a junior partner and external parliamentary support, recorded its worst score in the region with only 24% of the vote.