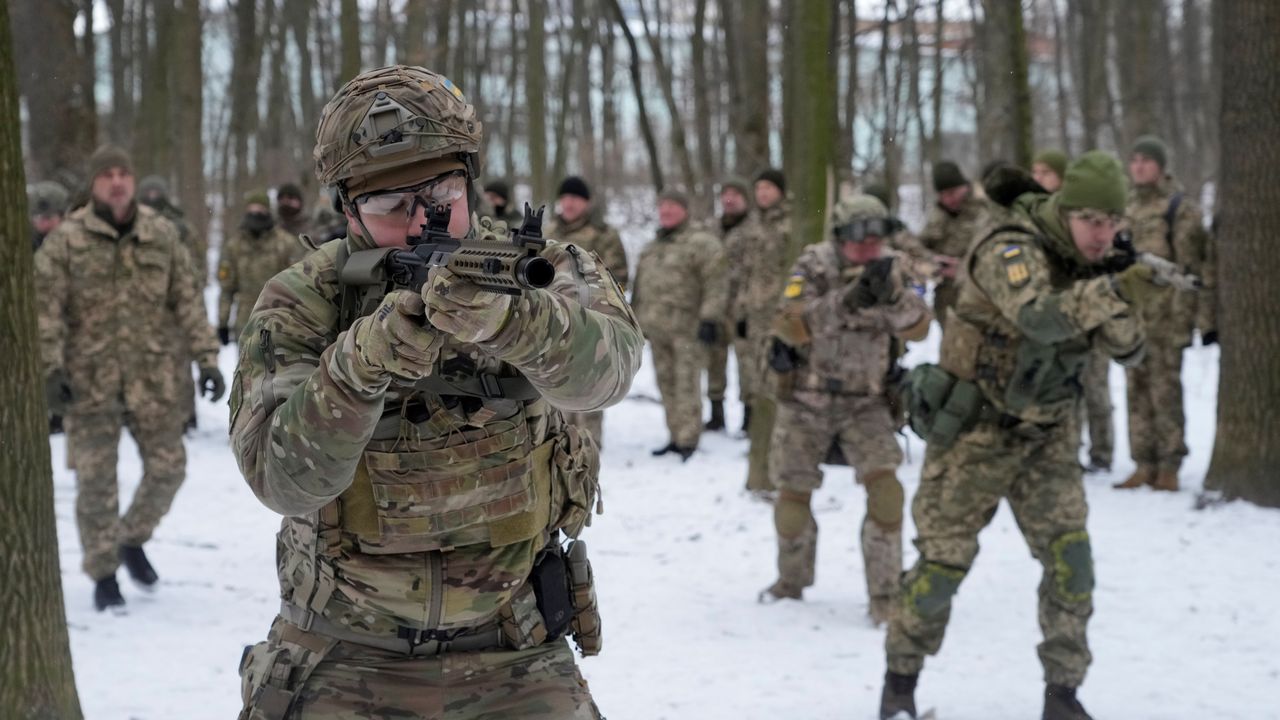 The Spanish Socialist Party (PSOE)-Podemos government’s support for NATO threats against Russia and its dispatch of warships to the Black Sea exposes a whole layer of petty-bourgeois groups in Podemos’ political orbit.

As thousands of people die of COVID-19 every day in overwhelmed hospitals across America and Europe, NATO is preparing for war with Russia. US officials said it would likely be the bloodiest war in Europe since World War II. Trying to strangle working class opposition to the imminent danger of catastrophe, these organizations are desperately trying to tie workers and youth to the pro-war Podemos party.

The war can only be stopped by the international political mobilization of the working class. This requires conscious opposition to groups like the so-called Revolutionary Workers’ Current (CRT), the Spanish affiliate of Argentina’s Socialist Workers’ Party (PTS), or the group Izquierda Revolucionaria (Revolutionary Left), formerly affiliated with the Committee for a Political factory Girl. International (IOC).

In a statement on its online publication, Izquierda Diario, entitled “Against the imperialist offensive in the Black Sea Withdrawal of all Spanish and NATO troops! the CRT absurdly states:

It seems that the leaders of Podemos did not realize that they were part of a NATO government until the military ships were sent to the Black Sea. When Defense Minister Margarita Robles announced the deployment in the coming days, [Podemos] came to express his opposition to such a decision. However, the deployment of Spanish maritime and air troops in the Black Sea had already been approved by the Council of Ministers on December 21. At that time, with the unanimous support of all parties in government, including Podemos and the PCE [Communist Party of Spain].

He later claims that the growing social opposition, reflected in the NoToWar hashtag that has been trending for days in Spain, “makes it difficult for Podemos and the PCE to maintain their current sham. But it is not impossible for them to do so. , as they have done since entering government.

This amounts to speculating on the ability of Podemos to lull workers into the imminent danger of war. The “sham” of Podemos’ attempts to portray itself as a less militaristic party than its rivals in the Spanish ruling establishment has in fact been fully exposed. It sends warships to the Black Sea and troops and fighter planes to Bulgaria.

Podemos social rights minister Ione Belarra also came out to defend the war campaign. While sending a 16-point document to defend “peace” in Ukraine, defending the “military neutrality of Ukraine”, she hastened to point out in an interview with TVE that Podemos’ differences with the PSOE do not were only “little nuances”. She also praised the “good role” played by Foreign Minister José Manuel Albares, who recently traveled to Kiev to threaten Russia with “sanctions which will be applied very quickly in the event of military aggression against Ukraine. “.

The CRT Morenoite is only the most brazen of a number of parties that portray Podemos as anti-war, even as it sends warships, fighter jets and troops to Eastern Europe.

The statement from the Revolutionary Left said the dispatch of warships was “a rather unsurprising statement of intent on the part of the PSOE, but disappointing in the case of the UP”. He concluded his statement by explaining that if only Podemos changed its rhetoric, it might be in a better position to intervene in the working class to prevent it from mobilizing against the war. He wrote:

Critics of the PSOE by Pablo Iglesias and other Podemos leaders led them to sign a manifesto that points to the responsibility of the United States and NATO in this dangerous military escalation. But just signing a manifesto is not enough… What we need is real opposition in the streets, organized against NATO, US and EU militarism. An unrealizable opposition sitting in a government that itself participates in the warmongering threat.

This amounts to nothing more than peddling dangerous illusions that Podemos will oppose war, or will spontaneously succumb to mass popular opposition to war. He therefore speculates on the organization of “demonstrations throughout the country so that the working class can mobilize against imperialism and put pressure on the government, demanding the immediate withdrawal of Spanish troops and non-intervention in conflicts far from the interests of our class”.

These forces are not content to peddle a false line about Podemos’ support for the war or the workers’ ability to “pressure” it to the left. They seek to lull the working class to sleep, while the danger of a global nuclear war and the need to organize a working class opposition to it is posed as the decisive issue on the agenda.

Rather, they aim to maintain Podemos’ straitjacket on the working class, even as it prioritizes profits over lives amid the COVID-19 pandemic that has killed more than 122,000 Spaniards, floods big business and banks with billions of euros from EU rescue funds and implements social austerity.

The pro-imperialist role of these tendencies stems from the material interests of the layers of the middle class they represent and their historical opposition to a Trotskyist program. When the International Committee of the Fourth International (ICFI) split from the Pabloite revisionist International Secretariat (IS) in 1953, IOC leader Ted Grant found a home in the IS. The Morenoite tendency led by Nahuel Moreno initially supported the ICFI, but later sought unprincipled reunification with the Pabloites in 1963.

Their hostility to the ICFI was based on claims that the road to socialism was not through the building of the Fourth International, but through pressure on the existing Stalinist, social-democratic and bourgeois nationalist movements. These forces, they claimed, could become “natural Marxists” under the pressure of objective events, circumventing the need to develop and educate Marxist cadres as leaders of the working class.

Today, CRTs Izquierda Diario gives hope that the founding Stalinist and Pabloite tendencies of Podemos will take up the historical anti-militarist positions of the Spanish workers. He writes :

[T]he historic demand of the left for the withdrawal of the Spanish state from NATO and the closure of all its military bases in the peninsula – another of the problems that the “left” [Podemos] renounced today… —we must take them up and fight… It is time for the left, which maintains positions independent of the government, with the unions and the social movements, to call for mobilizations for these basic demands to put an end to the current warmongering the escalation and resume the anti-imperialist and internationalist banners. These flags so forgotten and trampled upon by these representatives of the “institutional left” who have decided to become NATO ministers.

What the CRT proposes here is not an anti-war movement in the working class, but a political maneuver controlled by the government. The CRT demands an alliance with the union bureaucracy. However, these bureaucracies are direct agencies of the PSOE-Podemos government: the General Labor Union (UGT) is affiliated to the PSOE, and the Workers’ Commissions Union (CCOO) to the PCE and Podemos. They will not lead, but strangle a movement against the urgent danger of war in Europe, including nuclear war.

This perpetuates the reactionary role played by Pabloism and Moreism for decades to cover up the counter-revolutionary role of Stalinism.

During the Spanish Civil War sparked by General Francisco Franco’s fascist coup, the Stalinists bloodily crushed the workers’ uprising in Barcelona in 1937. After Franco’s victory and after World War II, when Spain was ruled by a fascist dictatorship in the 1950s, the PCE called for a “national reconciliation” with Spanish capitalism, based on the establishment of a capitalist parliamentary regime. He called for “peaceful coexistence” and “neutrality” between Spanish imperialism and the Soviet Union.

In 1976, as the PCE suppressed the biggest wave of strikes since the 1930s against the Franco regime, PCE General Secretary Santiago Carrillo said he was against “all foreign bases, whether American in capitalist or Russian countries in socialist countries”. For now, he added, the PCE “would accept American bases in Spain”. This was the basis of the PCE’s alliance with the PSOE amid the fall of the Franco regime and the transition to capitalist parliamentary rule in 1978.

Podemos continues these rotten traditions. Before entering government with the PSOE, Podemos had already called on Spain to remain in NATO and defended the sale of warships to Saudi Arabia so that its arms industry could take advantage of the bath of blood in the Middle East. He recruited former Chief of the Defense Staff Julio Rodríguez, who led the Spanish military’s participation in the US-led neo-colonial wars in Afghanistan and Iraq and who played a major role in the NATO war against Libya in 2011.

Once in power, Podemos aligned itself increasingly closely with NATO’s wars in Afghanistan and Libya, retained the four US military bases in Spain, and supported the country’s increased arms sales. Spain to a record 22.5 billion euros, including the bloody Saudi war against Yemen. . He voted for the latest military budget, which rose 9.4% last year, beating its previous record of 19.7 billion euros in 2020 to 21.6 billion euros in 2021.

Thus, the leader of Podemos and former Deputy Prime Minister Pablo Iglesias could boast cynically to Italy Corriere della Sera in 2020: “Even the leader of the largest communist party in the West, Enrico Berlinguer, had failed to get to where I am: a Marxist in a NATO government.

The danger of war can only be fought by building an anti-war movement in the working class that is irreconcilably opposed to Stalinism and all its allies and apologists. This requires a political struggle based on the history and international program of the ICFI, aimed at building sections of the ICFI in Spain and internationally as the political leadership of the working class.

Review of the WSWS

What is the pseudo-left?

This review examines the response of pseudo-left political tendencies internationally to major global political events of the past decade.