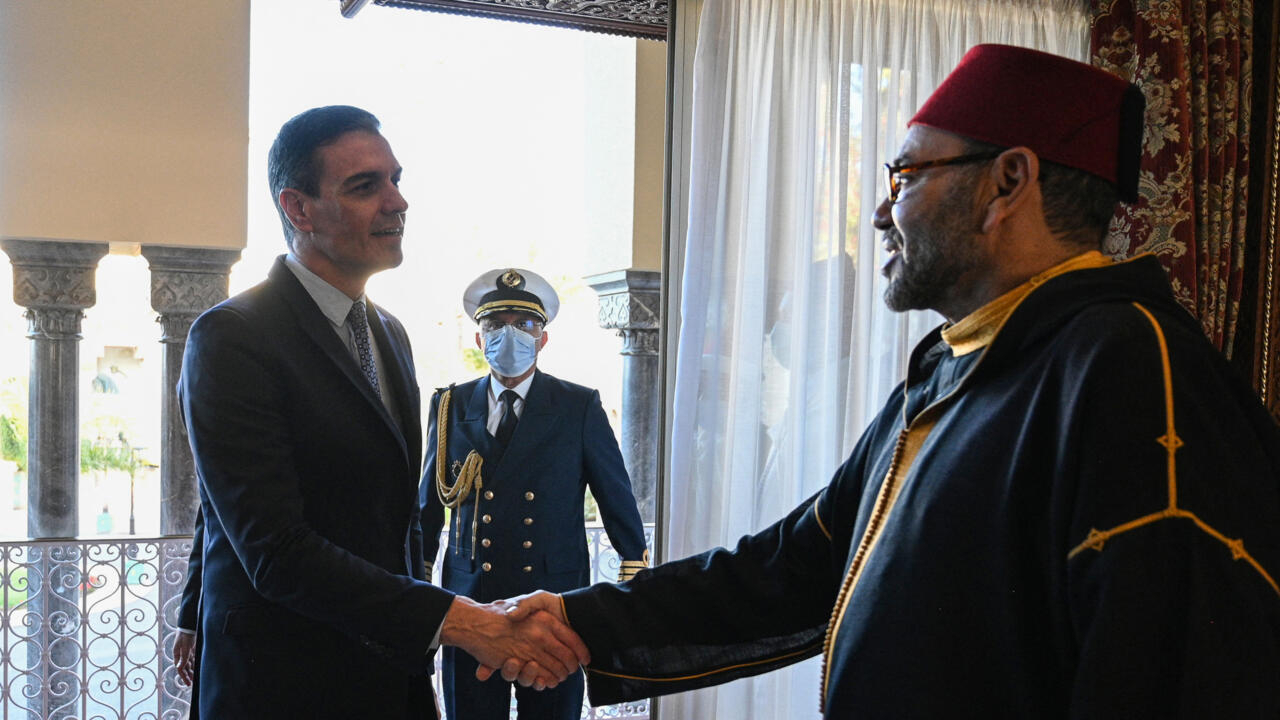 Morocco’s King Mohammed VI hosted Spain’s prime minister on Thursday in a historic visit ending a year-long diplomatic crisis, after Madrid overturned decades of neutrality on the Western Sahara conflict in a reversal that has angered Algeria.

Prime Minister Pedro Sanchez and Foreign Minister José Manuel Albares received a red carpet at Rabat’s main airport before heading to talks with the king followed by an iftar – the evening meal of the month holy muslim of ramadan.

The visit aims to draw a line under a major standoff between the two countries.

But the decision to abandon Spain’s longstanding neutrality over Western Sahara sparked a domestic backlash, with Spain’s parliament condemning the move on Thursday in a motion tabled by a Sanchez coalition partner.

The diplomatic crisis began a year ago when Madrid authorized Brahim Ghali, leader of the Polisario Front which claims the independence of the territory of Western Sahara, to be treated for Covid-19 in a Spanish hospital.

Morocco, which accuses Ghali of war crimes, views Western Sahara as an integral part of the kingdom and a highly sensitive issue of security and national pride.

The desert territory has rich Atlantic fishing waters, phosphate resources and a route to lucrative markets in West Africa.

Morocco waged a bitter war against the Polisario after the withdrawal of Spanish colonial forces in 1975.

Weeks after Ghali was hospitalized, more than 10,000 migrants stormed into Spain’s small North African enclave of Ceuta as Moroccan border forces looked away, in an incident meant to punish Madrid.

On March 18, Madrid announced a “new stage” in relations and said it now supports the North African kingdom’s plan for the territory: limited autonomy under Moroccan sovereignty.

Speaking to reporters after his meal with the king, Sanchez hailed the “historic moment”.

He said they had agreed “on a clear roadmap that allows issues of interest to be managed in a concerted manner, in a spirit of normality and good neighborliness, with no room for unilateral acts.”

He also said the countries would work to restore normal border traffic between Morocco and Ceuta as well as the neighboring Spanish enclave of Melilla.

Spain’s move, widely seen as a victory for Morocco, infuriated regional rival Algeria, which has long backed the Polisario and also supplies large amounts of natural gas to Spain.

Algiers last month recalled its ambassador from Madrid to protest the move, and state-owned energy giant Sonatrach warned on Friday that it could raise the price of its gas sales to the country.

Sanchez also faced a national backlash over the move.

Parliament denounced its reversal of a “historic” position, in a motion presented by its coalition ally Podemos.

This approach “de facto amounts to supporting the path proposed by Morocco by abandoning the bases of a mutually acceptable political solution”, indicates the motion, adopted by 168 members.

Sanchez defended the move, saying the crisis with Morocco needed to be resolved.

In a statement Thursday evening, the Moroccan royal palace said that the two men had “reaffirmed their desire to open a new phase in relations between the two countries, based on mutual respect and trust, permanent consultation and cooperation honest”.

Independence in a hurry

For Spain, the main goal of repairing the fences was to secure Morocco’s cooperation on irregular migration – which observers say Rabat has often used to pressure Madrid.

For Morocco, the question of Western Sahara is the absolute priority.

“In the long term, the independence movement’s diplomatic room for maneuver is shrinking more and more,” said Riccardo Fabiani, director of the North Africa project at the International Crisis Group think tank.

Rabat controls 80% of Western Sahara, which the UN considers a “non-self-governing territory”.

The Polisario waged a long armed struggle for Morocco’s independence before reaching a ceasefire in 1991 on the promise of a self-determination referendum.

But he has claimed regular, sometimes deadly, attacks on Moroccan forces since the declaration of a null and void ceasefire in November 2020.

Former US President Donald Trump recognized Morocco’s sovereignty over the region the following month, and Rabat has since stepped up efforts to get other world powers, notably within the European Union, to follow suit.