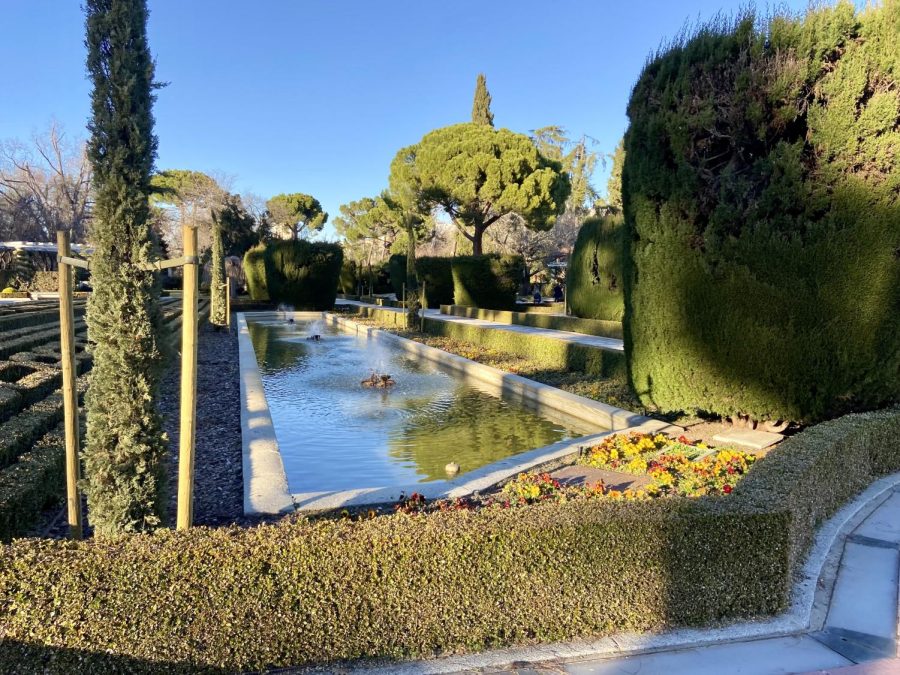 Stroll through the Retiro and travel through art – The Shield

Hey ! After getting to know me through my presentation article, I hope you’ll join me for a closer look at what I’ve been up to for the past few weeks. My main goal for this first month is to really understand my neighborhood and explore what is close to me. I also had the opportunity to do a day trip outside of Madrid. In this article I will tell you a bit about where I live in Madrid and show you a bit of Spanish culture through the art available in the city.

Retiro is a peaceful neighborhood with elementary schools, apartments, cafes and bars scattered throughout. However, the biggest attraction in Retiro is the famous Retiro Park. Known as one of the lungs of Madrid, the park is full of nature with gardens and lakes taking up most of its space. In addition to the natural look of the park, there are also many monuments, art exhibits, and even a small palace to enjoy.

During my walk in the park, I came across places that amazed me. The first stop I made, the Cecilio RodrIguez Garden, was a complete accident, but definitely worth the pit stop. As I entered the garden, the neatly trimmed hedges fascinated me with their intricate symmetry around the fountains and small pools of water. Then I found the next surprise in the garden: a flock of peacocks. These wonderful additions to the park were the last things I expected to see.

After my chase through the garden, I continued to the Monument to Alfonso XII next to the largest lake in the park. The monument is erected in a semicircle with a statue of Alfonso XII riding a horse in the center. It is beautifully adorned with statues of religious significance and historical influences from Spain. The lake was adorned with several small boats. The sun there cast a honey orange hue and cast long shadows on the landmarks surrounding the lake, creating a perfect sunset.

Leaving the Alfonso XII monument, I continued to the Crystal Palace, a space used for art exhibitions hosted by the famous Museo Nacional Centro de Arte Reina Sofía. The Palace is located in front of a small lake with bay windows forming the roof of the building. This aspect gives a very natural beauty to his presentations, like the exhibition I was able to see of Kidlat Tahimik. His work in this exhibition consists of wooden sculptures depicting colonial violence.

Besides these attractions, I was also able to see La Rosaleda (a garden that has more than 4000 roses), Fuente del Ángel Caído (a fountain with a statue of a falling angel) and the Palacio Velázquez (a palace dedicated to exhibitions of art). The least we can say is that the Retiro Park is very impressive, and I still have a lot to explore inside.

Another highlight of Madrid is the impressive offer of museums that contain art from different stages of history. More recently, I took a tour of the Museo Nacional Centro de Reina Sofía. This national museum is one of the largest modern and contemporary art museums in the world. It contains works by Dalí, Picasso and other artists of that time.

We toured the 20th Century Art Collection, which celebrates the changing times and how artists continued to find ways to paint in meaningful ways despite the advent of cameras. This was achieved by creating cubism and moving away from realism, or painting things according to how they looked in real life.

After cubism there was another movement towards surrealism with one of its pioneers being Dalí. Coming from the Catalan Autonomy of Spain, Dalí usually painted things he had seen as a child as well as the love of his life, Gala. Without a doubt, it is likely that in a painting by Dalí, Gala appears.

We concluded the visit by seeing the “Guernica”, one of the most famous paintings in the world. This painting by Picasso was made during the Spanish Civil War at the request of the Republicans, but in the end they rejected it and sent it to a world exhibition that ended in New York. The inspiration for the “Guernica” was drawn from a bombing that destroyed an innocent village in northern Spain. Franco authorized this bombing at Hitler’s request for a test sight for a new bomb development.

The painting measures approximately 11′ x 25′ and retains the cubist style that Picasso is known for. Taken to pieces, one can see the depictions of wounded animals, a weeping woman with her lifeless child, the fading symbol of peace (a dove), a wounded soldier and others with looks of despair and distress.

Madrid’s natural beauty offering is heightened by the fact that it is an artistic hotspot, making it a city beautiful enough to suit anyone’s niche. Seeing the history not just of Madrid but of the whole world through the eyes of artists in times of major change is a unique and meaningful experience.