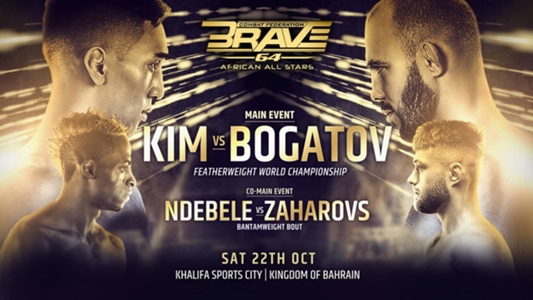 African All Stars is locked and loaded. The second leg of the three-part Kombat Kingdom festival – streamed live on DAZN – is officially following the conclusion of today’s weigh-in ceremonies which took place at the Khalifa Sports City Arena.

That said, ten international gladiators from around the world have been selected for this capital card. After successfully gaining weight, these ten athletes expressed their appreciation for today’s lively looks. Burkina Faso fans Israel Mano and Frenchman Remy Serge seemed happy to be in the midst of a week-long fight from an international organization as they took to the stage before getting their emotions under control. focus and look into each other’s eyes before their Amateur Light Heavyweight fight. Usually calm South African Brendan Lesar put on an excited face as he lined up to take on BRAVE CF debutant Bahrain’s Zagid Gaidarov ahead of their Super Welterweight duel.

Africa’s Zulu warrior, Mzwandile ‘Snakebone’ Hlongwa appeared to draw inspiration from his ancestry as he took to the stage with an intense look in his eyes before coming face to face with number one middleweight Abusupyan Alikhanov before their middleweight fight. The two warriors got so close that a lock of hair could barely divide the space between them, forcing BRAVE CF President Mohammed Shahid to put out the flames of intensity as he asked the athletes to face the cameras and the fans .

Delighted to represent Africa on this special card, Nkosi “The Future” Ndebele from South Africa approached the platform wrapping his home country’s flag around his shoulders as if he were Superman, moments later, actually called out bantamweight champion, Brad “Superman” Katona after staring his Latvian opponent, Matiss Zaharovs in the eye before their co-main event at bantamweight.

However, Zaharovs quickly tried to put out the flame of the number five ranked bantamweight. “I will stop his winning streak and I will be the second to lose his record,” added Zaharovs.

The main event saw South Korea’s Tae Kyun Kim and Russia’s Roman Bogatov end the weigh-in ceremony on a warm but light note. Ahead of their vacant BRAVE CF featherweight title fight, Kim and Bogatov enjoyed a few banter before Bogatov complimented Kim on her flashy undertones. Respect was the order of the day, but both athletes made it clear that they would step into the BRAVE CF cage tomorrow for one thing and one thing only…the BRAVE CF featherweight belt.

“I have come a long way to get here, since my childhood I have been preparing for this moment and for this title. Tomorrow I will become the second Russian BRAVE CF champion,” Bogatov said.

Kim – who proudly kissed her South Korean flag implored fans to tune in and watch history be made. “There is no expectation, but I will give everything I have to become BRAVE CF’s first South Korean champion. “I will bring a hell of a fight for BRAVE CF fans and MMA fans from around the world…expect a big fight.”

2022-10-22
Previous Post: Wealthy by Design: The World’s Richest Architects – From China to Spain and the US to the UK
Next Post: Ogier masterclass distances his rivals in Spain