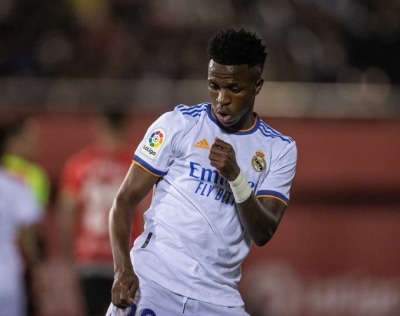 After the controversy surrounding Vinicius’ dance celebrations, Paris Saint-Germain striker Neymar Jr. has openly defended Vinicius online. Atletico Madrid captain Koke Resurreccion has warned that ‘there will be problems’ if Vinicius celebrates in the same way this weekend at the Wanda Metropolitano with Neymar at his side.

Neymar wants Vinicius to put in a solid performance when Real Madrid travel to the Wanda Metropolitano on Sunday as Koke’s comments don’t seem to have affected his frame of mind. The PSG striker wants Vinicius to score a goal against Atletico.

Vinicius, a Real Madrid player, has been criticized for his exuberant dancing after scoring goals.
The 22-year-old has been racially harassed over remarks made about his dancing, which has been compared to monkeys. Neymar, who is used to dancing to celebrate goals, nevertheless gave his support to the young striker.

Everyone has experienced the rush to happiness that follows a goal. Pumping your fist in the air, hugging teammates or, like Vinicius Jr., smiling and dancing next to the corner flag, it’s all a form of celebration. The exquisite Brazilian dances not only express the enjoyment of the player, but also brighten up the lives of thousands or millions of followers around the world.

But there will always be those who can’t stand the happiness of others. One of them is Pedro Bravo, a guest on Spanish football show Chiringuito de Jugones, who called Vincius Jr.’s dance celebrations disgustingly racist in his remarks.

The conversation started outside the studio when Atlético de Madrid captain Koke said ‘there would be problems’ if Vincius Jr. scored for Real Madrid in the upcoming derby on Sunday and chose to dance to celebrate. The problem is that Koke’s quote has been discussed, scrutinized and dissected on Chiringuito de Jugones. Pedro Bravo then abruptly uttered his now famous words about her.

If you want to dance the samba, go to the sambódromo. Here, what you have to do is respect your colleagues and stop playing monkey.

Bravo then later apologized but it was too late as the damage was done.

Neymar was playing in the front row and received a yellow card this week after celebrating the same way he has all season. The PSG striker asked Vinicius to keep dancing after every goal in an Instagram story.

📲 Neymar on IG: “Dribble, dance & be you! Happy as you are. Go ahead my boy, next goal we dance 🕺” pic.twitter.com/NVLFpaDD3d

The Real Madrid club as a whole issued a press release denouncing any act of racism directed against its players and pledging to take legal action.

Even Barcelona’s rivals came to support the player.

Football legend Pele has also thrown his support behind the Brazilian.

This Sunday in La Liga at the Metropolitano, Real Madrid take on city rivals Madrid in the El Derbi de Madrid.
Because Karim Benzema is out through injury, everyone focused on Vinicius, the Frenchman’s attacking partner, and his celebrations. Neymar has expressed his wish to see Vinicius score against Atlético Madrid in response to the criticism the talented striker received ahead of the match.

2022-09-18
Previous Post: “Letizia was an abrasive princess but as Queen of Spain she is better”
Next Post: Students Reflect on Summer Study Abroad in Spain – The Crow’s Nest at USF St. Petersburg