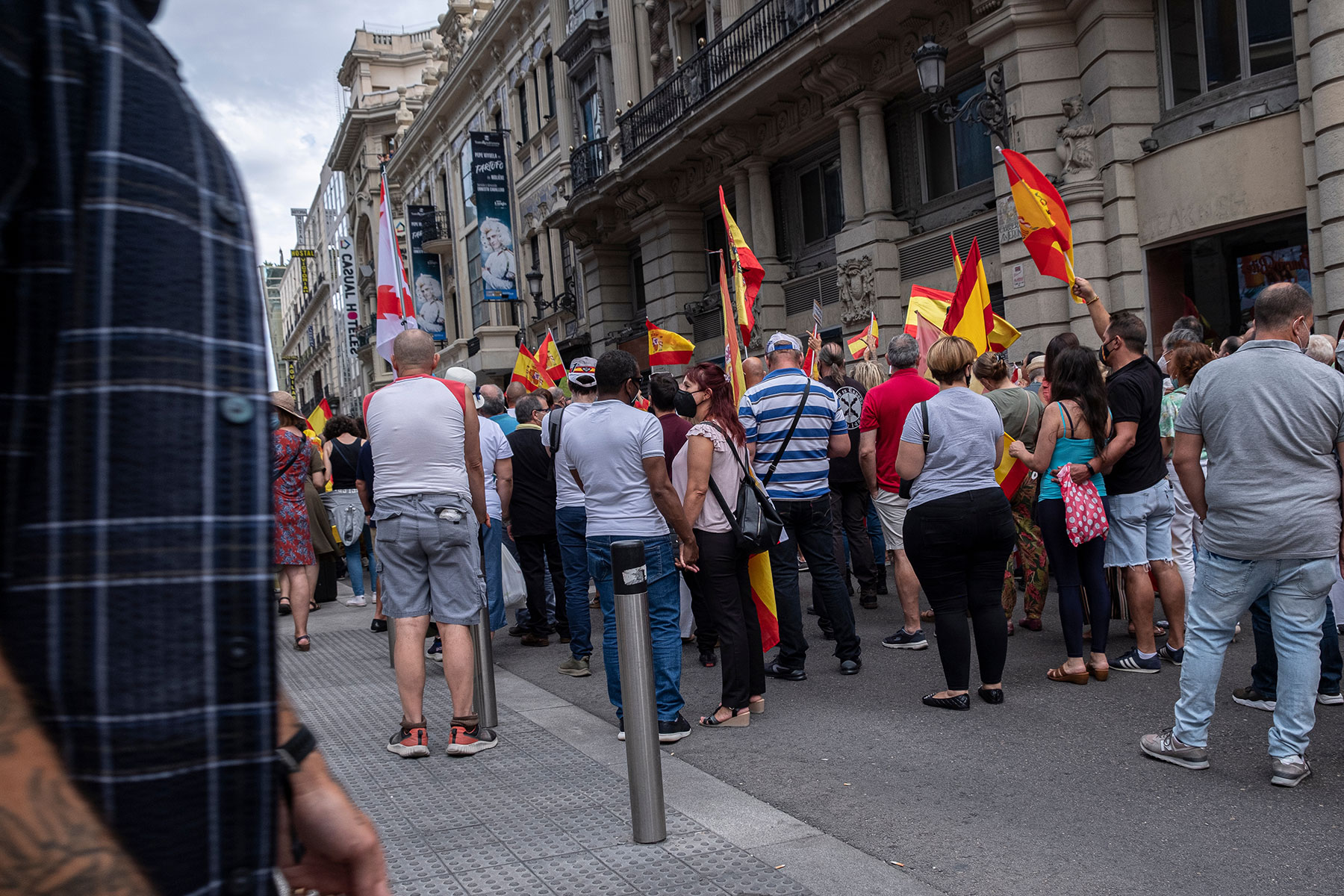 What Spain is doing to counter the far right

The outlawing, the inclusion of certain groups or organizations on the terrorist list, has become a crucial counterterrorism initiative adopted by liberal democratic governments. Despite the criticism that the ban sparked that it happened at the discretion of each state, it has proven to be an effective preventive strategy.

Since the UK’s ban on far-right National Action in 2016, other countries have followed suit. In Germany, groups like Combat 18 and Citizens of the Reich have been banned as terrorists. Canada did the same with Combat 18, Blood and Honor, Three Percenters, Aryan Strikeforce and the Proud Boys.

The role of animals in National Socialist propaganda

Spain has also designated some organizations as terrorists. Their lawsuits have affected the nature and activity of the far right nationally.

Hatred and radicalization in Spain

In 2017, the SM educational foundation launched a study on the behaviors and attitudes of Spanish millennials. The study uncovered the growing ideological radicalization of this generation, as one in five young people (out of a total sample of 1,250) supported either the far left or the far right.

Four years later, Spain witnessed an anti-Semitic speech given to 300 participants at an event held at the Almudena Cemetery in Madrid to commemorate the Azul Division (Blue Division), a group of 14,000 young people. men who fought for Adolf Hitler in World War II. Torn between perplexity and indignation, the Spaniards wondered about the speaker but also about the speech.

The inflammatory speech was delivered by Isabel Medina Peralta, an 18-year-old history student, member of the Francoist La Phalange (La Phalange) party and a self-proclaimed fascist and National Socialist. His comments are currently under investigation by the Madrid prosecutor’s office as a hate crime.

The Medina case is just the tip of the iceberg of a much larger problem: the growing presence and importance of extremist groups in Spain. This increase has been in part due to a growing sense of dissatisfaction with political elites and increased immigration, with the subsequent perception of the economic and cultural threat this can pose.

It is these factors which, in turn, have facilitated the relative success of far-right parties like Vox, which was founded in 2013 and holds 52 seats in the Spanish Congress of Deputies, the lower house of parliament. Spain has ceased to be an “exception” among European countries that have seen a steady growth in right-wing radicalism since the mid-2010s.

Spanish law does not condemn any manifestation of Nazi and Fascist symbology, unless it is linked to criminal behavior. In other words, it does not punish the display of extremist symbols unless they are accompanied by active behavior. It is criminal actions and messages that get law enforcement involved, rather than the use of symbols. Mere posting does not make the act a crime. The only exception to this rule is Law 19/2007 of July 11 against violence, xenophobia, racism and intolerance at sporting events. The law states that displaying Nazi symbology could result in a fine of up to € 3,001 ($ 3,400) and a ban from participating in any sporting event for six months.

However, certain laws in force in Spain could be used to allow the prohibition of extremist groups. For example, the Spanish Penal Code, in particular Article 510, states that those who publicly encourage, promote or incite hatred, hostility, discrimination or violence against a group because of their ethnicity. , their religious beliefs or their gender identity will be “punished with imprisonment.” one to four years and a fine of six to twelve months. This also applies to those who produce or disseminate material that encourages, promotes or incites violence against groups.

Section 510 also allows for the prosecution of those who publicly deny, trivialize or extol genocide and other crimes against humanity. Article 515 of the Spanish Criminal Code could also be applied in prosecution and prohibition proceedings. Article 4 of this article specifies in particular that associations or groups are punishable if they encourage discrimination, hatred or violence against persons, groups or associations because of their ideology, religion or beliefs, ethnic origin. or kind.

Where the Spanish penal code would not be sufficient to outlaw an extremist group, the Rome Statute of the International Criminal Court can be used. Article 7 on crimes against humanity specifically states that a group can be prosecuted under international law if it is responsible for the persecution of a community or a collective on political, racial, national grounds. , ethnic, cultural, religious, gender or others. When they incite, encourage or motivate such persecution, international law must be applied as a preventive measure.

The proscription in Spain began with the dissolution of the neo-Nazi organization Sangre y Honor (Blood and Honor) by Spanish judges, who sentenced 15 of the 18 defendants to prison terms of up to three and a half years . Several extremist groups remain active in Spain today.

Democracia Nacional, a far-right party founded in 1995, is one example. Its current leader, Alberto Bruguera, and 14 other party members were charged by the special prosecutor with hate crimes for attacking a mosque in Barcelona’s Nou Barris neighborhood in 2017. The prosecutor requested a 10-year sentence for his chief. Party vice president Pedro Chaparro was also accused of threatening photojournalist Jordi Borras in 2015.

Another problematic group is Alianza Nacional. In 2013, a judge in Vilanova i la Geltru, a town in Catalonia, sentenced three leaders of the organization to two and a half years in prison for spreading Nazi ideology online. Their message spread hatred against black and Latinx groups as well as immigrant communities and liberal multiculturalism. They accused these groups of taking jobs from the Spaniards, as well as encouraging the use, abuse and trafficking of drugs, among other crimes.

Hogar Social is a neo-Nazi group well known for their campaigns to collect and share food “only for the Spaniards” as well as for squatting buildings. Some of its members were prosecuted and were to be tried in December 2021 for incitement to hatred and attack on a mosque in March 2016 after a terrorist attack in Brussels, Belgium. They face potential sentences ranging from one to four years in prison. The leader of Hogar Social, Melisa Jimenez, was arrested in 2020 and then released for attacking the headquarters of the Socialist Party and showing resistance to the authorities.

Bastion Frontal is a neo-Nazi group linked to the French organization Social Bastion. It was created during the COVID-19 pandemic in the working-class neighborhood of San Blas in Madrid. The group claims a hundred active members aged 15 to 25. The creation of Frontal Bastion was primarily sparked by the decline of Hogar Social and the rise of VOX, but he doesn’t identify with the latter because of it. being a constitutionalist party. Instead, Bastion Frontal aims to abolish the Spanish Constitution. Although its members claim to have a physical headquarters, Frontal Bastion’s presence is predominantly online. The Madrid prosecutor’s office has filed a complaint against the group for hate crimes due to its threats against unaccompanied minors from Africa, including Morocco.

Spanish society is going through a process of polarization, which has been underlined by academics and civil society actors. The situation, as academics have mentioned, worsened remarkably during the pandemic, mainly due to the amount of time people spent in front of their screens. In particular, young adults are among the most vulnerable. In this context, isolationism and echo chambers have further contributed to the strengthening of an already growing far right.

The Spanish practice of prosecuting the perpetrators of human rights crimes is only a relatively effective strategy, as it focuses on the individual rather than the social, economic and ideological networks on which the individual has touched. supported to commit violence.

*[Fair Observer is a media partner of the Centre for Analysis of the Radical Right.]

The opinions expressed in this article are those of the author and do not necessarily reflect the editorial policy of Fair Observer.